The rally, “Fund Care, Not Cops,” was co-sponsored by Metro D.C. Democratic Socialists of America, and other organizations like Empower D.C. and 350 D.C. The gathering followed a slew of protests and demonstrations in the United States after the police killings of George Floyd and Breonna Taylor in recent months.

Maryland resident Nagari Irby said he has protested against police brutality for 12 days despite being kettled by police during the Swann Street incident last week. He said keeping the energy and momentum going is what will create real change.

Mayor Muriel Bowser told Black Lives Matter organizers that she would not reconsider the 3.3% increase in the Metropolitan Police Department’s more-than-$500-million budget this year. Bowser’s budget also calls for cutting more than 50% of funding for outreach to people experiencing homelessness.

Maryland State Delegate Gabriel Acevero, one of the speakers at the rally, led the crowd in chanting, “No justice, no peace” and “No racist police.” He told protesters to remember that action is required at both the state and federal level, and that they must urge their legislators and representatives to both defund the police and get rid of laws that reinforce systemic racism. 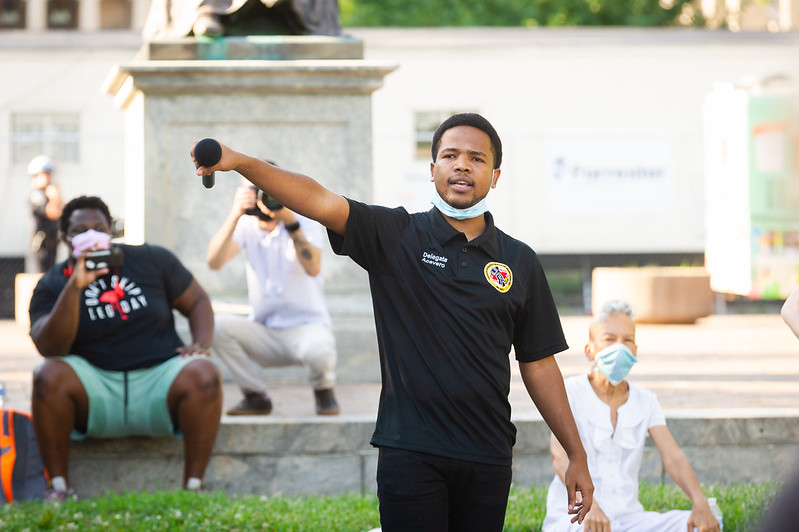 Maryland State Delegate Gabriel Acevero holds out a mic to the crowd at John Marshall Park. Photo by Rodney Choice.

“This is not only about a moment, but we all know this is about a commitment to a movement,” Acevero said. “A movement that not only values Black lives, but recognizes that we must dismantle the systems and the policies that historically have rendered Black lives disposable.”

Ed Lazere, a candidate for D.C. Council At-Large, said in an interview he is “frustrated” that the budget for D.C.’s police department continues to grow each year.

“We know that the police aren’t keeping us safe, and in fact are in many ways harassing and abusing the community,” Lazere said. “I’m here to send the message that ‘defund the police’ means we need to focus on investing in the community – that’s the way to create real safety.”

Protesters gathered at John Marshall Park before the march. Photo by Rodney Choice

Rally organizers urged attendees to sign petitions asking the mayor to defund the police and put more money in social projects like affordable housing and public schools. The D.C. Council will hold several budget oversight hearings today, including a virtual hearing for the Metropolitan Police Department at noon where residents can testify about their experience with police officers.

Jacquelyn Smith, a member of the Metro D.C. Democratic Socialists of America and an organizer for the rally, said she was “gravely disappointed” in the budget increase for MPD, while anti-violence programs and housing services continue to get cut.

Smith said activists should join the more than 15,000 people who have submitted testimonies to the D.C. Council about MPD and voice their budget concerns. She added that organizers would also be offering to film three-minute testimonies for people attending the rally.

“It’s really important that this isn’t just a flash in the [pan], and that we maintain momentum and really apply pressure to our elected officials and our decision makers – we don’t want them to think that this is just something that they’re going to wiggle out of, that they can just bear the PR damage,” Smith said. The group gathered around 5:30 p.m. and began to march at 6:20 p.m. Activists chanted “no Trump, no KKK, no fascist U.S.A,” and carried signs that said “Black Lives Matter” and “Abolish the Police” as they walked down Indiana Avenue, past D.C. Superior Court. The protesters stopped briefly outside of the Trump International Hotel before entering Freedom Plaza.

Janeese Lewis George, the winner of the Ward 4 Democratic primary for D.C. Council, addressed more than 200 activists in Freedom Plaza.

“A lot of people have said to me, ‘oh, don’t use the word defund because it makes a lot of people uncomfortable,’ and I said, ‘were people as uncomfortable when they defunded education?’” Lewis George said. “What we’re saying to you is that you have had too much of continuing to divest from our communities and to take from our communities and continue to do it and we are tired.”

Lewis George received pushback from her opponent in the primary, Ward 4 Councilmember Brandon Todd, for her platform to cut the police’s budget. Democrats for Education Reform-D.C., a group that had endorsed Todd, sent out a mailer campaign depicting Lewis George as anti-police just as George Floyd and Breonna Taylor’s deaths gained national attention. The group’s director issued an apology on June 7. Reginald Black, the advocacy director for the People for Fairness Coalition and a Street Sense Media vendor, said the police should be defunded because there are too many people in the District who still need housing. Black also called for protesters to remember the more than 100 people who died without a home last year when they think about where funding should be allocated.

[Read more: Activists march to remember 117 people who died without homes in DC]

“Poverty is the catalyst to state violence,” he said. “That is what the real fight is about. We are fighting for a place to be and exist and make sure that we are valued.”

This article previously stated that Ward 4 Councilmember Brandon Todd’s reelection campaign sent the mailer attacking opponent Janeese Lewis George’s public safety platform. It has been corrected to indicate that a third-party organization that had endorsed Todd sent the mailer to Ward 4 constituents independently.