77 formerly homeless veterans will be the first residents of The Parks at Walter Reed, followed by 134 low-income seniors

Chad Jackson, a vendor for Street Sense Media and a formerly homeless veteran, served as a welder in the military from 1993 to 2000. When he returned home after his service, Jackson instantly felt the need to escape.

He chose to live on the streets rather than stay with his addiction-ridden parents, but he ended up running into crime there. He was charged with possession after dealing cocaine, and he was sentenced to a decade in prison.

Before his incarceration, Jackson suffered a severe brain injury that occurred when he was hit by a bedpost after his time in the military. Jackson was also diagnosed with bipolar disorder and post-traumatic stress disorder.

He ended up back on the streets after his time in prison, but after enduring a seizure in 2017, Jackson obtained help from the D.C. chapter of a national nonprofit that provides housing, employment and counseling services — U.S. Vets, whose members took Jackson under their wing after seeing that he clearly needed assistance. Now, Jackson is one of 77 veterans receiving housing this fall at The Parks, a new community being built at the former Walter Reed campus in Ward 4. He and the other veterans should be able to move into their new housing in the renovated Abrams Hall by the end of the month, according to one of the developers.

The Walter Reed Army Medical Center in D.C. shut down in 2011 after the military hospital relocated to Bethesda, Maryland, to combine with the National Naval Medical Center. The move resulted in 110 acres of surplus land, which was initially offered to non-military federal agencies. The General Services Administration and the State Department requested some of the land for a foreign missions center, leaving 66.5 acres in Northwest D.C. for transfer to the D.C. government and ultimately new development on prime land between Georgia Avenue NW and Rock Creek Park. 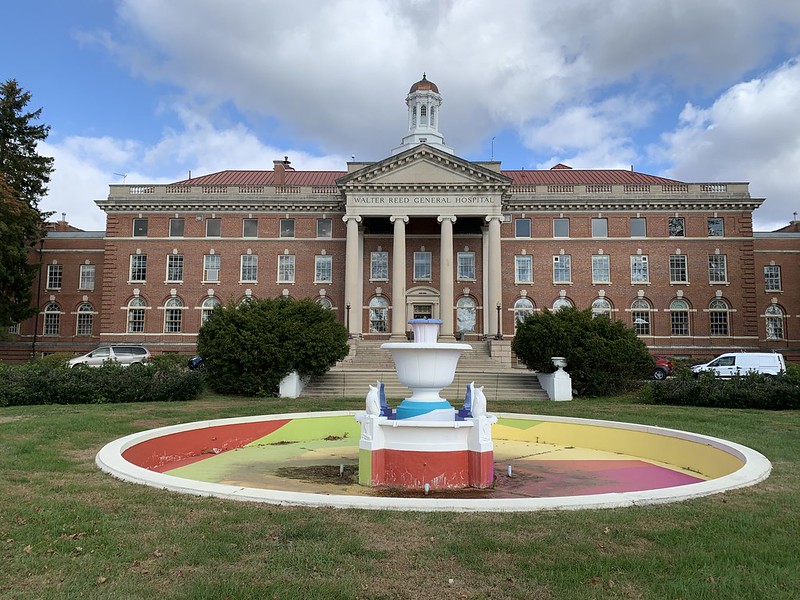 The decision to create the new Walter Reed National Military Medical Center stemmed from the 2005 review process under the Base Closure and Realignment Act, which recommended the closure of 33 military bases and the shrinking or expansion of 29 others.

From 1988 to 1995, the McKinney-Vento Homeless Assistance Act mandated that officials preparing to sell surplus federal land — including military bases like the Ward 4 campus — consider the site’s potential use in assisting people experiencing homelessness. But the subsequent Base Closure Community Redevelopment and Homeless Assistance Act of 1994 exempted large parcels of surplus land and instead required “a community-based process wherein representatives of the homeless and other community groups participate in local reuse planning,” according to a guidebook prepared by the U.S. Department of Housing and Urban Development about the process.

Those are the procedures that governed the former Walter Reed campus as D.C. officials, under multiple mayors, oversaw the creation of a master plan for the site and selection of a development team. Seven of the 30 applicants for “public benefit conveyance” of space within the new development were incorporated into the project: three homeless assistance providers — So Others Might Eat, HELP USA, and Housing Up — along with a relocated D.C. Fire and Emergency Medical Services Department station, two charter schools, and a specialty-care center for Howard University Hospital. The fire station and the Delano Hall campuses of both the D.C. International School and Latin American Montessori Bilingual School have already opened. 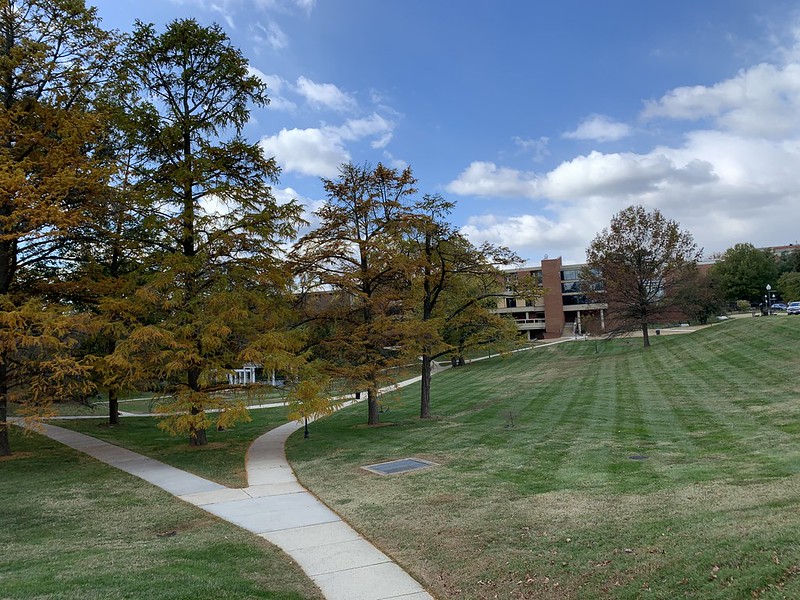 As laid out in 2014, the development plan anticipated creating 4,500 construction jobs, 1,600 permanent jobs, and 2,000 residential units — using the vast campus for “an integrated mix of residential, retail, educational, health and wellness, employment, hospitality and cultural and arts-related uses.”

The District set aside 211 units of housing for senior citizens and veterans in Abrams Hall, which was originally constructed in 1976 as barrack housing for soldiers receiving long-term medical care. In addition to private developers and nonprofit organizations, this complex project involves six city agencies, according to an Oct. 16 press release: the Office of the Deputy Mayor for Planning and Economic Development, Department of Housing and Community Development, Housing Finance Agency, D.C. Housing Authority, Department of Human Services, and Interagency Council on Homelessness.

Philip Hecht, president of the D.C.-based nonprofit Housing Up, described three separate sections of the Abrams Hall rehab project his firm is helping develop: 14 North, 14 Middle, and 14 South. Connected via a courtyard, the three buildings at Abrams Hall will feature amenities such as a movie theater and lounge, a new gym, and plenty of common areas.

The 14 North building developed by Urban Atlantic and Housing Up consists of 54 assisted-living units that are scheduled to be ready by the end of 2021. Sheri Conde, the vice president of Edgewood Management, said her company will manage the day-to-day operations and taking applications for prospective tenants. Social activities designed to appeal to the seniors living there will include movie nights, holiday programs, and other events that “help bring the community together,” Conde said. 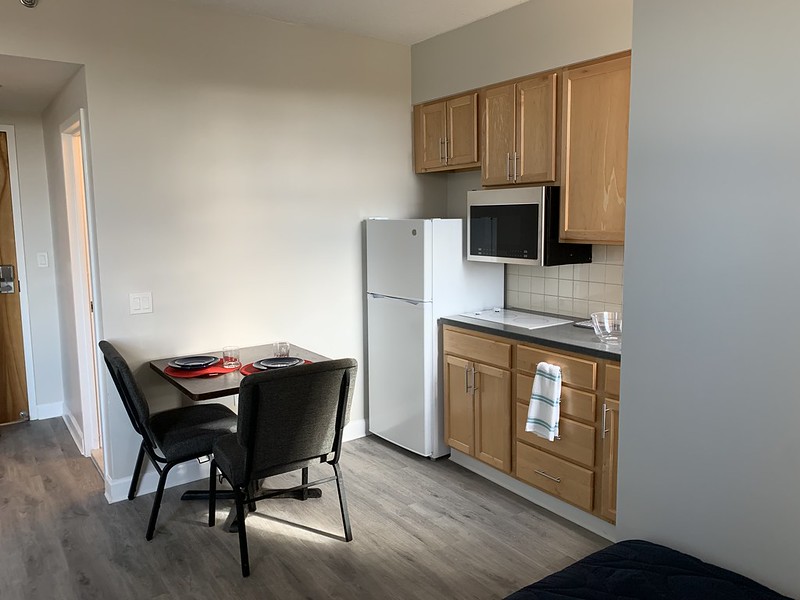 A typical kitchen and dining area within each unit of the 14 South. Photo by Bonnibelle Bishop.

The 14 Middle building, also being developed in partnership between Urban Atlantic and Housing Up, includes 80 affordable housing units for seniors as well as the offices and headquarters for Housing Up, which focuses on housing services and affordable housing development for homeless and low-income people. Housing Up’s ultimate goal, Hecht said, is to “ensure the housing stability of the tenant.”

Formerly known as the Transitional Housing Corp., the group will provide case management services for the tenants of 14 Middle, who should begin moving in before the end of the year or by early 2020.

The 14 South building will house 77 formerly homeless veterans. The bulk of the units will be efficiencies for people earning 30% or less of the Area Median Income, as calculated by HUD. Two of the units, also efficiencies, will be open to veterans earning as much as 50% of the AMI. For an individual living in the Washington area in 2019, 30% AMI is $25,500 and 50% AMI is $42,500. 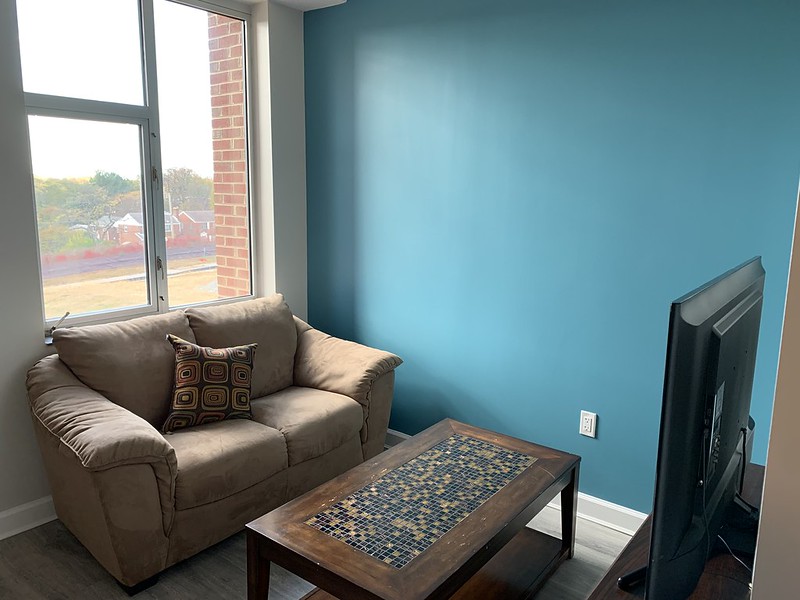 The standard living room within each unit of 14 South. Photo by Bonnibelle Bishop.

Each resident of 14 South will pay a rent amount that equates to 30% of their monthly income, according to Hecht. This number is commonly used by housing subsidy programs to determine how much a recipient must pay for their rent. Any household in the U.S. that pays more than 30% of their family’s income toward housing is considered “cost-burdened” by HUD.

Chapman Todd, who has worked for various homeless service providers in the District since 1990, is now the principal of the consulting firm Jaydot, which was hired to assist on the pre-development and operational phases of both the HELP USA veterans project and the Housing Up projects. Todd said review of Help USA’s application for a certificate of occupancy has taken longer than expected, stalling the move-in process. He said the development team is working hard to obtain approval from the D.C. Department of Consumer and Regulatory Affairs as quickly as possible.

While residents will soon move into the South and Middle buildings of Abrams Hall, planning for other aspects of The Parks at the Walter Reed community is ongoing. Construction is slated to continue for 10 to 15 years due to the project’s expansive scope. 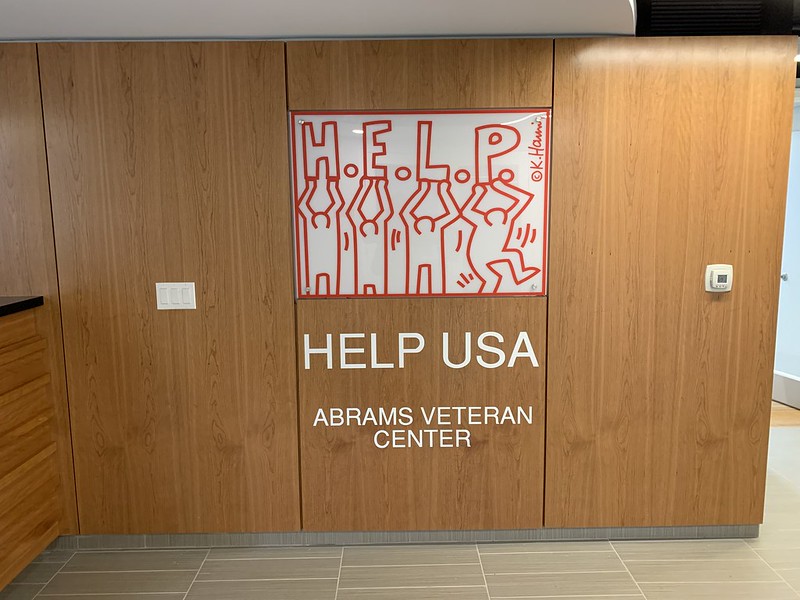 The lobby of 14 South. Photo by Bonnibelle Bishop.

A Jaydot spokesperson noted that Abrams Hall was rehabbed first to meet the urgent need for affordable housing in D.C., although it won’t provide the only such units in the project. Another 25 units of affordable housing set aside for extremely low-income seniors — those earning 30% or less of the Area Median Income — are being built elsewhere on the campus by the nonprofit So Others Might Eat. This project is in the pre-development stage.

According to the annual Point-in-Time count conducted in January 2019, 415 veterans were experiencing homelessness in D.C. at the time.  Since 2015, over 2,100 veterans in the District have exited the street or shelter to obtain permanent housing, resulting in a 27% reduction in homelessness among veterans, according to the mayor’s press release about the Oct. 16 ribbon-cutting for Abrams Hall.

For his part, Chad Jackson looks forward to moving into Abrams Hall, as he’s currently scheduled to do on Nov. 26 — two days before Thanksgiving. To apply, Jackson said, he had to provide a Social Security card, another legitimate form of identification, and a DD214 form certifying his discharge from active duty.