From one filmmaker to another: Franklin Garcia breaks down DC Statehood, TV production and community support

Last year, Street Sense Media Vendor Morgan Jones happened to meet D.C. Shadow Representative Franklin Garcia at a DCTV graduation ceremony. Both are members of the station and each was attending the ceremony to support a friend. Jones told Garcia about a show he is producing with the Street Sense Filmakers Co-op and Garcia, an award-winning producer, offered to share some tips. “The first [episode] is always the more challenging,” according to Garcia. “After you get the format down, then it’s a lot easier to do it recurring. With that first one, you have to get your lighting, get the stories, the editing part, all that.”

Garcia was flattered to learn that Jones had already seen one of his shows, “DC Statehood Today.” As part of the District’s nonvoting shadow delegation, Garcia’s job is to push the city’s agenda for achieving statehood forward in whichever way he and his colleagues deem most useful. Like Delegate Eleanor Holmes Norton, shadow senators and representatives cannot participate in votes on the House or Senate floor. Unlike Norton, they also cannot participate in committee votes. The delegation represents the people of D.C., a larger population than Wyoming or Vermont, but it is limited to influencing other members of Congress and the public through conversation, statements and other means.

When he ran for office in 2015, applying his media savvy to informing more people about the importance of statehood was part of Garcia’s platform. Several weeks after they met, Garcia agreed to an interview with Jones to discuss this in greater detail. 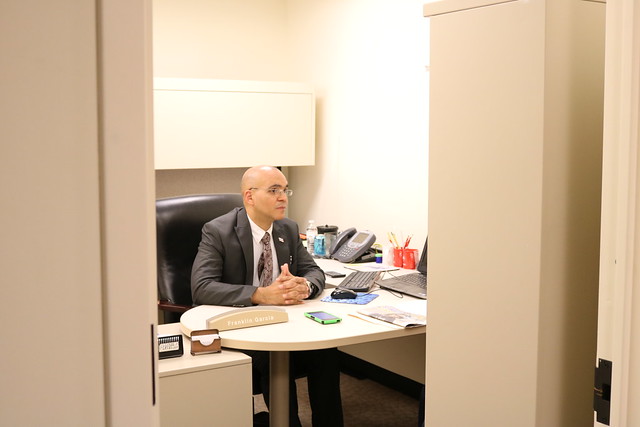 The D.C. shadow representatives and senator have offices in the lower level of the Wilson Building. Photo by Eric Falquero

Street Sense Media: What would change for the average District resident if we became a state?

Garcia: For [statehood] to really become interesting to D.C. folks, it has to become relevant to them. D.C. Statehood is not only about voting rights in Congress. If you looked at Venezuela right now, or Honduras — they’re in turmoil, right? You can see the difference of not having a true democracy. In D.C., you don’t have that issue. So we, in many ways, have to make it relevant to get people on board.

Our judiciary is, for the most part, nonexistent in D.C. Of course we don’t want anyone to be committing crimes, but should you be going into the system, don’t you want to have your own people taking care of you, instead of somewhere else in the federal web like Texas or Wyoming?

Another tragic example is the AIDS epidemic in the ’80s. D.C. had one of the worst rates of the whole country. We had a lot of people dying. So our legislators implemented a needle-exchange program. But Congress said, “You can’t do it,” so the program stopped, and it took a decade to get back to it. We found out later that we could have prevented so much infection from taking place if we kept that program. So, when you have legislature that is subject to intervention by people who have nothing to do with you and have no idea how you manage your affairs locally, that’s a big deal. We’ve seen it with the abortion issue, we’ve seen it with the gun laws, we’ve seen it with the marijuana issue. So, when you can see that the meddling in our affairs  by national legislature affects us in real ways, it will change people.

*All laws passed by the city must be sent to Congress for a 30-day review period before becoming law. A joint resolution may be enacted by both houses to disapprove any law. 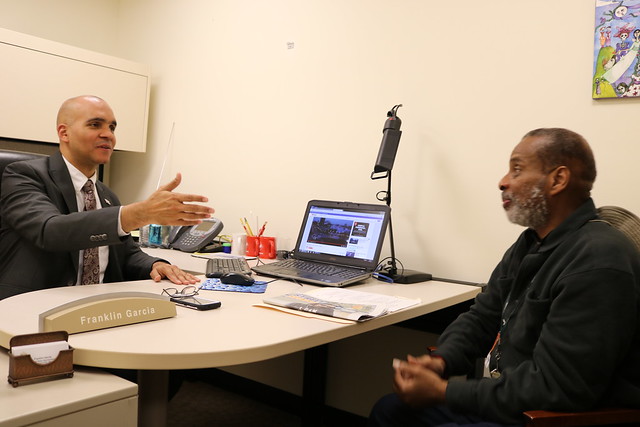 And [statehood] would mean getting senators so our citizens can get the correct allocation of funding and can have a voice nationally. It would be very beneficial to have our citizens know that they have a seat at the table when major events like the Cabinet appointments in the Senate take place.

Then there is our budget. We have budget autonomy, but we’re not sure how much of it we have. It’s not very clear.  The way we are treated in D.C. is as if we were a government agency. During the recent shutdown, the mayor had a public meeting to tell the people that the government will remain open, just like we did with the Obama shutdown. I think then-Mayor Gray was the first person to take a stab at saying, ‘No, we’re not going to shut down.’ And I think it worked out rather well. A lot of it had to do with the robust economy — the city has the rainy-day fund, about two billion dollars, so we were able to subsidize all these monies to maintain operation of local government.

We don’t have anybody at the table during those negotiations in Congress. Our delegate was there, but she has a very, very limited role; we all do. D.C. doesn’t really have anything when it comes to helping resolve a shutdown or determine how long it continues. But in terms of the leadership of our city, the mayor was there to say that we will continue operations as usual.

How do you fight for statehood?

Garcia: I’ve been working a lot to get the exposure and visibility for statehood, within an international scope. I had worked at the World Bank back in the day, and I have a lot of networks in the international community. I’ve met with the president of the Dominican Republic. I’ve worked with international organizations like the Unrepresented Nations People’s Organization. And I recently met with the Puerto Rico shadow congressional delegation. Their population is a lot larger, so they have five shadow representatives and two shadow senators. Puerto Rico elected the equivalent of our delegate, and it’s a Republican woman who used to be the chair of the Republican Party in Puerto Rico. She talked about the potential for D.C. and Puerto Rico to come together [so that votes from both parties would be added to Congress if statehood were granted to both districts]. The last time we did was 1959. I don’t know that we’ll be able to sell that to Congress. But right now we’re willing to do anything to further the statehood cause. 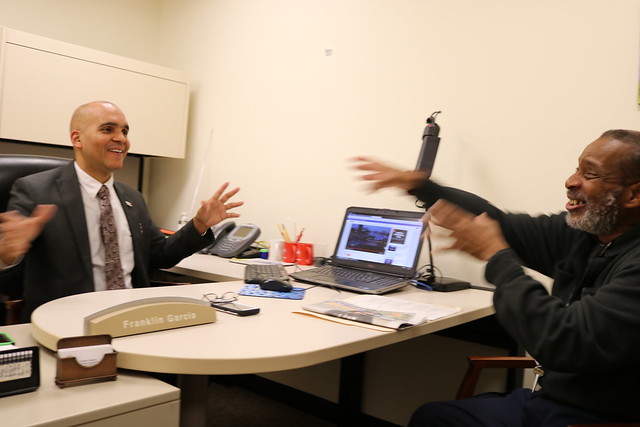 The only problem with D.C. is that it’s all Democrats. D.C. statehood is rejected by most Republicans. In fact,  the Republican Party platform, which was released over a year ago, it actually rejected statehood. And the local Republican Party tried, not to get statehood added, but to remove the language against it. And [the national party] wouldn’t do it.

I’ve also gone to many different states where I’ve been able to speak to universities and political groups. We need to bring the message outside of the city. We have created chapters in Nevada, Pennsylvania, Iowa and elsewhere that are very, very useful.

The other thing that I thought I could bring to the table is that I am good with technology, especially media. I started the D.C. Statehood television show through DCTV once a month. I’ve also been working within social media to reach more people in D.C. I’m constructing websites and using video, audio, photos to deliver the message. 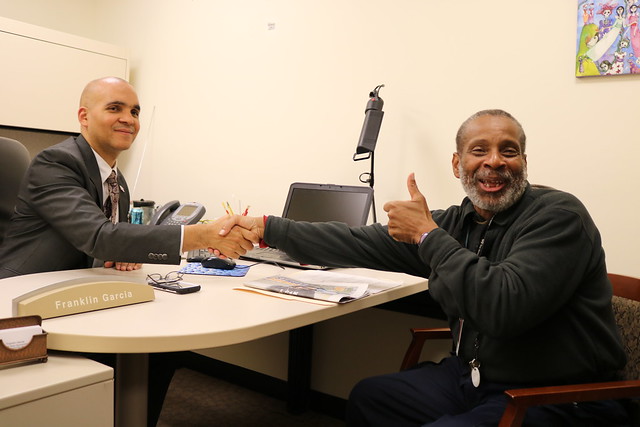 What are you most proud of accomplishing for D.C. residents?

Garcia: When I started on the job, I was very eager to meet members of Congress and get them to be co-sponsors of the statehood bill. And I actually got a lot of co-sponsors added to our statehood bill. I think that’s key, because at the end of the day, it’s up to Congress if we achieve statehood. You have to have a bill pass in both houses, and you do that by getting more co-sponsors. What happens is, the bill expires every two years, and you have to introduce a new bill. But once someone understands our plight for statehood and becomes a co-sponsor, it becomes very easy to go back and knock on their door when the next bill Is introduced.

What is your motivation behind the two shows you produce?

Garcia: The format of “D.C. Statehood Today” is very straightforward. Every time the show starts, we let people know how many co-sponsors we have in the House and in the Senate. And then it moves on to the summaries of where all has D.C. statehood been (meetings and media attention, etc). And then the culminating part is the interviews, folks talking about statehood. 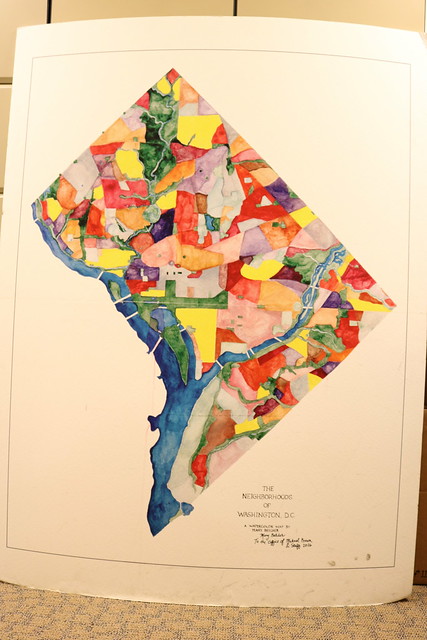 Garcia keeps a painted map of D.C. neighborhoods in his office. Photo by Eric Falquero

The “DCiReporter” I started when I was the head of communications for The D.C. Democratic State Committee. What I did then is I would get reporting from representatives of each of the eight wards that were members of our organization. And I would compile that reporting in a newsletter once a month. And basically, that newsletter became the show. “DCiReporter” talks about the sense of community. We have over 122 neighborhoods in the District of Columbia that are foreign to a lot of people who do not realize that this is not just the national capital. I  go to all different communities —  the LGBTQ community, the African American community, veterans, Latinos, immigrants — and I try to highlight that this is just a community like any other state has. It’s local reporting, so you can see a report on something like the Women’s March, a national event that took place in D.C., but you also can see Family Day in Ward 7, which is very very local. The idea was to pursue this notion that we are a very local community with lots of neighborhoods and very community-oriented things that people need to be exposed to.

Why do you do this work?

Do you have any personal experience with homelessness?

Garcia: Thank God, I have not gone through that personally. But certainly I’ve had enough friends exposed to difficulties in life and a couple of friends who have ended up on the streets for a short time. I work wherever I can to help ensure that we don’t forget that community. I used to be a board member of the United Planning Organization and one of the main things that we do is ensure that we look out for the homeless population and try to reduce the number of people that end up homeless. I’ve always been very committed to that cause. We have to just continue at it, because there’s so many different challenges. There’s so much need and so many other issues related to homelessness. Really, nobody should end up homeless in a nation like ours, with our level of wealth. It’s incomprehensible. Sometimes, I can’t image how not only as a city, but as a nation, how these things take place. 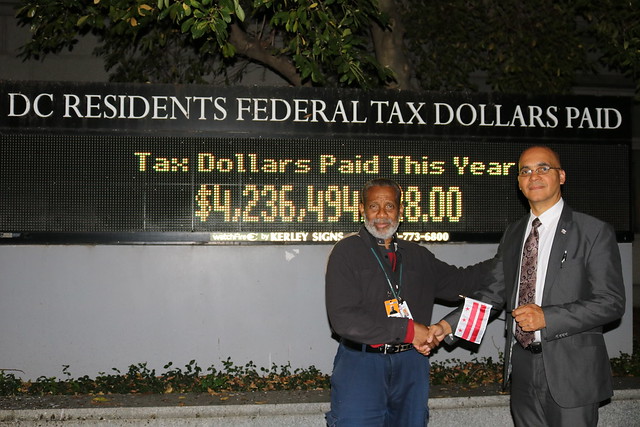 This interview has been edited and condensed for readability. Rep. Garcia was reached by phone to weigh-in on the recent shutdown of the federal government and his visit with the Puerto Rico shadow delegation.