On April 26, the D.C. Court of Appeals ruled in favor of a petition by the Barry Farm Tenants and Allies Association, moving that the court reexamine the D.C. Zoning Commission’s decision to approve redevelopment plans for Barry Farm.

The tenants association claimed that the Commission made “erroneous” conclusions about the redevelopment application, which provides for less public housing units at Barry Farm and fails to weigh the hardship of relocating residents, according to the court decision.

More than a month after the court’s conclusion that “the Commission did not fully address all contested issues as required by the zoning and redevelopment regulatory scheme,” the D.C. Council Committee on Housing and Neighborhood Revitalization announced a public roundtable to discuss the future of redevelopment at Barry Farm.

At-Large Council member Anita Bonds, who chairs the Committee on Housing and Neighborhood Revitalization, called the session to order on July 12.

She said that executive witnesses would likely not be able to fully answer questions regarding the future of redevelopment due to the court’s dismissal of the most-recent plan, and reminded residents they have until July 15 to express their interest in a housing voucher from the U.S. Department of Housing and Urban Development before they expire.

Bonds meant the D.C. Housing Authority (DCHA) will no longer have access to a government relocation subsidy for these voucher. Residents who accept a relocation voucher before July 15 have 60 days from when the expiration date to find a housing unit within the private market that accepts housing vouchers. Sept. 30 is the last day DCHA will have access to the funding for these vouchers.

Sitting beside her council colleagues and in front of a room packed with Barry Farm residents, Bonds swore in Director of the New Communities Initiative (NCI) Angie Rodgers and DCHA Executive Director Tyrone Garrett, who made an unexpected appearance following rumors earlier  he would not attend, as tweeted by Empower D.C., an advocacy organization working with the district’s low and moderate-income residents.

Since 2005, Barry Farm has been one of four distressed neighborhoods targeted for redevelopment and revitalization through the New Communities Initiative, including Park Morton, Lincoln Heights and Northwest One. D.C. Council approved the Barry Farm Redevelopment Plan in 2006 with the goal of “transforming the public housing development into a mixed-income, mixed-use community,” according the NCI website.

Since then the property has undergone over a decade’s worth of planning and work leading up to its demolition. This includes construction of 100 replacement public housing units at Sheridan Station and Matthews Memorial Terrace, both of which are approximately three-quarters of a mile from the Barry Farm neighborhood. Despite this, some Barry Farm residents have grown restless with the project and the lack of communication with DCHA.

Prior to the court’s decision regarding the zoning order, Chanda Washington, director of communications for the Office of the Deputy Mayor for Planning & Economic Development (DMPED), said Barry Farm was set to be NCI’s first development on a public housing footprint and was ahead of other neighborhoods undergoing revitalization.

The future of development at Barry Farm is predicated on when a new redevelopment plan that addresses the concerns of the court can be agreed upon. This is crucial to inform the final financial plan for the remaining cost of the project.

But with each step dependent on the last, the plan cannot be finalized until it meets the requirements set by the court. D.C. Council advised the planning organizations to discuss with tenants what they would like to see from redevelopment. While DCHA has been communicating about the project and holding planning sessions with tenants for years, Daniel del Pielago, organizing director for Empower D.C., said these discussions have not engaged residents on their needs aside from superficial details.

To date, the District has committed $25 million to Barry Farm through memorandums with DCHA. The remainder of this money will cover pre-development work and infrastructure — as well as kickstart demolition, Rodgers said. Members of the D.C. Council Committee on Housing and Neighborhood Revitalization posed questions to Director of the New Communities Initiative Angie Rodgers and D.C. Housing Authority Executive Director Tyrone Garrett for the last hour of the roundtable. Photo by Christian Zapata

The Court of Appeals order handed down in April required the zoning commission to “reconcile the dispute” between the guaranteed right to return for residents and the lower number of public housing units that were planned for the new mixed-income development. Among other points, the order also required the commission to “address the specific adverse impacts raised by Barry Farm residents and consider the loss of their current amenities as an adverse effect.”

While these items could slow finalization of the plan, demolition may still commence. Residents and councilmembers alike fear what might come of the property if a development plan is not finalized first.

“The housing authority…has not yet worked out a viable alternative that will pass legal muster,” said At-Large Councilmember Robert White Jr. “That raises the specter that the Barry Farm project could fail, like other New Communities projects have failed in the past, leaving parking lots where homes used to stand.”

When asked how far DCHA is willing to extend its relocation deadline to ensure all residents have found stable housing, Washington said the housing authority has not put a deadline on this and is willing to continue working with households to find suitable options.

Residents have been unsure as to the future of their housing security for over a decade, del Pielago said. Some are in the same boat they were when they first arrived at Barry Farm, moving from one demolished public housing unit into another that now faces demolition.

Poor maintenance of public housing owned by DCHA is a persistent issue across all of its properties, del Pielago said. He believes the housing authority delivers vague answers as to how these issues will be solved and failed to specify a timeline regarding future redevelopment at the roundtable.

In his opening statement, Garrett reinforced that tenants have the right to return to Barry Farm once the property is completed. He added that 90 families currently remain at Barry Farm: 41 currently have active housing vouchers while searching for a new home, six are awaiting a voucher; and 23 have specified they do not want a voucher. 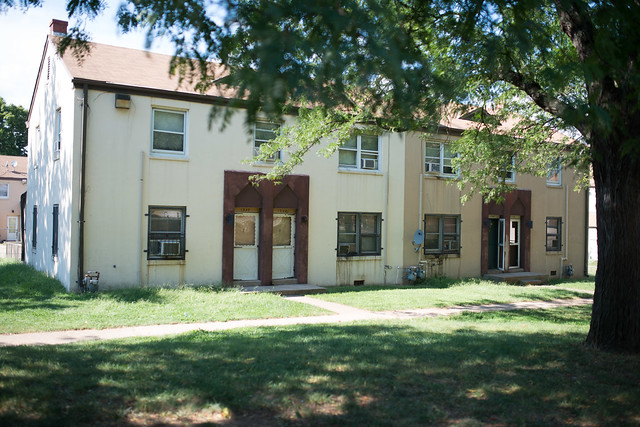 This leaves 20 families who, as of the roundtable on July 12, had not made a decision of whether they plan on accepting a voucher or not. Garrett said this group was the focus of an information session hosted by DCHA earlier that day.

He stated 13 families attended this meeting and determined they would accept a housing voucher — leaving only seven families undecided. He confirmed any families who have not committed to a housing voucher by the time of the program’s expiration will receive guaranteed public housing.

In an interview with Street Sense Media, a member of one of the seven undecided families said that choosing whether or not she wants to relocate is a decision she doesn’t want to make.

For her, the essence of Barry Farm is its community.

“I just live at Barry Farm, unfortunately,” she said of the physical place. “But recently, over the last couple of years, I’ve developed a relationship with the community.”

She is bent on fighting the redevelopment alongside her community. In addition to not wanting to leave, she was afraid the added costs of living on a housing voucher would be too much to handle. Equally daunting are the prospects of navigating a competitive housing market, not feeling at home and finding a trustworthy landlord.

Even though Barry Farm is not the modern, mixed-income community NCI intends it to be, there are sentimental qualities that its residents treasure: cross-generational occupancy, building a community for oneself and the small plots of grass around each housing unit are all special. In a mixed-income community, they fear this all disappears.

[Read more: Barry Farm residents say they, too, want development but need a voice in helping plan changes to neighborhood]

Despite DCHA policy that states residents as of 2012 retain the right to return, some tenants are afraid the amount of uncertainty surrounding this project, coupled with a decrease in the number of public housing units from the previous redevelopment plan, is cause for concern.  Rodgers, the NCI director, stated that as the development team works to finalize a redevelopment plan, relocation of the remaining 90 residents will continue along with abatement work scheduled for later this summer and about a year’s worth of demolition shortly after. Approximately 80 percent of the existing units are currently vacant.

She said the small area plan, an estimation of the number of housing units and an additional layer of affordable housing, will transfer to the first phase of development and is already funded by the District. This statement was followed by a collective scoff from residents sitting on the left side of the room.

She expressed the difficulty of budgeting roughly a decade in advance. She said not having a finalized funding plan is a reflection of the need to have a final development plan, not of a lack of commitment.

Bonds concluded the conversation with officials by asking that they submit bi-weekly reports on the status of redevelopment. The next meeting with residents of Barry Farm is scheduled for Aug. 1, according to a project manager at DMPED.

This article has been updated to reflect that D.C. Housing Authority is not the only partner involved in the Barry Farm redevelopment plan. The precision of some language used to refer to the project was also updated, including the addition of the detail that 100 units of replacement public housing have been built for Barry Farm residents at Sheridan Station and Matthews Memorial Terrace, both of which are approximately three-quarters of a mile away from the Barry Farm neighborhood.