Sporting an army green hat and camouflage jacket, the veteran stands in front of a crowd of about 50 volunteers and bows his head in prayer.

“Lord, help us today to find people in need that we can comfort and offer hope to,” Kurtz says. “Lead us to the people that can most use our help.”

He is part of a D.C.-based nonprofit organization called Veterans on the Rise that provides shelter, case management services and transition assistance for homeless veterans. Kurtz, who served in the Army, has been involved with veterans outreach efforts for more than 20 years.

And this Veterans Day at 8 a.m., VOTR teamed up with the Union Veterans Council of the AFL-CIO to dispatch volunteers to distribute care packages and information about more substantial resources to homeless veterans all over D.C. It’s the first time the group has organized the event.

“[We are] trying to reawaken those echoes of when we were a little stronger and had hopes for the future,” Kurtz said of the task ahead in talking to people on the street about how the organization can help them. “Trying to reinstill some hope.”

Many of the volunteers were themselves veterans.

“There’s a common bond between people who have served,” Kurtz said. “We felt this was an opportunity to appeal to that.”

Kurtz said he came up with the idea for the “Search and Rescue” outreach event while talking with alumni. Kurtz estimated that the volunteers encountered between 120 and 140 people experiencing homelessness on the street that morning–– with about 1 in 4 being veterans.

In total, they distributed over 300 personal care kits, Kurtz said.

“There’s always a Memorial Day ceremony, there’s always a Veterans Day ceremony … That’s all well and good,” Kurtz said. “But when there are veterans in need right before our eyes, what better way to honor veterans … it’s service rather than just symbolism.”

The crowd of volunteers – which included both veterans and civilians – split into groups of five to 10 people. Each group was assigned different parks, shelters or populated corners to visit in hopes of getting supplies and information to any homeless veterans they found. Peter Matlon, a board member of Veterans on the Rise, a D.C. nonprofit that provides housing and services to homeless veterans, partnered with the Union Veterans Council of the AFL-CIO for a “Search and Rescue” outreach event on Nov. 11, 2019. They visited street encampments and shelters on Veterans Day to deliver resource kits and information. Photo by Victoria Ebner

Peter Matlon, who sits on the board of Veterans on the Rise, said the event is essential because seeing veterans on the street is a disgrace.

“Many people are very uncomfortable being around homeless people, and they see them as a nuisance and an eyesore. And they’d rather ignore the problem,” Matlon said.

The groups deployed to 10 different encampments and 10 different shelters, spread out across D.C. The kits given out included toothbrushes, floss, gloves and hats, and the paper resources included information on housing resources and VOTR’s programs.

“It was a way to get something concrete into the hands of people that are sleeping rough and direct them towards services where their lives may be improved,” Matlon said.

Floyd Palmer, one of the Veterans Day outreach volunteers, said completing VOTR’s program made a world of difference in his life. Palmer served in their Air Force for several years.

“To go from homeless to being able to live there for six months – I turned my life around,” he said.

[Read more: Veterans on the Rise helped this man end 14 years of struggle]

Palmer said he volunteered because he felt it was important to give back to those who are currently in the situation he was in. He said many of them are just looking for a place to belong and he hopes to help them find that through Veterans on the Rise.

One volunteer, Sherilyn Wright, said she heard about the event through her union and immediately wanted to participate.

“[Veterans have] done so much for us, and we haven’t done what we need to help them and it’s wrong,” Wright said. “It’s just wrong.” 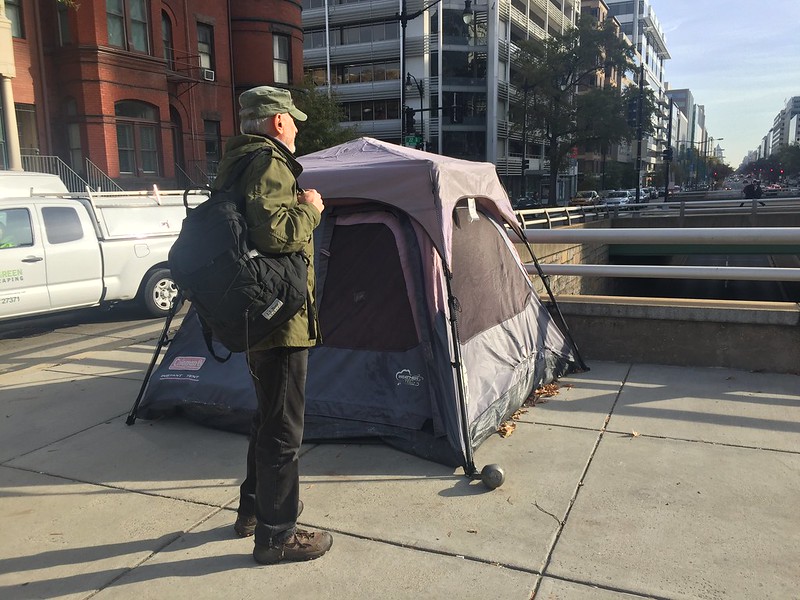 Peter Matlon approaches a tent in Foggy Bottom during Veterans on the Rise’s “search and rescue” outreach event. Photo by Victoria Ebner

Dan Helmer, a newly elected member of the Virginia House of Delegates, said his personal connection as an Army veteran led him to come out to the event.

“Continuing to serve our community means making sure we take care of those I served side-by-side with in places like Iraq and Afghanistan,” said Helmer, who is now in the Army Reserves.

As the only elected official present, Helmer said he hopes the veterans felt as though their needs were being considered and that there are people rooting for them.

“We’re [letting] folks know that we still care about them, that we want them to be successful and have opportunities, and that a country that they fought hard for still wants to make sure they have access to the services and dignity that they’ve earned,” Helmer continued.

Though both Kurtz and Matlon described the event as successful, they noted some possible changes for next year, such as having volunteers visit area soup kitchens. In the future, Matlon wants to be more strategic in finding out when and where communities of homeless veterans congregate.

Nevertheless, Kurtz said he is satisfied that the group made an impression on the veterans they encountered.

“We like to think we woke up some echoes of pride,” Kurtz said. “We know we touched a chord with a number of veterans out there.”