Cleanups conducted by the District government on Jan. 11 and 24 forced residents in several underpasses between First and 2nd Streets NE to vacate their encampments. The Jan. 24 cleanup on K Street NE was considered an immediate disposition of public property, which does not require prior notice.

The cleanup was announced the previous morning. Residents did not have enough notice to find a new location before the immediate disposition, according to Caitlin, who moved from the K Street NE underpass to 2nd Street NE, which is uncovered and vulnerable to wind and precipitation. “We had a day, not even 24 hours,” she said.

The sidewalk was not able to be used by pedestrians, especially people in wheelchairs, and therefore created a safety hazard, according to Sean Barry, communications director for the Office of the Deputy Mayor for Health and Human Services.

“We considered that a situation that rose to the level of requiring an immediate disposition,” Barry said.

It is illegal to live in a tent, vehicle or other “temporary abode” in the District of Columbia. However, a city protocol stipulates that residents be given two weeks’ notice before a standard disposition of property. 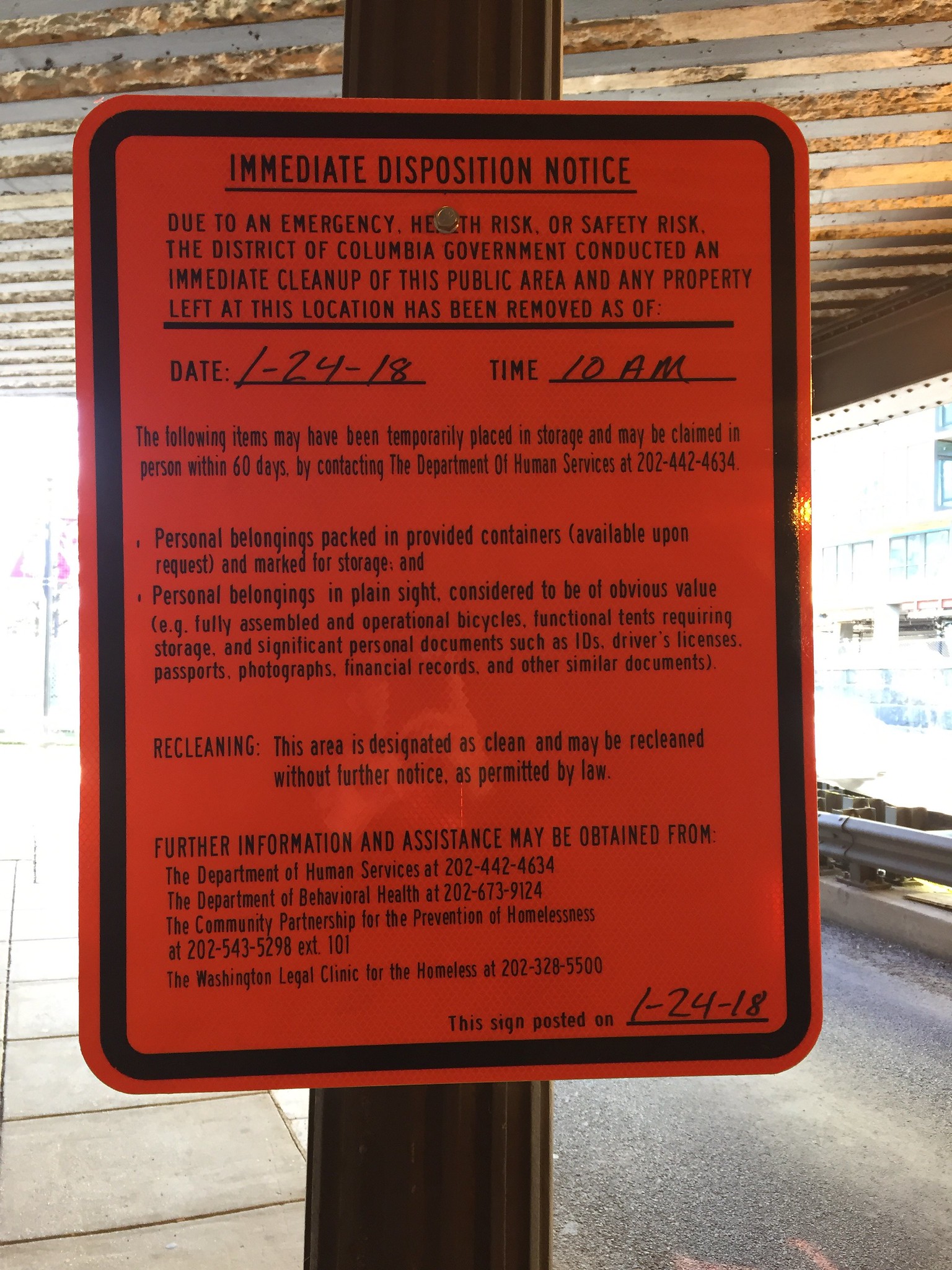 The people living under the M and L streets NE underpasses were given two weeks’ notice before cleanups occurred in both locations Jan 11. Many planned to return to the relative shelter of the underpass until fencing was put up in the underpasses.

This caused many people who used to live under the underpasses to crowd on to K Street NE, according to Barry.

Todd, a local man experiencing homelessness, agreed that the cleanups on M and L streets NE caused overcrowding on K Street NE. “I would have thought something would have happened because it was just too crazy,” he said. “You got tents on both sides from one corner to the next.”

Caitlin estimated that there were 15 tents on the south side of the underpass and five on the north side.

According to Todd, after the cleanup on K Street NE, most of the former residents scattered and could no longer be found.

The NoMa Parks Foundation, associated with the NoMa BID, placed the fencing as part of its ongoing construction of the Underpass Art Parks project, which aims to build light installations in the three underpasses, as well as the Florida Avenue NE underpass, at a cost of $2 million. “Rain” in the M Street NE underpass and “Lightweave” in the L Street NE underpass are LED displays.

“[The light installations] are to improve the conditions to make the underpasses more attractive and better lit,” said Robin-Eve Jasper, president of the NoMa BID. She added that the construction at M and L streets NE is expected to be completed in March, and then the fences will be removed.

The cleanups were partially in response to the construction. “We did change our schedule to do additional outreach because of the art-installation project that the NoMa BID was pursuing,” said Barry. “We wanted to make sure that, as fencing was going to be put up and that was going to essentially block the sidewalk, that the individuals experiencing homelessness were aware of that and were aware of the services that were available.”

The city provided outreach to the individuals in the area, which included offering access to shelters and transportation through the shelter hotline van, according to Barry. Some individuals experiencing homelessness in the area were doubtful of the shelters.

“The shelters are dirty, they’re stinking, they have a lot of thieves in there,” said Robert Johnson, a man who currently lives in a tent near where Caitlin moved to on 2nd Street NE. “Bed bugs are flooded up in there.”

Johnson opined that the NoMa neighborhood does not care about its homeless residents, instead prioritizing money and being “clean and business-minded.”

Caitlin was also skeptical about the light installations being built where she used to live.

“They’re probably just doing it because they didn’t want us there, so they had to think of something to put there or to do to keep us from coming back,” she said. 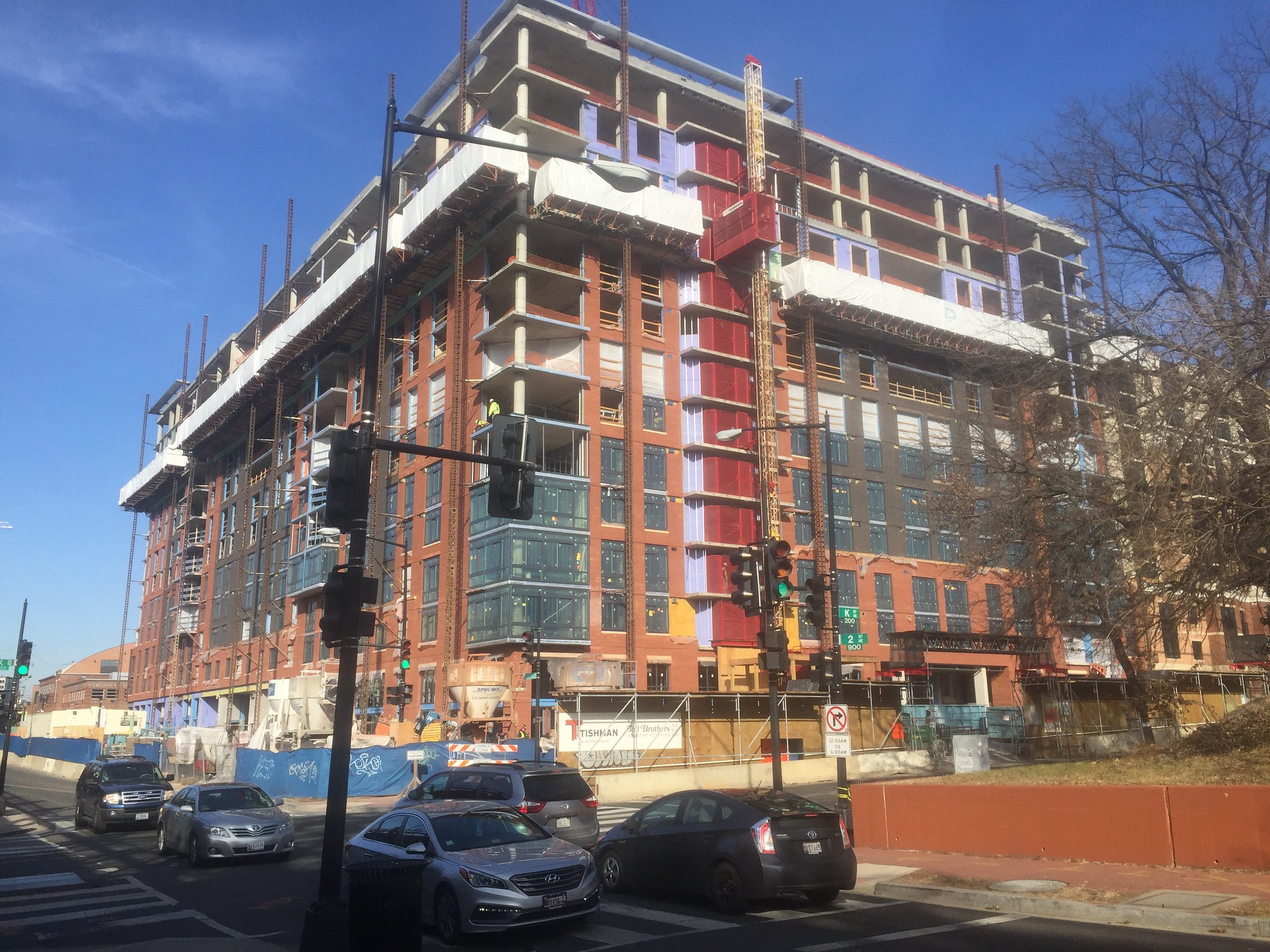 A construction site located across the street from the former encampments. Photo by Jake Maher.

Improvements to NoMa have been in the works since 2012, according to Jasper of the NoMa BID, and the designs for installations on M and L streets NE were chosen in 2014. “It involved outreach to community stakeholders in a variety of ways, and improvement to the connections between the east and west sides of the neighborhood was important to people,” she said. “Some of it was around safety, and people felt improvements in lighting were important.”

Jasper added that the homeless population in the area has grown since the planning began.

“There were not anything like the number of homeless people living under the underpasses as there are currently,” she said.

Barry said that cleanups such as the recent ones at M, L and K streets NE, as well as a previous cleanup on L Street NE in June 2015, are not a part of the District government’s long-term strategy on homelessness but rather an immediate response to unsafe conditions. “The encampment response really is driven by health and safety concerns, and the fact that you’re really not able to have a safe and healthy situation long-term by having tents on public property,” he said.

In NoMa, a neighborhood experiencing intense development and construction, Todd is pessimistic about the future of tent encampments.

“After [the neighborhood] is built up,” he said, “it’s not going to be none of that.”