Homeless people and their supporters crowded into pews at Luther Place Memorial Church on the evening of Dec. 21. “There are things in our democracy that we disagree on,” said Laura Zeilinger (?), director of the D.C. Department of Human Services. “But one thing we should agree on is that no one should have to live on our streets, and no one should die on our streets.” 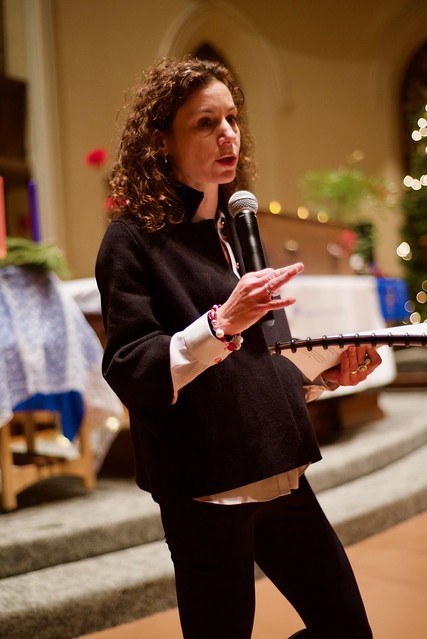 This was the fifth annual Homeless Memorial Vigil preceding a service to remember those who died while homeless in the previous year. The service itself has been held every year since 1990.

The two-day event, organized by the D.C.-based People for Fairness Coalition (PFC), began on the longest night of the year. The organization, founded in 2008 by homeless community members and their allies, advocates for services to end housing insecurity in the nation’s capital. Opening the evening’s remarks, PFC co-founder  Albert Townsend hailed the progress made in recent years toward ending homelessness (?), but reminded the crowd that there is much more work to be done.

The evening’s speakers shared a tone of weary resolve. “The struggle we’re dealing with, with homelessness, is a long struggle but we’re making progress,” said Ward 1 Councilmember Brianne Nadeau (?).

Patty Mullahy Fugere, executive director of the Washington Legal Clinic for the Homeless, provided context for the 45 people who died while homeless in the past year. “Last year we read 51 names,” she lamented (?). “In 2015 it was 41. In 2005 there were 34. How is it that in this nation’s capital, in this progressive city that has declared itself a human rights city — how is it that this can continue to happen?”

Fugere noted that the 45 deceased represent just 0.6 percent of the 7,473 people counted as homeless in the District and urged the audience to instead see “45 sons and daughters of 45 mothers … that allows us to see ourselves in these 45 community members.” Until D.C. residents stop seeing their homeless neighbors as “other,” these vigils will continue, Fugere warned. 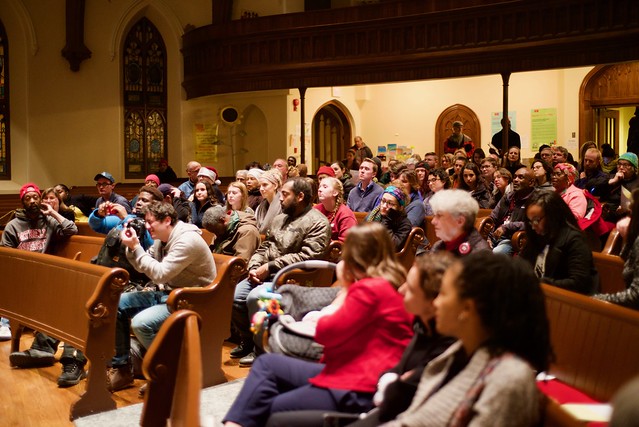 Dr. Catherine Crosland, director of Unity Health Care, teared up while discussing the importance of housing for her patients. “Housing provides a safe place to be protected from the elements and from random acts of violence,” she said, ”a place to store life-saving medication, and a sense of dignity and humanity.”

Dr. Catherine Crosland, director of Unity Health Care, teared up while discussing the importance of housing for her patients. “Housing provides a safe place to be protected from the elements and from random acts of violence,” she said, “a place to store life-saving medication, and a sense of dignity and humanity.”

The average life expectancy of unhoused people is between 20 and 30 years shorter than that of housed people, according to the National Health Care for the Homeless Council.

Yet, she cautioned, “after years of societal neglect, housing alone is not enough.”

Jesse Rabinowitz, an advocacy specialist at Miriam’s kitchen, implored the audience to acknowledge homelessness as a product of “racism and other systems of oppression.”

According to the U.S. Department of Housing and Urban Development’s most recent homeless population count, although Black Americans only constituted 47 percent of the District’s population in 2017, nearly 9 in 10 homeless people identified as Black. 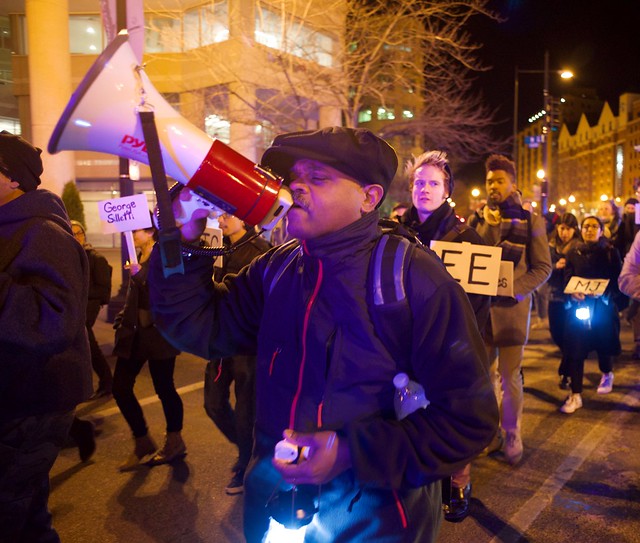 Albert Towsend of the People for Fairness Coalition yells into a bullhorn to lead a chant. Photo by Orion Donovan-Smith

After the speeches, with temperatures dropping near freezing, the crowd marched the mile from Luther Place to Freedom Plaza with a symbolic casket and signs bearing the names of the deceased. Gathered in a tent at the plaza, the marchers shared dinner and were invited to share their experience at a “community open mic.”

Ward 7 Councilmember and former mayor Vincent Gray attended and addressed the crowd. “There’s a lot of angry people out here, for good reason,” Gray told Street Sense Media. “We need to help people convert their anger into constructive action. It’s great to come out here one night, but people need to be a part of this every day.”

Many community members also took the mic to express hope and determination to end homelessness in the following year. Yet their resolve was worn by what they saw as a lack of progress despite repeated promises from local elected officials to better fund homelessness services and build affordable housing in the District. 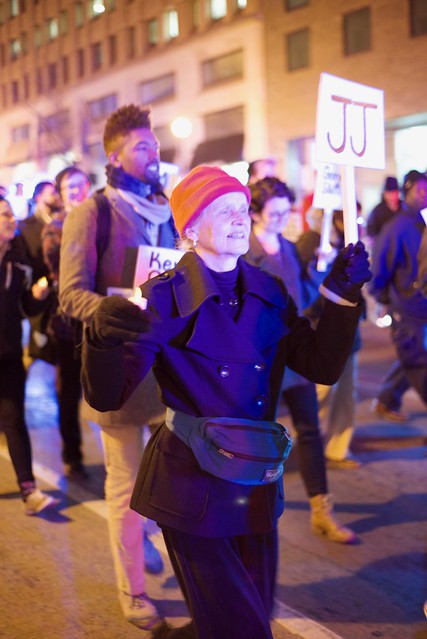 A marcher caries an electronic candle in one hand and a placard bearing the initials of someone who died while homeless or shortly after receiving housing in 2017. Photo by Orion Donovan-Smith

“This year I’m hoping we have a mayor that will actually fund her own plan,” said Robert Warren, a longtime anti-homelessness advocate and director of PFC.

When Mayor Muriel Bowser’s administration devised Homeward D.C. in 2015, it set several ambitious goals: ending veteran homelessness by 2015, ending chronic homelessness among individuals and families by the end of 2017, and rehousing recently-evicted families within an average of 60 days or less by 2020.

According to a D.C. Fiscal Policy Institute analysis, although D.C. Council approved the largest ever homelessness services budget for 2018, it “provides too little housing to end chronic homelessness, too little support to help homeless families and youth, and too little long-term affordable housing for homeless residents who need it.”

“The plan has yet to reach any of its goals, partially due to pushback from residents against plans to establish smaller-scale family shelters in Wards 3 and 5 and a much higher inflow of homeless veterans to the District than expected.

“We [PFC] have been doing this for the last 10 years under three mayors,” Warren said. “It comes down to political will. If we live in a ‘human rights city,’ at some point that has to mean something.”
Earlier in the evening, Rabinowitz estimated that it would cost less than 1 percent of the 2017 budget to build enough housing units to virtually end chronic homelessness in the District.

Along with skepticism toward elected officials’ annual pledges to end homelessness, several people who took the microphone challenged whether the D.C. Council was using the right tools to address the intertwined affordable housing and homelessness crises. 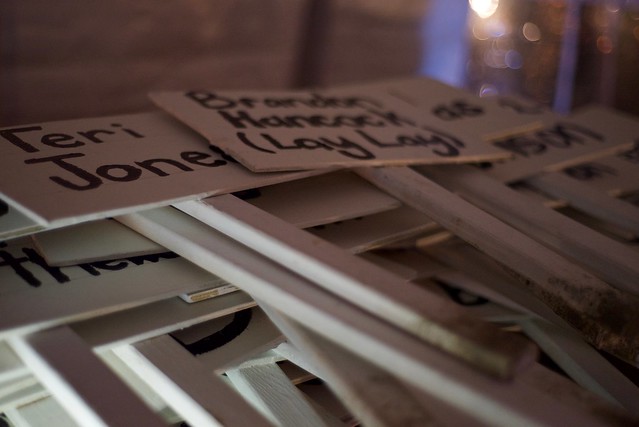 Placard bearing the names of people that died while homeless or shortly after receiving housing in 2017, stacked on a symbolic casket in a tent at Freedom Plaza. Photo by Orion Donovan-Smith

David Schwartzman, a former environmental scientist at Howard University and a Green Party D.C. Council candidate, told Street Sense Media that D.C. government’s affordable housing solutions were “insufficient” because they relied too heavily on the market.

“The free market does not help us at all,” said Reginald Black, a Street Sense Media writer and vendor. “We give them money to build more units. And they discriminate [against] us.”
Fellow PFC member John McDermott and Black both stressed that this was their fifth vigil memorializing people that were no different than themselves.

Yet in the face of the numerous barriers to ending homelessness, Luther Place Pastor Karen Brau urged “relentless hope.” As the night wore on and the crowd at Freedom Plaza thinned, the few who endured the frigid weather gathered together to sing Christmas carols and “Amazing Grace.” Of the more than 100 people who began the evening at Luther Place, just a dozen remained to spend the night on the plaza. 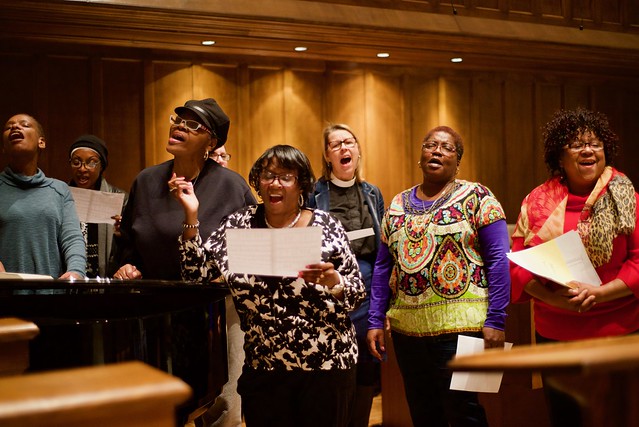