1976: Mitch Snyder and CCNV transform a vacant house in Columbia Heights into an emergency shelter.

1978: City officials take control of the Columbia Heights house and tear it down due to health code violations.

Thanksgiving Day, 1981: CCNV establishes “Reaganville” across from the White House, recalling the “Hoovervilles” of the Great Depression.

1982: The National Park Service issued a permit for CCNV to construct two symbolic tent cities in Lafayette Park and on the National Mall by denied the group’s request for authorization to sleep in the tents during the demonstration. CCNV sued the park service over the denial, alleging suppression of First Amendment rights.

January 1984: Members of CCNV begin to occupy the Federal City Shelter, but the government threatens to evict them after the winter is over.

June 1984: The Supreme Court rules in favor of the National Park Service, with the opinion that no exception to the ban camping and related activities, except in designated areas, should have been made to treat “overnight sleeping” as “expressive conduct” when the 1982 permit was issued.

November 4, 1984: Mitch Snyder ends a 51-day hunger strike the day before the election as Reagan agrees to CCNV’s demands for Federal funding of renovation for the 2nd and D St. shelter. 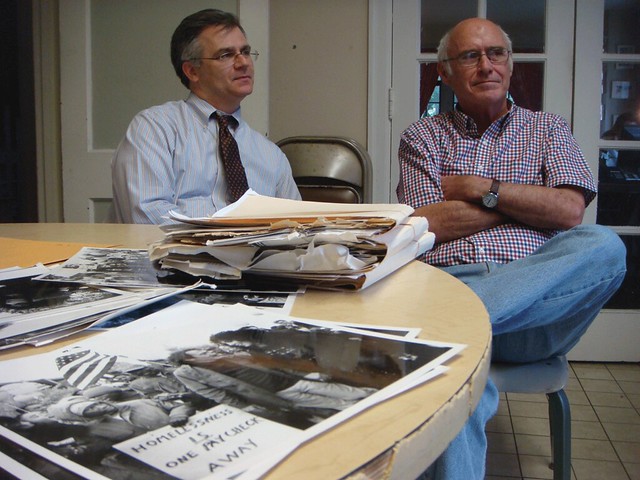 1988: PBS airs “Promises to Keep,” a documentary about Mitch Snyder and CCNV’s struggle for control of the Federal City Shelter.

Dec. 8, 2014: The Plan for Comprehensive Services for Homeless Individuals at 425 2nd Street, N.W., Act of 2014 is enrolled in the D.C. Register “to require the Mayor to develop a plan that provides a range of comprehensive services that address the assessed needs of homeless individuals at 425 2nd Street, N.W., and that complies with the Statement of Principles developed by the Center for Creative NonViolence Task Force.”

2016: The covenant between CCNV and the federal government over the use of the Federal City Shelter will end, after 30 years.

2021: The District is officially allowed to sell the parking lots behind the property on 2nd and D Street (also the property of CCNV).

Jan. 8, 2021: CCNV sues the U.S. Department of Health and Human Services and the General Services Administration for breach of contract.

This post has been updated to include a lawsuit filed by CCNV and details about the task force convened to determine principles for future use of the property in 2013 and 2014.