Randolph Nelson lives in a tent on L Street NE in the area now known as NoMa. On Tuesday morning, he rushed to move his belongings out of the way as a garbage truck drove down the street — part of a cleanup coordinated by the Office of the Deputy Mayor for Health and Human Services.

He has had his clothes, bikes, tents and other belongings thrown away during encampment cleanups in the last few months.

“I’ve replaced all my things four times, because of the D.C. government taking my things,” Nelson said. This usually occurs when he is at work or simply away from his tent during a cleanup.

Nelson’s younger brother, Sahw, who lives in a tent next to him, said he has had a portable heater and two bikes taken away during cleanups in the last few months.

DMHHS reserves two mornings each week for any scheduled cleanups across D.C. but visits individual homeless encampments no more than every other week, according to its protocol. The efforts involved range from only clearing trash to completely vacating and power-washing an encampment area. The agency’s modified protocol for COVID-19 says they convert scheduled “full cleanup engagements” to “trash-only engagements” as much as possible. When this occurs,  only “obvious trash and items that residents identify as trash or abandoned” are removed.

[Read More: Recovering from the trauma of an encampment cleanup]

The cleanup at L and M St. NE on Tuesday was expected to be a “partial trash/partial full-encampment engagement,” according to the DMHHS website. However, the city activated the hypothermia alert an hour before they began, prompting officials to switch it to a trash-only cleanup. 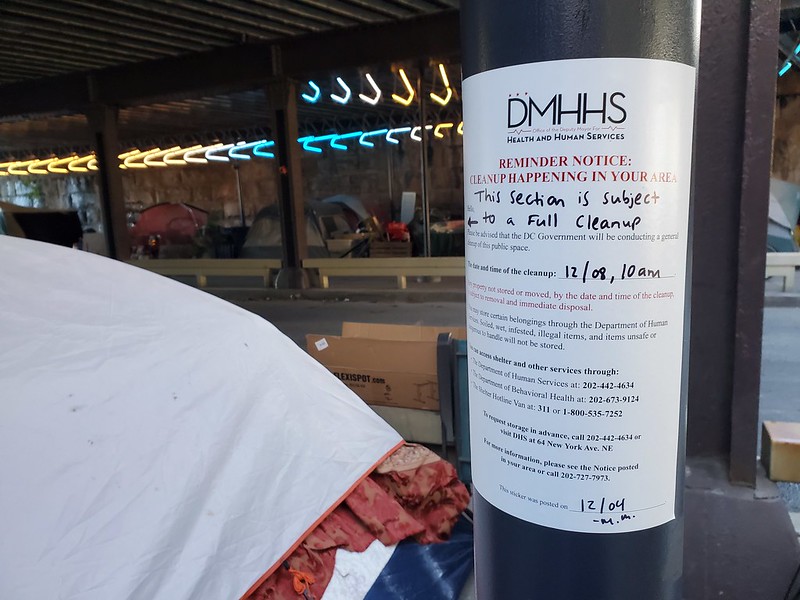 A DMHHS adhesive sign stuck to a pole on L St. NE, said a full clean-up was scheduled for Dec. 8. It was posted on Dec. 4, although DMHHS officials say they had informed the community a month in advance. Photo by Athiyah Azeem

Since March, the CDC has advised against full cleanups because displacement could both spread COVID-19 if a person is positive and disrupt a person’s connections with service providers. While DC was able to ease some COVID restrictions during the summer, cases have been soaring in the region since the start of November. There were 392 new positive cases on Dec. 5, the highest number the city has experienced in one day throughout the health crisis.

The words “full cleanup” were used in sticker notices to describe the intended type of engagement on Tuesday. If the hypothermia alert had not been activated, and DMHHS carried out a full cleanup that day, they would be acting against CDC guidelines.

“Even something that doesn’t turn out to be a full engagement is causing a public health risk,” said Miranda Rosenfelt, who was helping residents move their belongings.

She noted that there used to be a full tent space between each tent, but now everything was packed closer together and against the wall to make space for the sidewalk. “This is no longer socially distanced. It was.”

Rosenfelt and other advocates present said DMHHS officials told them the main concern for Tuesday’s cleanup was removing shards and needles.

Workers at the cleanup referred questions to DMHHS’s office. DMHHS did not answer any of Street Sense Media’s questions by the time of publication. 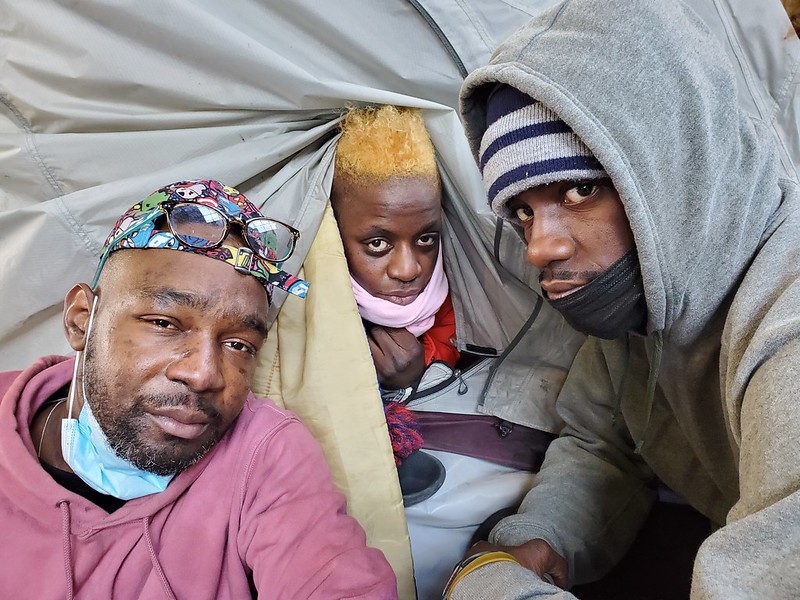 Randolph Nelson, his wife Antoinette Jenkins and his younger brother Sahw at their tent on L St., Dec. 8. Photo by Athiyah Azeem

Nelson and Sahw believe limited cleanups are needed to prevent mass accumulation of trash in the area. But they still find having to move all their belongings and negotiating with D.C. officials a “hassle.”

“I wish I wouldn’t have to go through all of this, but it should be done,” Nelson said.

More than 30 advocates and volunteers from the Good Trouble Cooperative and the Total Liberation Collective arrived early to engage with the community and help residents move their belongings aside before the cleanup began. They distributed blankets, toiletries, feminine hygiene products and masks.

They continued to help Nelson and other residents move their belongings as D.C. Public Works garbage trucks arrived to clean the area, and advised officials on behalf of residents on what can be trashed, and what are belongings that should be left alone.

Advocates from @GoodTroubleCoop and @tlcollectivedc are helping residents clear up their belongings before D.C. Public Works does. pic.twitter.com/A68oekOegB

Volunteer Ari Gutman said acting as middle-men between residents and officials helps keep a balance between fulfilling DMHHS cleanup priorities and making sure that residents do not lose valued belongings.

“I don’t think that when [DMHHS] is raiding these encampments, that they’re asking for permission to touch these things,” Gutman said. “If we come early, we can operate under consent, so it doesn’t escalate the situation.”

While several volunteers expressed satisfaction in helping mitigate the situation, they said the cleanup was still unnecessarily disruptive to residents.

“People don’t choose to live like this,” said Beyonce, an organizer for Good Trouble Cooperative. “You don’t get to remove the things that they do have so you can have, a ‘prettier street.’”

[Read more: One block over, tents were permanently banned form the K Street underpass in January to create a ‘pedestrian passageway’]

“This is all my stuff,” Nelson said, pointing to an array of his bikes, chairs, tents and other belongings now pushed against the wall. Before the cleanup, he had his furniture set-up to resemble a living room. “I’m trying to live the best I can, like I’m in a home, even though I’m not in a home.”

Rosenfelt said D.C. officials told the volunteers they would be rescheduling the full-encampment engagement for Dec. 17.

“They said in order for there to not be a full engagement on Dec. 17, we could help clear the place up by Dec. 13, 14,” Rosenfelt said. “I just find that ridiculous.”