This woman is leading a charge to aid King Greenleaf residents

When Taylar Nuevelle went to the women’s emergency shelter at King Greenleaf Recreation Center on April 7 to drop off a cellphone for a client, what she saw was “heartbreaking.”

Some of the women at the Southwest D.C. shelter had dirty or torn clothing. Others had no shoes. Hand sanitizer and masks were few and far between despite the ongoing spread of the coronavirus. So Nuevelle promised the women that she would come back with items.

She posted in the D.C. Mutual Aid Network Facebook group — which has more than 2,500 members and a goal of “[taking] care of each other and [keeping the] city as safe as possible” — detailing what she saw and listing needed items. She received dozens of emails and comments on the post from people looking to help and donate.

And in her visits to the shelter on the following days, she was able to deliver items that the women were in desperate need of.

“I was back [the next day], and as soon as I got there, they saw the boxes and they were very, very excited,” said Nuevelle, who founded the nonprofit Who Speaks For Me? in 2010. 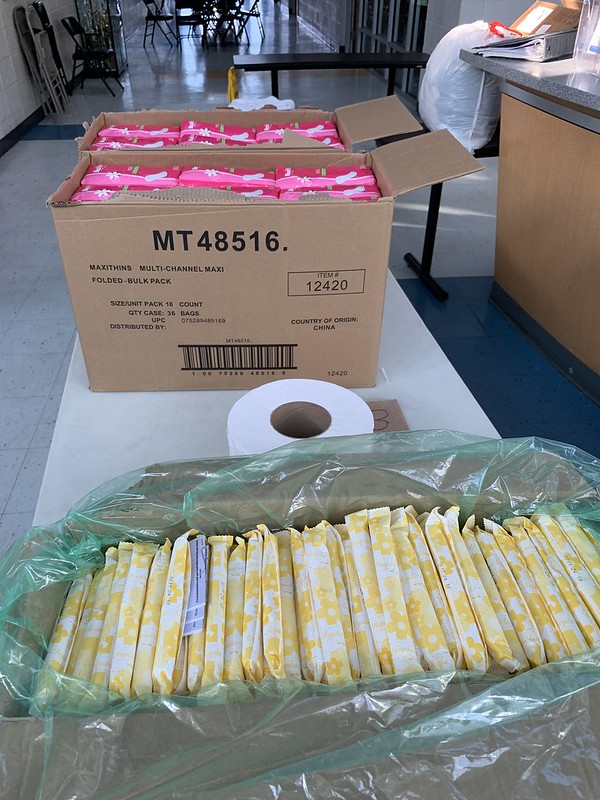 Hygiene products ready to be distributed to the women at the shelter. Photo courtesy of Taylar Nuevelle

She brought essentials such as bras, women’s hygiene products, bars of soap, towels, and clothes. Still, women at King Greenleaf were struggling. After Nuevelle finished handing out items and clothing on April 9, one woman — wearing a sweatshirt that was too small, sweatpants that were too big, and no underwear — walked up to her and asked if she could have a change of clothes.

By Friday, though, Nuevelle said she had received enough clothing donations to open a thrift store if she wanted.

[Read more: DC neighbors step up to help each other as coronavirus-related closures and anxiety increase]

Problems with the shelter’s operations persisted. Conditions hadn’t improved in the days following Nuevelle’s initial visit, she said. Social distancing practices weren’t being enforced, and cots were close enough that women could reach and touch each other.

Supplies are being delivered to King Greenleaf two to three times per week and paper masks are being provided while waiting on an order for cloth masks, according to D.C.’s Department of Human Services.

“I don’t want that shelter shut down because I don’t want people to be on the street,” Nuevelle said. “But I think that we have plenty of buildings that could be used in the city right now so that we can move some of those women into other locations so that they can actually practice safe distancing.”

[Read more: A text-alert service for DC’s homeless community is tracking which services are still open during the COVID-19 outbreak]

The King Greenleaf Recreation Center is used as a hypothermia shelter from November through March, but the Department of Human Services opted to keep it open as a low-barrier shelter — along with the Malcolm X Recreation Center — during the public health crisis. All recreation centers in the city are closed for their traditional purposes until further notice. DHS  has reported that 62 individuals in D.C. shelters have tested positive for COVID-19 as of April 13 and a spokesperson from the mayor’s press office confirmed on April 14 that at least one homeless person has died from the disease.

DHS said it’s focused on making sure that people who display symptoms of COVID-19 are pulled out of congregate shelter settings and then connected to isolation sites. There were 225 homeless people at those sites as of April 13.

[Read more: One of the hotels cooperating with DHS is set aside to help exceptionally vulnerable homeless people proactively self-isolate]

Nuevelle said 58 women were at King Greenleaf on Wednesday and 62 were there on Saturday. The shelter’s capacity is currently being capped at 85 with plans to de-densify in the future, according to DHS.

Audits are also being conducted at every shelter site, according to DHS. The department acknowledged it is not surprising that concerns Nuevelle witnessed are occurring amid the challenge of getting people to follow the guidance it has provided.

Catholic Charities D.C. is contracted to run the emergency shelter at King Greenleaf Recreation Center and manages most of the city’s year-round low-barrier shelters. The nonprofit was contacted for this story but did not provide comment on Nuevelle’s concerns.

As DHS continues to adapt during the evolving situation, Nuevelle said she plans to keep visiting King Greenleaf to ensure that the women are getting what they need.

“It makes me a little sad that it’s so little we’re giving them, but it means the world to them,” she said. “When the world has become so compact that a pair of socks can make you light up, you really get it.”

On April 20, Nuevelle posted the following in the D.C. Mutual Aid Facebook group:

“Former Resident of Green Leaf Speaks Out! One of the women we’ve been helping wanted people to hear from her directly about conditions at the Green Leaf shelter and how much better she is doing since we made calls and got her moved to a hotel for homeless families. I did a quick interview with her yesterday and she asked me to share this on social media. I’ll be posting on Instagram and tagging her per her request. Here name is Ikea (pronounced Ah-Ky-Ya). She is 25 years old and pregnant. She has no family as she was raised in foster care. Please watch.”

Former Resident of Green Leaf Speaks Out!One of the women we’ve been helping wanted people to hear from her directly about conditions at the Green Leaf shelter and how much better she is doing since we made calls and got her moved to a hotel for homeless families. I did a quick interview with her yesterday and she asked me to share this on social media. I’ll be posting on Instagram and tagging her per her request.Here name is Ikea (pronounced Ah-Ky-Ya). She is 25 years old and pregnant. She has no family as she was raised in foster care. Please watch.