One percent of the D.C. budget is more than enough to end chronic homelessness, marchers say

More than 100 activists had gathered by 8:30 a.m. for the “March to Make Chronic Homelessness History.” Some had woken up in their own homes; others had slept in shelters or outdoors. It was a brisk morning, with wind gusts predicted to reach as high as 21 miles per hour. Volunteers for the Way Home Campaign signed in participants for a rally at New York Avenue Presbyterian Church and welcomed them to grab hot breakfast and coffee, including some for the road.

The campaign, which is sponsored by the nonprofit Miriam’s Kitchen and lists 96 partner organizations and businesses on its website, had identified several homeless and formerly homeless individuals to share their experiences and motivate the crowd to call on city leaders for large investments to end chronic homelessness.

The city and federal government define someone as chronically homeless if they have a physical or mental disability, are sleeping outside or in a shelter, and have either been consistently homeless for more than one year or repeatedly homeless at least four times within three years. This applies to families if the head of household fits the same description. In 2015, the Bowser administration put forth an ambitious five-year strategic plan to end homelessness, which included a goal to end chronic homelessness by the end of 2017. The plan anticipated that, as of this year, anyone who had been chronically homeless would be housed and everyone newly homeless would receive assistance before homelessness became a chronic episode.

According to the 2017 homeless census, D.C. has seen the greatest reduction of chronically homeless single adults in the region between 2013 and 2017, a decrease of 294 people over four years. However, 1,470 individuals (excluding families) remained chronically homeless at the time of that count. The plan’s strategies are working, but the resources behind it have not scaled to meet the need. 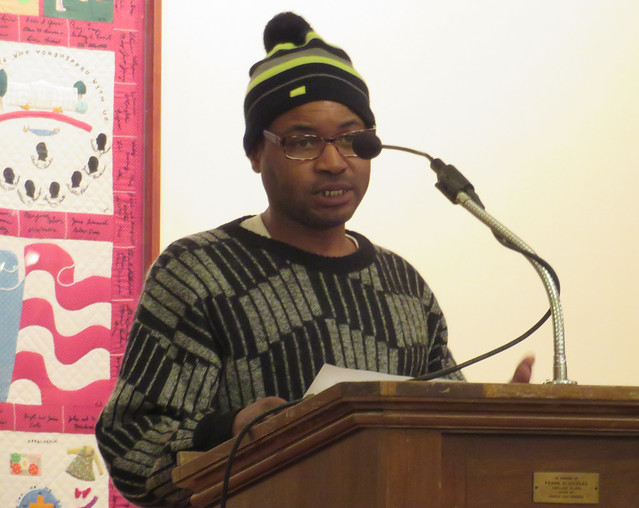 “Homelessness doesn’t just affect your physical body. It affects you mentally and emotionally,” Qaadir El-Amin said to the crowd. He described having a job most of the time but never having a high enough income to afford a place of his own. “I became very uncomfortable around people and in social situations. Having social skills is important in a work environment. Without them, I had trouble finding a job. It was painful. You see, everything is connected — fair-paying jobs, affordable housing, mental and physical health care and education. Without one, the others suffer.”

Each speaker at the March 8 event urged attendees to demand investment in permanent supportive housing, a voucher that never expires and includes “wrap-around” services tailored to support each recipient’s individual needs, such as case management, health care or career counseling. This is the most expensive “housing intervention” around. Yet, for people who have suffered homelessness chronically, it has proved time and again to be more cost-effective than leaving a person on the street, where they must rely on emergency rooms, shelters and other services. 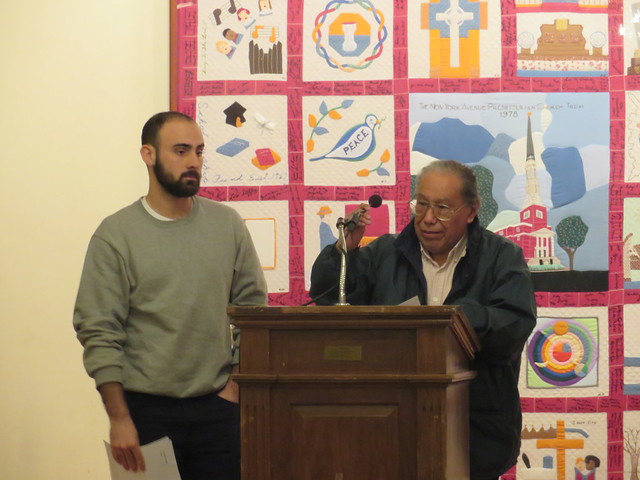 George (right) of the People for Fairness Coalition shared his experience with homelessness in D.C. at the rally in New York Avenue Presbyterian Church. He read most of his remarks in Spanish and allowed them to be repeated in English by a translator. George also led a bilingual call and response chant: “¿Que es lo que queremos? ¡Casas!” “What do we want? Houses!” Photo by Ken Martin

The Way Home Campaign also called for investment in the rapid re-housing program, a time-limited voucher with fewer services attached to it, for people that can thrive with less assistance. In total, the campaign calculated  $50 million dollars — or one half of one percent of the city’s $14 billion budget — would be enough to honor this benchmark in the mayor’s plan to make all homelessness “rare, brief and non-recurring” in the District.

One of the speakers, Miss Eaton, described becoming homeless after suffering permanent neck and back injuries in a car wreck. She was separated from her children over a three-month period, spanning the Christmas holiday, while they waited for placement in the city’s former family shelter, D.C. Village. They eventually received cots in an overflow room. The stress and stigma led to difficulty in school. The family’s case manager was overwhelmed with too many clients and could not move them past shelter. Eaton became connected to Permanent Supportive Housing by “trial and error,” working independently to learn about and connect with other service providers and other mothers in the shelter. 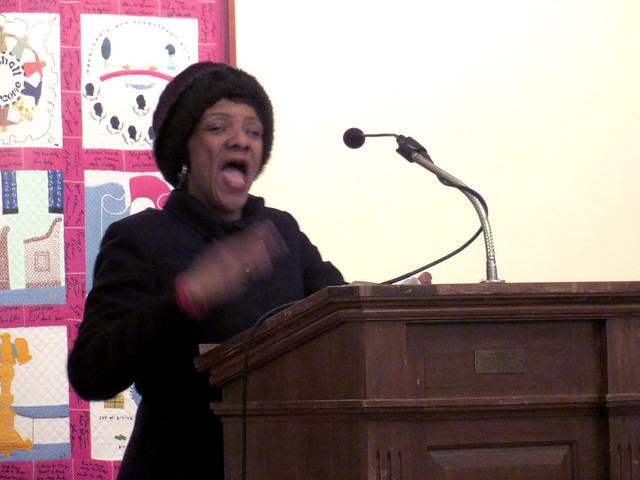 “There’s not enough support, so you feel lost, ” Eaton said. She described going through other housing programs before having a mental breakdown. Her voice wavered at the memory and she pressed on through tears. “I’ve worked since I was about 16 years old. Paid my taxes. Still couldn’t get housing.”

Eaton has been housed for 13 years and said she has been working as an advocate with Capitol Hill Group Ministry to “pay it forward” for people experiencing homelessness. From her perspective, the level of care and assistance provided for the city’s poor has not changed much since she was lost and alone all those years ago.

“With all of the money in D.C., I don’t want to see another person homeless,” she said, which was met with applause. “I’ve pledged to assist those in need of any and every way I possibly can. What about you?”

The demonstration was strategically scheduled during what many advocates refer to as “budget season,” when D.C. Council assesses the performance of city agencies and revises the mayor’s proposed budget for the next fiscal year, before sending it back to the mayor for final approval.

By the end of the rally, as some attendees left to get to work on time, the crowd had swelled to nearly 200 participants. Printed outlines of human figures on colored paper were given to marchers as a representation of the individuals Miriam’s Kitchen estimates are in need of Permanent Supportive Housing and Rapid Re-Housing. 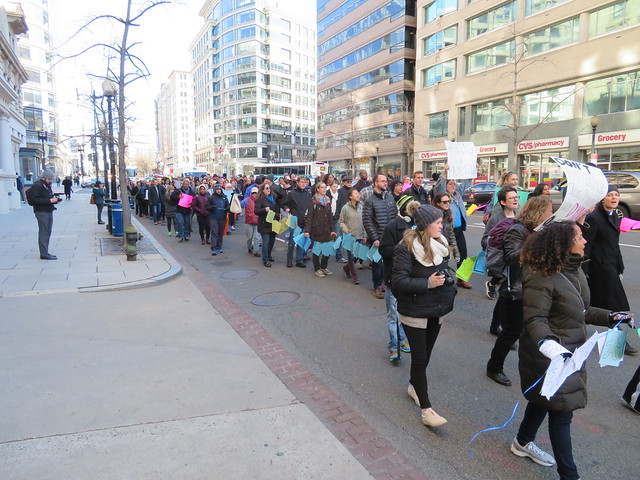 Then the crowd was led in a series of chants as they trekked down 14th Street NW, blocking traffic with the help of MPD, to visit the offices of Mayor Bowser and Council Chairman Phil Mendelson.

“We are here today because the next 13 days are critical for showing the mayor that D.C. residents care about housing our homeless residents,” said Jesse Rabinowitz, an advocacy specialist with Miriam’s Kitchen, to kick off the march. “If we’re committed to addressing racial inequity in our city, if we’re committed to ending homelessness, then we need bold leadership and robust funding to get D.C. back on track.”

When they arrived at the Wilson Building, another group of demonstrators was present, chalking statistics on the sidewalk about how many homeless women experience sexual assault, domestic violence and other trauma, citing a recent report from the D.C. Interagency Council on Homelessness.

One more native Washingtonian who had survived years on the streets spoke to the crowd before they filed through security and into the Wilson Building. 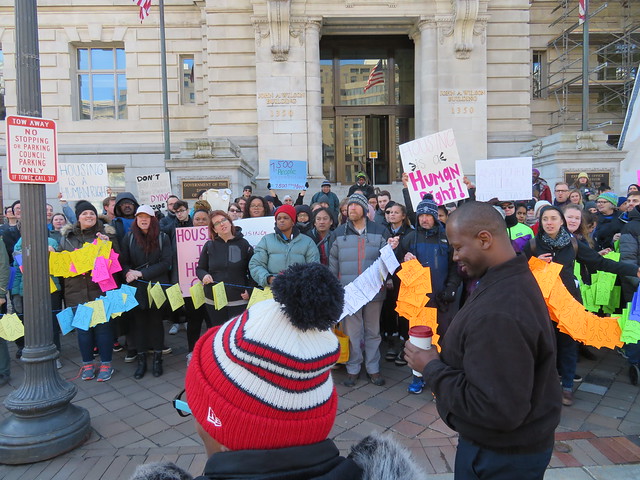 Anthony Hunter, holding a coffee cup from the morning rally, talks about the time he spent on the street. Photo by Ken Martin

“We only have to stand here for a few minutes,” Anthony Hunter said, commenting on the cold weather. “They have to live here. If we do not do this, we will lose lives. People’s mental stability will change rapidly, I know. Those with homes have comfort, you can wake up ready to conquer the world. On the street, you get depressed, anxious.”

Neither Bowser nor Mendelson met with the group, but staff members from each office thanked them for their input and accepted the 1,620 paper people symbolizing their chronically homeless constituents.

Sydney Acuff, one of the only marchers under 18, skipped an AP Government class to take part in the civic engagement. Noting the irony, she said she was not thrilled Mayor Bowser would not meet with the group. But she was not discouraged, describing the demonstration as a well-organized campaign and a beautiful sight to see so many people come together for one common goal.

Representatives from Mayor Bowser’s office (left) and Chairman Mendelson’s office (above) speak with the demonstrators. Photos by Ken Martin

“We cannot advance as a society or as a community if people’s basic needs aren’t being met,” Acuff said in an interview. “And I think young people play a really huge role in that. Obviously, as we’ve seen with the March for Our Lives movement and all of that, young people can have a really big impact.”

Her mother works for Pathways to Housing and she has interned with the Street Sense Media inter-generational theater program.

That morning, Acuff marched next to Angela Curry, who had driven more than 140 miles from western Maryland to support the same call to action. Though she left the District after she retired from the State Department in 2015, Curry remains connected to the city. She and her husband have been helping a man experiencing homelessness in D.C. pursue housing since October, and the process taught them just how complex poverty can be. Curry joined the Way Home Campaign to also support strategic, big-picture solutions.

“It’s so much more than someone losing their housing. It’s a legal issue, a medical issue. I’m looking for how to help fill in the gaps,” Curry said in an interview. She also worked for the U.S. Air Force and the National Security Agency. “All my life I’ve served, whether in the uniform or for the government. This is just a continuation. There are enough [retired] people like me, what are you doing with your time?” 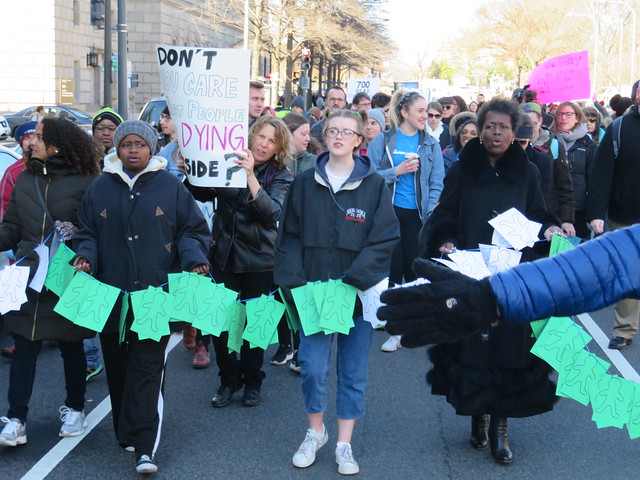 Sydney Acuff (center) and Angela Curry (right) participate in the March to End Chronic Homelessness and help to carry paper people symbolizing the many people in need of housing. Photo by Ken Martin

Two weeks later, the mayor’s budget proposal was released. It included millions of dollars for affordable housing and homeless services, but met less than half of the investments recommended by the Way Home Campaign for ending chronic homelessness.

Several marchers stayed behind at the Wilson Building for an oversight hearing focused on the performance of the Department of Human Services that stretched until 5 p.m.

“Homelessness is a justice issue, a faith issue and a dignity issue. When part of the body suffers, we all suffer,” Ginger Gaines-Cirelli said in an interview. The senior pastor at Foundry United Methodist Church, an official Way Home Campaign partner, said she marched to represent her congregation.

James Staton a native Washingtonian who has been homeless for more than four years, saw things more plainly: “We’re homeless.  Give us more money for housing.” 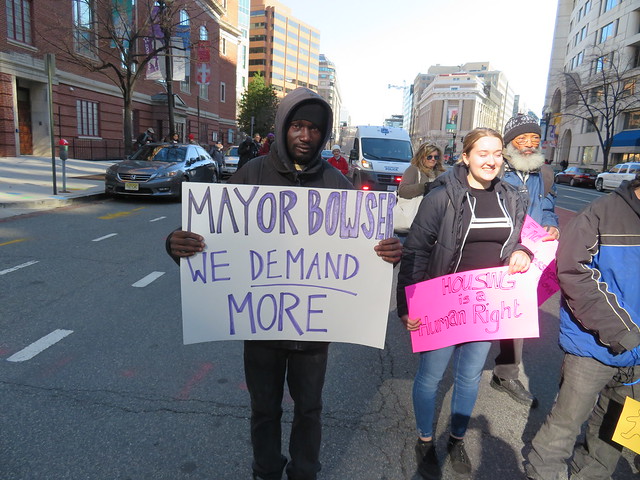 James Staton at the back of the march, starting on New York Avenue, NW. Photo by Ken Martin

The full schedule of D.C. Council public committee hearings regarding the FY2019 budget draft is available at http://dccouncil.us