This article is part of our 2021 contribution to the DC Homeless Crisis Reporting Project in collaboration with other local newsrooms. The collective works will be published throughout the day at DCHomelessCrisis.press.

On an early Friday morning in October, Foggy Bottom advisory neighborhood commissioner Yannik Omictin stood alongside a grouping of tents on Virginia Avenue NW and answered questions from unhoused constituents in the area. Omictin, 21, only just graduated from nearby George Washington University with a bachelor’s in geography and political science this past spring; he won a 2020 write-in race in a single-member district consisting primarily of several GWU residence halls. Yet he is already well-known across the city for his work advocating for the rights of people experiencing homelessness in his neighborhood.

Omictin does the walks weekly, though usually not on his own or in the morning. Each Friday he accompanies a group of community service volunteers and activists for a tour around Foggy Bottom to ask after the needs of the unsheltered residents living in the area. Omictin says that other elected members of ANC 2A join in on the evening treks with People for Fairness Coalition and Ward 2 Mutual Aid.

“We just check in on people to make sure that they’ve got what they need. And we have supplies on hand [such as] snacks and toiletries and other essential items,” Omictin said.

He added that they also help unsheltered residents get in touch with case managers in instances where they don’t have access to a phone.

On this morning, two people living in an encampment along Virginia Avenue NW asked Omictin about the District’s new pilot program that promises to connect encampment residents with housing vouchers. They also asked some questions about planned encampment closures at New Jersey Avenue and O Street NW, the NoMa underpasses at L and M streets NE, and the area surrounding the intersection of E Street NW and 20th and 21st street in the Foggy Bottom area as part of that program. 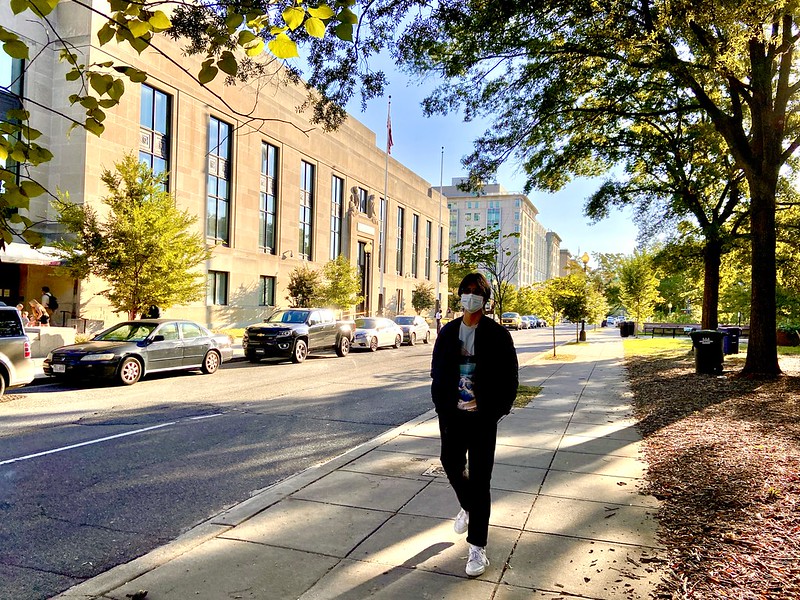 Yannik Omictin says he goes for regular walks through his neighborhood to chat with constituents about their concerns. Photo by WIll Schick

Omictin said that many people are still confused about the city’s plan to permanently evict people from several large encampments and place them into housing. What’s most confusing about the new program, he said, is how the city is marketing the idea.

“One of the most dangerous pieces of the narrative that’s being woven by the Bowser administration — and also by people who are rather dismissive of unhoused people — is this idea that housing is this thing you can just give people,” Omictin said.

The housing process, he points out, is much more complicated. After being awarded a housing voucher, a person still has to search for and apply for a home to live in. And landlords have been known to discriminate against prospective tenants once they learn the tenant is reliant on a voucher to pay rent.

Omictin has also advocated for the D.C. Council to invest more in general to help the unsheltered residents living in his jurisdiction, including funding for sanitation interventions such as mobile showers more accessible to people who are experiencing homelessness.

Evelyn Hudson, another commissioner on ANC 2A and a regular attendee of the weekly walks, said she is also concerned with how the city plans to manage the new pilot that connects unsheltered residents with housing vouchers while simultaneously evicting them. The full commission has not taken a stance on the program. 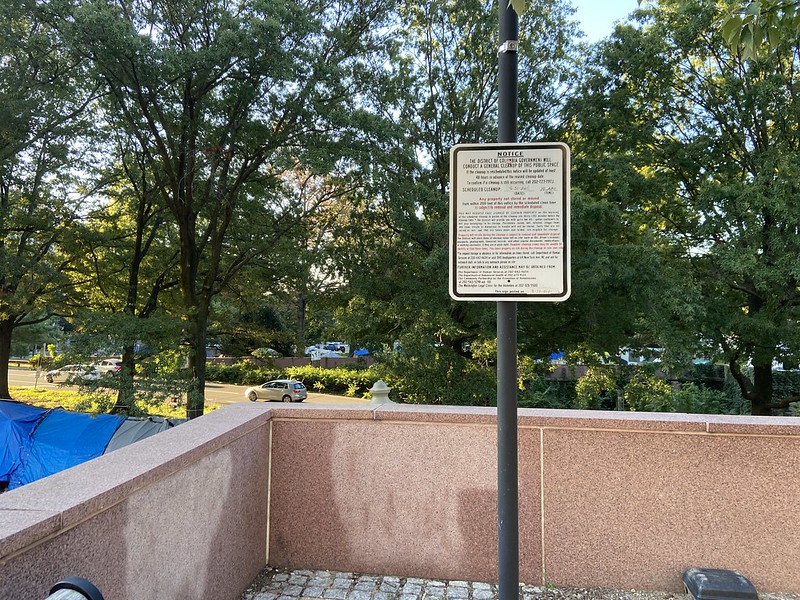 A posted sign outside an encampment by Virginia Ave NW in Foggy Bottom alerting unsheltered residents to the next planned cleanup. Photo by Will Schick

“All I’ve heard about it is that the mayor has transitional housing. Where is it?” Hudson asked, skeptical that all of the people displaced will obtain homes through the city.

At the end of September, the District said it would provide temporary housing to any of the encampment residents who were on its list to receive housing. A week later, Deputy Mayor for Health and Human Services Wayne Turnage said people approved but waiting for housing would be able to enter the PEP-V program. Pandemic Emergency Protection for Medically Vulnerable Individuals provides hotel rooms in place of a shelter bed for people medically vulnerable to COVID-19.

Even so, not everyone at the first sites cleared as part of the pilot program ended up in housing.

Hudson, a native New Yorker, came to D.C. 20 years ago and initially worked as a teacher for children with special needs within the city’s public school system from 2001 to 2005. Graduating with a bachelor’s in English language arts in 1976 from Hunter College, Hudson said she initially intended to become an English teacher.

But she opted instead for special education after someone persuaded her to consider it.

During her time at D.C. Public Schools, Hudson says she regularly battled the bureaucracy to get more resources and resolve issues with her pay. Eventually, she lost her job — though not without taking away some valuable lessons in dealing with difficult people.

When Hudson thinks about the District’s new plan to connect unsheltered residents with vouchers, she says she’s reminded of her own past experience with housing.

From 2005 to 2011, Hudson stayed at a shelter until she found stable employment and secured permanent housing. Drawing on this experience, Hudson says she wants more answers from the city about how it plans to connect people living outdoors to housing.

Since 2011, Hudson has been a regular participant in programs offered through Miriam’s Kitchen, a nonprofit that provides services to people experiencing homelessness. She says her involvement there has helped her maintain a connection to her unhoused neighbors through the years. She regularly listens to concerns they raise about issues ranging from lack of sanitation services to traffic safety. Hudson says she wants to be sure to use her position in elected office to represent all her constituents, whether they are housed or not. 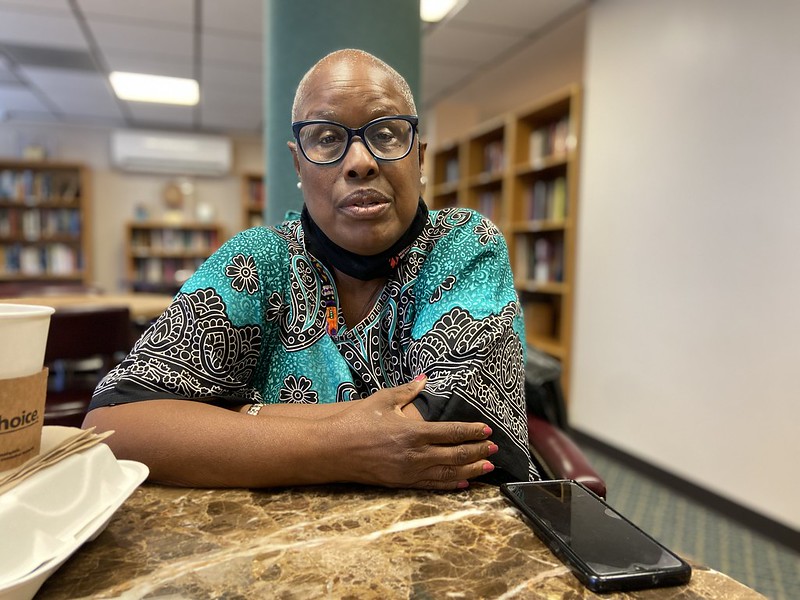 Evelyn Hudson says that she still has questions about the D.C. government’s plan to close encampments in the city. Photo by Will Schick

She also says she would be concerned if the city’s plan ends up being to simply relocate all the unsheltered people living in her neighborhood into a single isolated building just so they are out of sight.

“What’s the problem with homeless people all [living] in the same place? You’re re-creating something that is worse than you had the first time,” Hudson said.

She added that years ago, she lived in public housing in Brooklyn,and saw first-hand the problem of concentrating poverty all in one place. For this reason, she says she’d prefer that the city ensure that landlords adhere to the law and not discriminate against prospective tenants who have housing vouchers.

But, Hudson cautioned, any city plan to connect people to housing resources should be coupled with other services, such as drug and alcohol abuse counseling and mental health and wellness resources.

Echoing the sentiment, Omictin noted that many of his unhoused neighbors rely on counseling and other services offered by nearby providers such as Miriam’s Kitchen.

Hudson — was first elected just one year before Omictin in 2019 — said she is inspired by the work of her colleague on ANC 2A. While she said she doesn’t always agree with how they approach their work, she knows that they are all doing their best to help.

Part of helping includes using their positions to ask the city tough questions. For Hudson and Omictin the most important one right now is straightforward.

“Why does a promise of housing have to be followed up with a threat of eviction?” Omictin asked.