Ahead of the “State of the District” address, residents held their own forum on ending displacement

Just ahead of Mayor Bowser’s State of the District address, demonstrators gathered to highlight city policies they said either increase the risk of homelessness or lead to the displacement of the District’s long-time low- and middle-income residents. Several dozen clergy and community organizers and city residents held the March 15 Rally Against Displacement, outside the University of the District of Columbia, where the mayor’s speech was to be delivered.

A banner that read “The People’s State of D.C.: Speak Out Against the Displacement of Our Communities” served as the literal and figurative backdrop of the rally.

Central to all of the topics discussed was an ongoing process to update the Comprehensive Plan, the District’s 20-year framework for infrastructure, public services and capital investment. D.C. Council held its first public hearing on the Comprehensive Plan Amendment Act five days later, on March 20.

Rally organizer Parisa Norouzi of Empower D.C. said Bowser is supporting developers’ desire to weaken elements of the plan, including a requirement to conduct impact studies. “[Developers] don’t want to do the math because they know the impact,” she said.

Public transportation figured prominently among the issues the group called upon the mayor to address. Residents’ access to food, schools and community services is limited by fare hikes, service cuts and the privatization of public transit, according to Siggy Meilus, executive director of Americans for Transit.

“What good is a job if you can’t get there?” Meilus said. 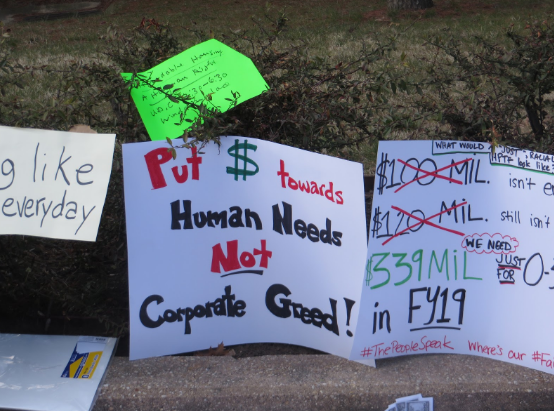 Signs created by attendees at the People’s State of D.C. rally. Photo by Reginald Black

What’s more, race is a factor in job opportunities and the income they provide, according to a 2017 report by Maurice Jackson, who chairs the D.C. Commission on African American Affairs and teaches in the history department at Georgetown University. The annual median income for White D.C. families is $120,000, while it is $41,000 for Black families, according to the study. Jackson also documented an increase in both the number of African Americans leaving the District and the number of White people moving in.

“The fact that we are currently living in one of the most racially segregated cities with one of the largest wage gaps between races is not by accident but rather by design,” Aja Taylor, the advocacy director for Bread for the City, said at the rally.

Taylor also presented a list of demands that included public restrooms for residents experiencing homelessness, emergency rental assistance, and full funding and implementation of the Neighborhood Engagement Achieves Results Act. The bill went into effect in 2016 and approaches violence prevention through the lens of public health by investing in communities.

[Read more: Ward 8 Residents Outraged by Low Funding for Housing and NEAR Act in $13.8 Billion Budget]

“This city has been making promises and commitments to residents for as long as we can all remember,” Taylor said, “It is past time to make good on those promises.” 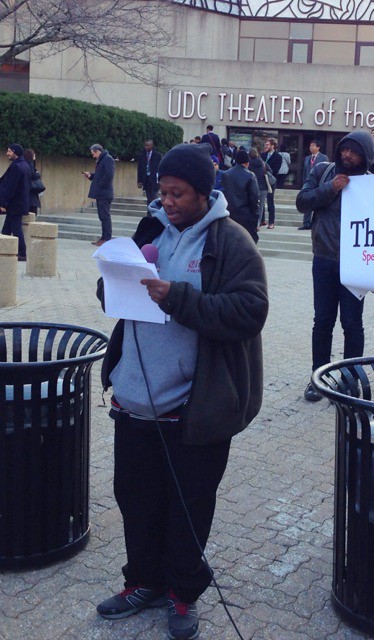 Accountability was a demand that 40-year-old Washingtonian Tyrone Chisholm also made clear. He described himself as having “a good work ethic and skills” but said that he is seen as “not hirable” despite submitting dozens of job applications. He described being in and out of homeless shelters since his youth and experiencing displacement and declining health for most of his life. Chisholm is in a rapid re-housing program but fears he may lose the apartment when the short-term subsidy runs out if he cannot find work soon.

“We are calling on Muriel Bowser to prioritize us as an asset,” Chisholm said. “When the people speak, Bowser, move your feet! … No more lip service.”

A resident from the Brookland Manor apartments in Northeast D.C. agreed with this sentiment. Cheryl Brunson said the planned redevelopment of the community she has called home for 24 years will have a reduced number of affordable apartments. She accused Bowser of being ignorant to what is happening in low-income communities and letting developers “take over.” Brunson also cited stories of the criminalization of residents as an effort to ease the path to redevelopment. She questioned, for instance, infractions for leaning on a fence, smoking a cigarette or having a visitor. 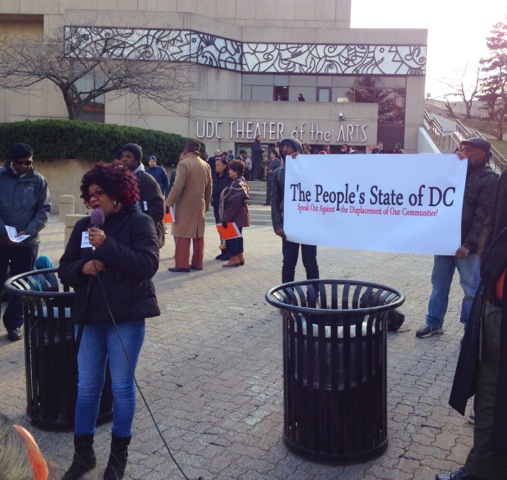 “Bowser works against the best interests of citizens,” said Sean Blackmon of Stop Police Terror Project D.C., an organization looking to change what it calls a racist and militarized system of policing. “She’ll paint a rosy picture, and she won’t speak to the depth of the severity of the issues facing many citizens. We’re here to call her out on her role.”

In her address, Bowser committed to bringing the District more affordable housing and new job-training programs, and introduced an effort to integrate mental-health services into local police responses. Despite criticism that her administration is moving too quickly to shut down the family shelter at D.C. General — before new, smaller replacement facilities are built across the city — Bowser reiterated her desire to close it this year. In a year in which she is running for re-election, the mayor suggested that she didn’t want to leave an important campaign promise unfulfilled.

“When it comes to closing D.C. General, we cannot move fast enough,” Bowser said. “That shelter is an embarrassment to our city, and I will not be the mayor who passes up on the opportunity to demolish it.”

She argued that in the three years since she’s taken office, the city has made progress on helping people prevent homelessness or find housing. She said that 3,900 single adults have been connected with permanent supportive housing and called for more investment in permanent supportive housing for seniors on fixed incomes. In the past year, the city provided $1 billion to affordable-housing efforts, on top of 5,300 units that she said were built since 2015. 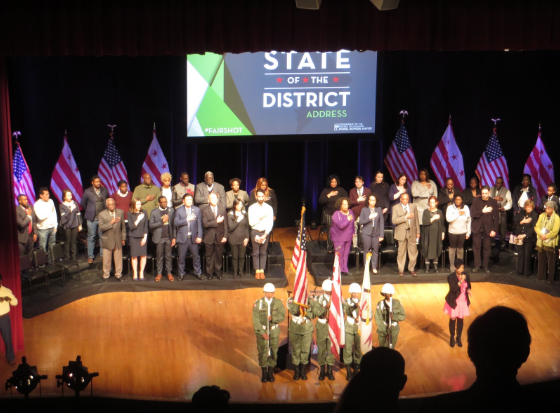 Bowser also announced a new program called “Roots to Roofs D.C.,” which she said would be aimed at supporting long-time District residents who are at risk of losing their housing as home values, rents and taxes rise. She said that more details on the program would be presented in the coming weeks.

In last year’s State of the District address, Bowser promised to launch a new “Infrastructure Academy” that would partner with local institutions such as WMATA and D.C. Water to train employees for public works jobs. On Monday, March 12, the academy opened for business, and in her Thursday address, Bowser said it would be “a pathway to the middle class” that would help Washingtonians pursue “sustainable careers.”

“As Washington grows, we’re going to make room for everyone,” Bowser said. “If we all stick together, then the state of the District, and we, are stronger.”

Reginald Black contributed to this report.