Many low-income parents across D.C. grapple with hardships ranging from hunger to gentrification to hospital bills. It’s their reality, part of daily life. But a cadre of them have taken a stand by displaying personal photographs documenting these family struggles.

Kim Williams is one of those parents. She is a “witness to hunger.”

The photography exhibit heralds D.C.’s new local chapter of Witness to Hunger, a national network of parents who have experienced poverty firsthand and are committed to advocating on behalf of their families.

With a gentle smile and a strong voice, Williams described in an interview how she survives on an income high enough to deny her welfare benefits , yet too low to cover her son’s hospital bills and medication. Her private insurance plan only covers 40 percent of these costs.

In order to exhibit how this affects her family, Williams photographed her son with a bandage around his head at the hospital. The photograph shows an adorable young boy with big eyes and an innocent face. But viewers were confronted with the fact that his mother is still struggling to pay the $400 hospital bill for that trip. This and other photos from D.C. low-income mothers and fathers will remain on display at the Town Hall Education Arts Recreation Campus at 1901 Mississippi Avenue SE through January 31. 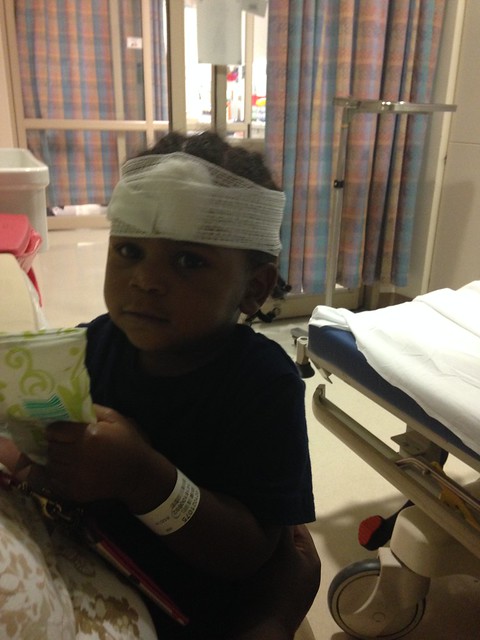 Private Insurance Struggles: My son ran into some furniture at daycare and hit his head. I was notified that he was bleeding and that an ambulance was transporting him to the hospital. I was so worried as I rushed to meet them at the hospital. Once he was bandaged and feeling better, I started calculating the hospital bills that I would have to pay out of pocket. I am still fighting a $400 ambulance bill to this day. Again, I am “over income” for medical assistance for my son, but I struggle to pay for medications and co-payments. -Photo by Kim W., Washington D.C.

Mothers from Boston, Philadelphia, New Haven, and Camden joined Williams and other Washington parents at the January 14 event. Although there are five Witness to Hunger chapters nationally, campaign founder Mariana Chilton finds this new D.C. location crucial to the project.

“We also would like to have our exhibit at the White House. We think the President needs to be paying attention at a very deep level to what the struggles are for families across the country,” said Chilton, who also directs the Center for Hunger-Free Communities at Drexel University in Philadelphia. According to her, there is a great potential for low-income families to help inform policymakers on Capitol Hill through hearings in front of the Senate and the House. In 2014, Chilton orchestrated a pop-up Witness to Hunger exhibit for Congress. Now the campaign has a chapter based in the nation’s capital to continue this work. Chilton says she will also continue to advocate for solutions to issues that are specific to the District, alongside the new members of the D.C. chapter.

Among the many problems that low-income parents face locally, housing was one of the largest and most pertinent to the families that shared their stories on January 14. Chilton pointed out that two of the photographs being displayed were from different witnesses who happened to be standing in the same long line waiting for affordable housing. They both felt compelled to show the public what these lines really look like after standing in the cold for hours. One of them claimed that other people in need would show up when the doors opened and cut in front of people who had been freezing for hours simply because they knew the employees at the desk.

Renee spoke through tears to the assembled crowd about her life as a homeless mother. A cosmetologist, Renee works for a multimillion dollar company for more than 40 hours per week. “D.C., how much longer do I have to struggle? How much longer is my income bracket not enough to afford affordable housing? Can I live in the 14th view? Can I live in any of these new developments in D.C.?”

She joined the rest of the mothers in asking, not for a handout, but a step up. Most people spoke about wanting to become independent from the system, but not having the opportunity to do so regardless of how hard they worked.

“We all just want to fit in,” Renee said. 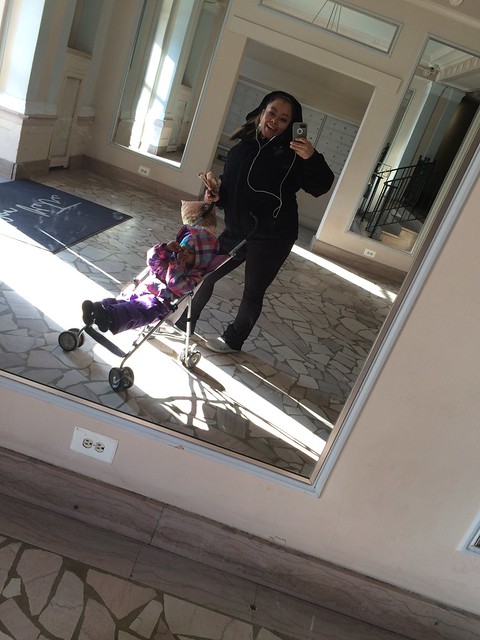 Something to Smile About: I was still homeless, and I was still struggling to take my daughter to see a nanny so that I could go to work. I had to take a metro and a bus and the commute was difficult and I was feeling sad. But I looked in the mirror and thought to myself that there’s always something to smile about. Even though I was the one who was exhausted, my daughter was the one who was falling asleep, and that made me laugh. -Photo by Judith R., Washington D.C.

Chilton hopes to push for higher wages in D.C. so that people don’t have to rely on public assistance and do not have to choose between basic needs, such as Williams choosing to feed her family or pay the medical bills. Such financial compromises were universal among event participant. Most witnesses spoke of some medical ailment that they were struggling with, some even as a result of working hard all of their lives and the stress that is associated with it.

One mother attributes her high blood pressure at age 38 to the prohibitive costs of healthy food and the stress of supporting her family as a single working mom. Another mother struggles with carpal tunnel syndrome, arthritis, and back pain. Another described the difficulty of finding a therapist for her children while on Medicaid.

A speaker at the January 14 event acknowledged that it can be difficult for elected officials to create successful programs when they may be a few levels removed, regardless of their intentions. Organizers of the District chapter of Witness to Hunger intend to be a crucial asset for reforming programs to solve these struggles. They have met with policymakers to explain how existing programs are or aren’t working for the people they are supposed to serve. And some public officials will be visiting the event on private tours to see the photographs and read quotes from the witnesses.

The witnesses in D.C. would like to become a direct link for officials to speak with people whom their legislation and agencies are affecting. Williams believes that the high cost of living in D.C. needs to be considered more when government workers calculate what assistance is necessary for certain families. The witnesses would like to be at the decision-making table in order to direct the conversation away from programs that have been tried and to suggest solutions.

Last names of witnesses who spoke publicly were not used in order to protect their identity.