Stations of the Cross:
A Pilgrimage for Art Lovers

“‘Disrupting the Cradle to Prison Pipeline,” is by an artist who served 20 years on death row for a crime he did not commit. After nearly 28 years in prison, Ndume Olatushani was released in 2012 and has been advocating against the death penalty by telling his story.  He is currently one of three artists commissioned for the D.C. Stations of the Cross exhibit, a new way for people to reflect on the story of Jesus’s crucifixion.

Olatushani created an expansive art installation to represent Station One: Jesus is condemned to death by the mob. The work most prominently displays an orange-jumpsuited prisoner trapped in a cage that replicates the four-by-nine-foot solitary confinement cell that he was imprisoned in for 23 hours a day.

Outside the United Methodist Building, all of the figures pointedly face the Supreme Court.

This is the goal that co-curators Reverend Dr. Catriona Laing, interim associate rector at The Church of the Epiphany in D.C., and Dr. Aaron Rosen, religious studies professor, have in mind: to give people a new way to experience the story of Jesus’s journey and struggles on the day he was crucified using new and familiar works of art that transcend any one religion.

A traditional representation of the 14 Stations of the Cross. Wikimedia Commons

Laing was inspired in 2016 by Rosen’s contemporary take on the Stations of the Cross. Traditionally the stations are a series of 14 small representations placed along a path at a church or a series of chapels. The London Stations of the Cross exhibit, however, took people across the city to churches, the National Gallery of paintings and public memorials such as the statue of Mahatma Gandhi in Parliament Square.

By making one’s way around the city, Rosen said, it would bring a spiritual meaning, a feeling that one was truly taking a pilgrimage that would “stimulate interfaith and intercultural dialogue.”

“I was inspired by how it can speak to a wider audience,” said Laing, “about how the meaning of being a human is to know all the sides, to know suffering as well as joy, to know hatred as well as love.”

A collage of the contemporary D.C. 2017 Stations of the Cross exhibit. Photos by Ian Erasmus

Laing reached out to Rosen, and they mapped a path for the 2017 D.C. exhibit, including places such as the MLK memorial, the American University Museum and collaborating cathedrals and churches. The exhibition opened on March 1 and will continue until the end of Lent on April 13. The exhibit is supported by the Cambridge Interfaith Program, Coexist House, the Episcopal Evangelism Society and Trinity Church, Wall Street.

People are encouraged to travel the Stations trail by referring to the Coexist House website or by using the custom-made app Alight: Art and the Sacred. Both provide a map, descriptions and podcasts to accompany each station.

Lent, a religious observance meant as a time for reflection on Jesus’s sacrificial 40-day fasting in the wilderness, is also an opportunity to have conversations about social injustices and suffering in the world, said Laing.

“The point about Lent and these contemporary stations,” she said, “is that it evokes these important questions and challenges of our society today. Jesus was a refugee, Jesus was homeless, Jesus had this important encounter with women [Station Eight] — we can reflect on these parts of Jesus’s life to explore these issues.”

The other artists joined the project for a second time, having created work for the London exhibition. Leni Diner Dothan displayed two works for D.C.’s Station Eight, the representation of when Jesus heeded the women of Jerusalem to not worry for him but for their own futures and that of their children.

“Mother and Child” displays a photograph of Dothan and her young son as they look into a black void. In the video installation “Dead End” Dothan isolated the lens to only her bare feet walking the Via Dolorosa in Jerusalem, the same path that Jesus is said to have walked on the way to his crucifixion.

“I wanted to create the feeling of being trapped, not knowing where you are and can go, of not knowing the future,” Dothan said in reference to both works.

Michael Takeo Magruder created “Lamentation for the Forsaken” for Station Nine, when Jesus falls the third time. By cataloguing and selecting news and social media, Magruder made a fluid, “digital tapestry” of Syrian names and images overlaid with the iconic Shroud of Turin, juxtaposing the Syrian refugee crisis with the story of Christ.

“I wanted to create a space to think about an issue in a different way … make connections people wouldn’t have thought to put together,” said Magruder. He expressed his surprise at the enormous scale of the crisis. “It’s not acceptable. In a democracy, we are all partially to blame.”

Other stations are readily recognizable such as the Vietnam Women’s Memorial, chosen to represent Station Four as a contemplation on the sorrow and anguish of those who remain after a person’s death.

And perhaps you may have walked by some already. On G Street NW, in the heart of downtown D.C., is a figure that many pedestrians could easily mistake for its real counterpart: a person wrapped in a blanket and lying on a bench. “Homeless Jesus” is only recognizable if you were to stop and look closely at the holes in the statue’s feet and the small accreditation plaque off to the side.

“The world sees them [the homeless] as irrelevant and insignificant,” Laing said, offering her own reflection on Station Ten: Jesus is stripped of his garments. “We must have time for them and not dismiss them immediately. Someone else’s time is as valuable as your own.”

For more information on this exhibit, “Alight: Art and the Sacred” is available through the Google Play and iOS app stores. A devotional walk will be led by Catholic Charities CEO John Enzler on April 7 at 11:30 a.m. through the three stations on G Street NW. The walk will begin in the sanctuary of Church of the Epiphany and end with lunch at Catholic Charities, where the “Homeless Jesus” statue resides. 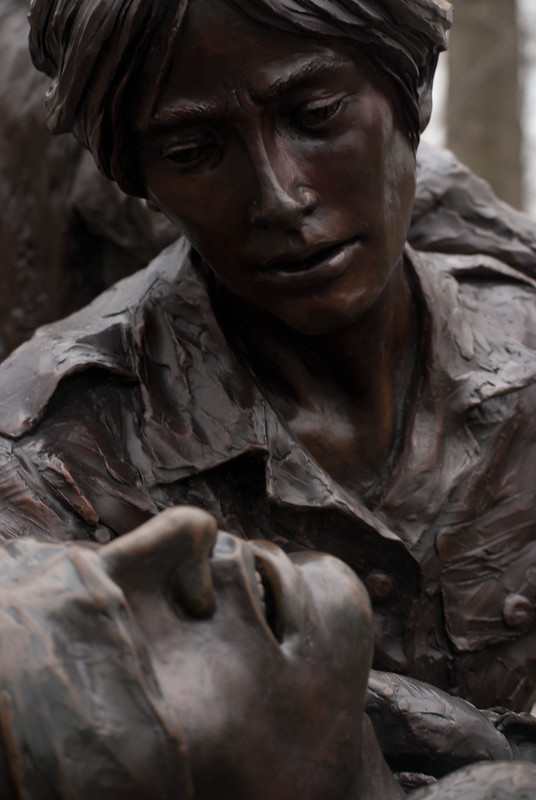