D.C. Councilmembers David Grosso and Robert White held a press conference on Jan. 24 to announce their proposed Sense of the Council Resolution, which seeks to affirm the rights of marginalized D.C. residents during President Donald Trump’s administration.

The resolution, while still in its early stages, includes language that restricts D.C. from complying in a Muslim registry and affirms the District’s status as a sanctuary city.

“We must embrace that we are a sanctuary city and we will protect families and communities from being torn apart by immigration policies rooted in fear and bigotry,” Grosso said. “We must declare that we will not tolerate aggressions —  guided in patriotism and security — against our Muslim brothers and sisters. We must protect the rights of women and girls and our LGBTQ community.”

Following the councilmembers’ remarks, several representatives of human rights groups were invited to speak, including Abdur-Rahim Briggs of Project Briggs, Darakshan Raja from the D.C. Justice for Muslims Coalition, Sapna Pandya of Many Languages One Voice and Ruby Corado of Casa Ruby.

Raja commended the resolution’s goals to uphold D.C. as a sanctuary city, which limits D.C.’s cooperation with the Department of Homeland Security and Immigration and Customs Enforcement to turn over people for deportation. He urged the councilmembers to take additional measures to ensure that the voices of directly-affected individuals are heard. Similarly, Pandya recommended that the resolution take into account the self-determination of marginalized community members through the establishment of a task force. 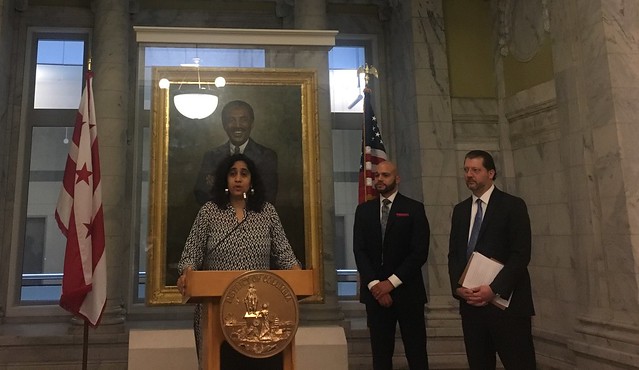 Sapna Pandya speaks on behalf of Many Languages One Voice. | Photo by Jeanine Santucci

Along with the resolution, Grosso said he will introduce two additional bills in an effort to make the city more welcoming for all residents. The Language Access Act, which Grosso has also introduced in previous years to benefit residents who are not proficient in English, will improve standards for language access in education and government services. The other bill will allow permanent residents of the District who are not citizens to vote in local elections, including for councilmembers, the mayor and Advisory Neighborhood Commissions.

White recognized the intersection of many identities, including the marginalization faced by homeless individuals, but said that the steps he takes as a councilmember to uplift the homeless community are distinct from the resolution.

“What I’ve seen from President Trump so far is a dismissal of those of us at the bottom of the economic scale, of the social ladder and I don’t think that we’re going to see a refocus on those people, and that’s why we need the D.C. Council and our locally elected officials to really step up for those people,” White said in an interview with Street Sense.

During her speech at the conference, Corado described how her experience as a formerly homeless and undocumented transgender woman of color who also engaged in sex work has made her part of a targeted community. “I’m counting on all of you so that I and the people I serve will never have to go back to the conditions I grew up in,” she said.

Corado cited her own activism work with D.C. Council in the 1990s as contributing to her escape from the cycle of poverty before founding Casa Ruby, a nonprofit that provides shelter, support groups, meals and more to the local LGBT community.

“It’s very important to be inclusive of everyone who is at those intersections in the margin of survival,” she added in an interview with Street Sense. “For me as someone who’s survived all of these things, including homelessness, it’s important that we center our work around those people.”