The first D.C. Council hearing on Mayor Muriel E. Bowser’s plan to replace the family shelter at D.C. General with new facilities in each ward was a 13-hour affair with 90 witnesses who expressed concerns about the price of the plan and how the shelter locations were picked.

While all of the council members expressed support for the mayor’s proposal, which could cost the city up to $300 million, some have problems with specific details, and residents from Ward 3 and Ward 5 have raised questions about whether the locations in their Wards are appropriate.

Ward 5 Councilmember Kenyan R. McDuffie (D), who has expressed concerns with the plan from its inception, opposes the location of his ward’s site, an industrial area of the Langdon neighborhood close to several industrial facilities and a bus depot. McDuffie said he was concerned “about placing homeless children and families in an industrial neighborhood,” and that the majority of his constituents were not opposed to housing another shelter within their Ward.

“My residents are not against the closure of D.C. General. Most of my constituents do not even oppose adding another shelter to Ward 5,” he said, “But we want details on how the location was selected.”

The Ward 5 site would be near a bus depot which holds anywhere from 150 to 300 buses at any given time, nightclubs and a trash waste management facility. Many are concerned about the health effects on residents of a shelter in that area. Amber Harding, an attorney at the Washington Legal Clinic for the Homeless, said her organization fears that the respiratory and immune systems of already vulnerable homeless children could be compromised.

“We believe that it may be less safe for families than D.C. General,” she said, “Our biggest concern is the impact of the bus depot because it includes a lot of stationary emissions sources. Boilers, generators, paint fumes, gasoline dispensing stations, miscellaneous equipment.”

McDuffie suggested that the D.C. government should instead pick a site in Ward 5 based on a list of suggestions given by Ward 5.

“It has long been my belief that the residents, at the end of the day, are the experts about the issues going on in their neighborhood,” he said.

While the concerns about the Ward 5 site are focused on the well-being of its future inhabitants, residents near the Ward 3 site are more concerned about a shelter’s impact on current residents. Some fear that the influx of at least 38 new families could strain neighborhood resources, including overwhelming an already-overcrowded Stoddard Elementary school.

Last Monday residents of Massachusetts Avenue Heights, Cleveland Park, and other Ward 3 neighborhoods gathered at the local police station to discuss a resolution asking the city to revise aspects of the Ward 3 site. Many attendees agreed with the resolution’s demands, which called for the council to carefully review whether the city can change the site’s zoning to allow a shelter. But the resolution also proposed that the current location be downsized or done away with altogether. A few Ward 3 residents proposed that the $56 million being spent on the Wisconsin Avenue site should instead go toward renovating D.C. General. Most residents, however, want the Ward 3 site to be split into two or three smaller sites spread around the ward, over fears that the single large site could “change the look and feel of the neighborhood,” as one resident put it. 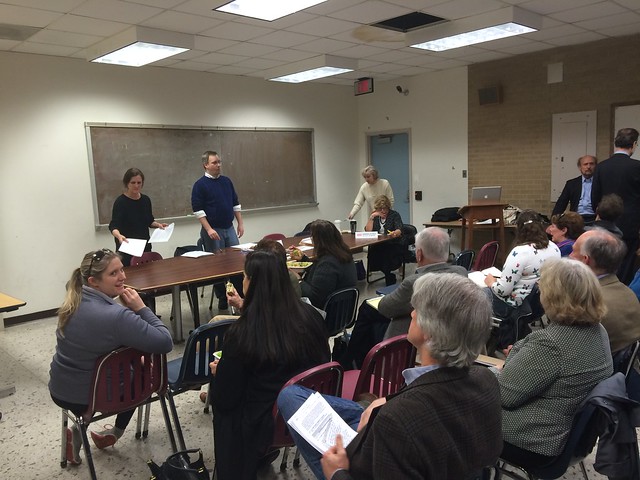 A copy of the ANC 3C resolution can be viewed here.

Ward 3 residents have also been critical about the shelter’s costs. Anita Crabtree, a Ward 3 resident speaking at the council hearing, cited some financial statistics about the Wisconsin Avenue site that were reported by The Washington Post. “Mayor Bowser proposes spending $56 million to lease 38 units that would be built on Wisconsin Avenue NW, near Observatory Circle, in Ward 3. That amounts to an estimated $6,187.26 in monthly rent per unit over 20 years,” she said. She also noted that the original 15-year lease could be extended by five years, and increasing interest rates mean rent could increase even higher. The average cost of rent in the area is around $4000 per month.

Many are also concerned that the plan is a sweetheart deal for politically connected developers, who will own the sites after the city’s leases expire and potentially leave the District’s homeless in the same place many years from now. Still, advocates are optimistic that all of these concerns can be addressed without making the city’s homeless families wait even longer for new facilities.

“Is it more important to pass this plan fast? Or to get it right?” McDuffie asked Harding, of the Washington Legal Clinic for the Homeless.

“I think we can do both,” she said, “We can close D.C. General quickly and in the right way. But we don’t want to have to find new shelters when the lease is up in 15 years.”