Still Boarded Up: A long con in Congress Heights?

On May 15, a D.C. Superior Court judge will hear arguments regarding the selection of a new receiver for a dilapidated apartment complex in Ward 8. The contested buildings are at the heart of a civil case brought in 2016 by the Office of the Attorney General for the District of Columbia over ownership and redevelopment of the site, which is next to the Congress Heights Metro Station.

On May 7, Judge Kelly Higashi heard testimony from Geoffrey Griffis, the land developer at the center of the dispute. Griffis’s company, CityPartners, was added to the complaint last year after it acquired properties from Sanford Capital in December 2017.

In a statement that stunned the judge and the District’s legal team and derailed the hearing, the CityPartners attorney said while questioning Griffis that the defense now wants a full termination of the court-appointed receivership in place since 2017. Higashi refused to consider the request because attorneys hadn’t raised the issue in advance of last week’s proceedings.

The case has a long, tortured history. In September 2017, the court appointed David Gilmore, the current receiver, to manage rehabilitation of the properties after residents reported neglect under then-owner Sanford Capital that included mold, rodents, and broken heating. Such conditions were found to be systemic in that company’s portfolio, and the settlement of a related lawsuit resulted in a court order requiring Sanford Capital to divest from all of its properties in the District and prohibiting the company from operating in the city for the next seven years. 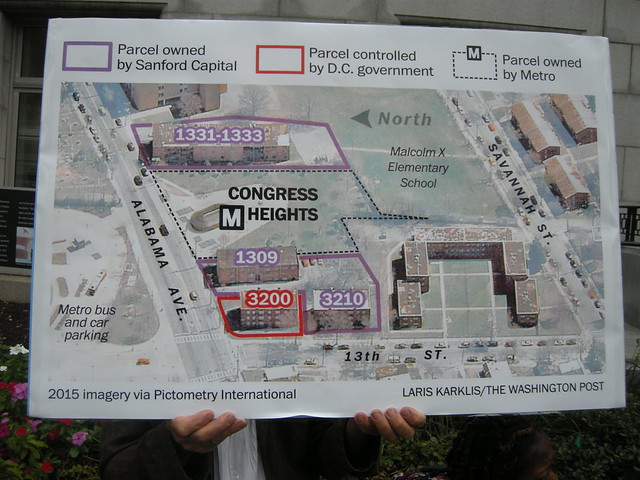 A 2015 Washington Post infographic highlighting the Congress Heights properties since obtained by CityPartners was printed by Congress Heights tenants and displayed at a Sept. 6, 2017 rally and press conference in front of the Wilson Building. File Photo by Reginald Black

For the specific properties in Congress Heights — 1309, 1331 and 1333 Alabama Ave. SE and 3210 13th St. SE — a judge had awarded the tenants the exclusive right to negotiate with Sanford to purchase the buildings in 2017. Yet the property was instead transferred to CityPartners with a deed in lieu of foreclosure, which the attorney general argues violated the previous court order and the tenants’ standard rights under the Tenant Opportunity to Purchase Act. According to a Washington City Paper report, tenants sued CityPartners in 2018 to have the properties returned to Sanford Capital so they could then be sold to the tenants, who intended to transfer their TOPA rights to the National Housing Trust/Enterprise Preservation Corp. That case is still pending, with about 10 tenants still living in the buildings. In the meantime, the only thing standing between Griffis and total redevelopment of the site has been the court-ordered receivership to ensure repairs aimed at bringing the building up to housing code.

Then, on May 3, the District filed a request for the “complete dissolution” of the CityPartners subsidiary 5914 LLC. The motion states the company, in partnership with Sanford Capital, allowed the Congress Heights properties to deteriorate in order to force the remaining tenants out, which the District argues is “particularly egregious” given that the majority of tenants at the property have “modest financial means” and are therefore unable to seek out new housing when faced with unsafe housing conditions.

The District claims that Griffis and Sanford Capital planned to allow the Congress Heights properties to “decline into slum-like conditions” in order to “constructively evict as many tenants as possible” and make way for a profitable redevelopment. Attorney General Karl Racine alleges Griffis created 5914 LLC in 2013 solely to assist in this purpose. 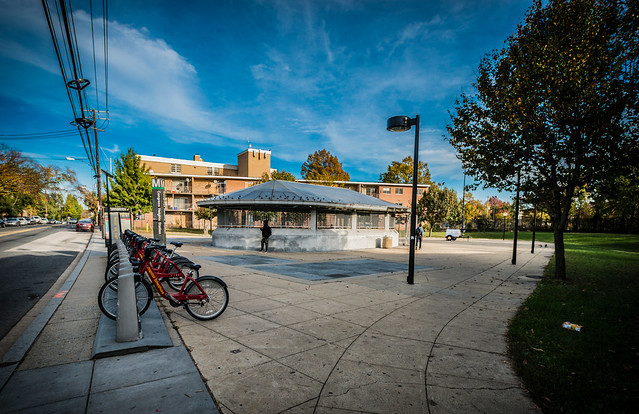 The properties in question are located on prime real estate next to the Congress Heights Metro station. Photo by Rodney Choice (2016)

CityPartners is claiming the properties are no longer economically viable for renovation and seeks termination of the receivership to allow for development to proceed. The company’s legal team said CityPartners came to this conclusion after a site visit the previous day that, according to the defense, was the first opportunity for the respondents to view the properties at 1331 and 1333 Alabama Ave. SE since a fire broke out in November under the receiver’s management.

However, the brief the defense submitted when requesting the restraining order on April 26 included an attachment with 22 images of the units in the fire-damaged properties on Alabama Avenue, contradicting the CityPartners legal team’s claim that prior to the site visit the company had been unaware of the extent of demolition undertaken by the receiver.

CityPartners also alleges that the receiver has exceeded the plans for renovation.

“The receiver’s plan had always called for minimally invasive cutting out sections of drywall,” the defense attorney said in court. “Our clients walked in yesterday and for the first time realized that extensive demolition has occurred at these building.”

Higashi said she was “extremely disappointed” the CityPartners attorney failed to present the new request at the outset of the hearing, when the judge outlined both parties’ demands. Stating that the District was not prepared to argue for the continuation of receivership, the judge agreed to hear arguments only on the original issues set to be addressed in the hearing. 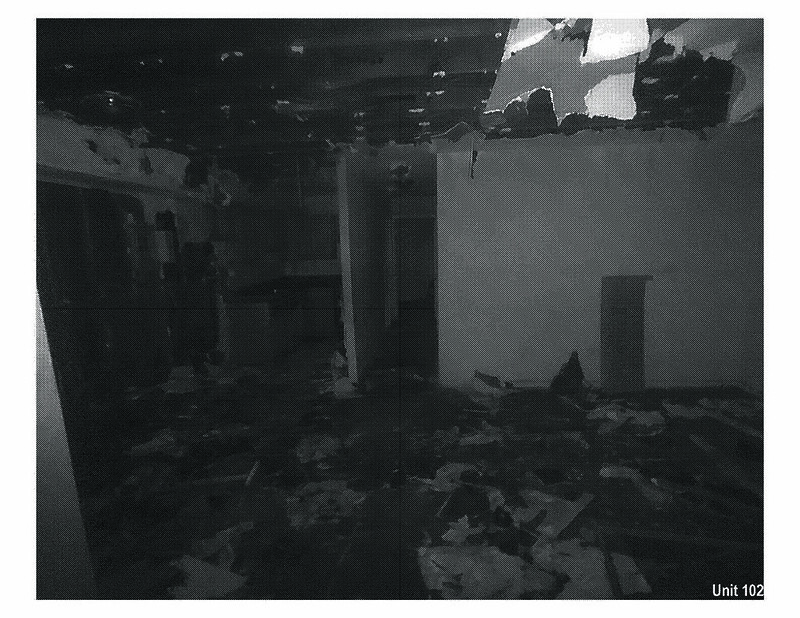 On the docket were the replacement of the receiver, revisions to plans for renovations, the possibility of redeveloping versus repairing the buildings, and compensation to tenants for additional rent they are paying for housing while relocated during the renovation period.

“My job is to make this process as fair as possible to both sides and as informative to the court as possible,” Higashi said. She reminded the defense attorney that, as a basic principle of courtroom litigation, it is improper to completely change the purpose of argument for a set hearing.

Prior to CityPartners’s unexpected request to terminate the receivership, both parties had presented suggestions for a replacement receiver.

Following the judge’s instruction to limit the court proceedings to the original purpose of the hearing, the defense attorney resumed questioning Griffis as the first witness.

Griffis described his company as long committed to projects aimed at supporting communities throughout the District. Though not referenced in the hearing, he has previously made the scope of his project clear: construction of a 446,000-square-foot mixed-use project surrounding the Congress Heights Metro station on the parcels acquired from Sanford Capital. Griffis says the redevelopment project will generate hundreds of jobs in retail and professional services, as well as new tax revenue, neighborhood amenities, and more than 200 residential units split among market-rate and affordable housing.

“Every project that we do is focused on creating a vision and a structure and a use that actually strengthens communities and neighborhoods throughout the city,” Griffis said in the hearing. A rendering of the development envisioned surrounding Congress Heights Metro station, submitted by 5914 LLC in a 2013 zoning application. By Maurice Walters / Architect

Local advocacy groups characterize the actions of CityPartners differently, saying Griffis sought to push out the current residents to make room for the more profitable mixed-use project. In February 2018, Justice First and ONE D.C. organized a protest outside his Cleveland Park home, where demonstrators chanted “Hey-hey, ho-ho, slumlords have got to go!”

But throughout the hearing, Griffis continued to reiterate that he had not blocked the District’s efforts to bring the properties up to code so the residents could return home.

“I have never tried to obstruct or slow down or get in anyone’s way. What I am always interested in is making sure that we have a cost accountability and high-quality control,” Griffis said in reference to his claim that the extent of the renovation and demolition work has exceeded the receiver’s original plans.

As part of his testimony, Griffis presented a series of photos he had taken on a visit to 1331 and 1333 Alabama Ave. SE the day before the hearing.

“You can see there [are] no finishes, there’s no drywall, there’s really no flooring, there’s no ceiling, there are no walls,” Griffis said. Given the current state of the buildings, he said, bringing them up to code and making them habitable would require extensive work, including the installation of new stairs, an elevator, and a sprinkler system.

“At that level, you need to evaluate whether it is sensible or purely wasteful to try and make these functional,” Griffis said. “Or is the best-case scenario to build new construction, to build new code-compliant buildings that would actually provide decent safe, affordable housing?” 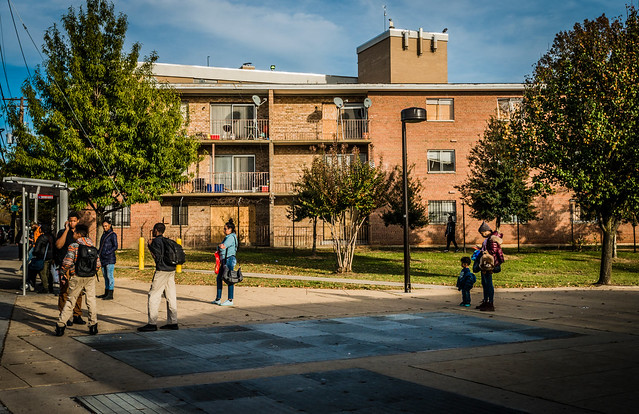 The property at 13th Street and Alabama Ave., SE, as viewed from the Congress Heights Metro station in on Nov. 8, 2016. Photo by Rodney Choice

The District’s attorney, Jimmy Rock, repeatedly said Griffis lacked the expertise to testify as to the state of the buildings at 1331 and 1333 Alabama Ave. But Higashi overruled the objections, stating that Griffis’ professional experience in building construction and renovation prepared him to assess the work necessary to bring the properties up to code.

In cross-examining Griffis, Rock argued that Griffis was aware of the deteriorating condition of the properties when his company acquired them from Sanford Capital in 2017.

The District’s attorney continued to question Griffis on his relationship with Sanford Capital, arguing that he was more concerned with maintaining his public image than investing in the necessary repairs to allow tenants to return to renovated apartments that adhere to code.

Rock also asked whether Griffis would “have any objections to [paying] the differentials of rent that the tenants are being charged for their temporary relocation” while the receivership continues.

In a series of back-and-forth exchanges between the two, Griffis would not state plainly whether he was willing to cover the differential, estimated by Griffis to be $15,000 a month. He had previously agreed to provide each tenant a one-time $52,000 payment to relocate during restoration of the Congress Heights apartments.

“I certainly don’t object to offsetting costs for the temporary relocation of tenants before they move back into what I hope is a brand-new building,” Griffis said. As for paying the rent differential, “I don’t think I have enough information to be forced into ‘Do you agree or don’t you agree?’”

With the conclusion of Griffis’ testimony, less than 15 minutes remained before the hearing had to end. Higashi adjourned the hearing until May 15 at 9:30 a.m., when the District will call a witness from Catalyst Property Solutions, the city’s choice for the new receiver. A mediation session with the judge is also scheduled for 9 a.m. the following day.