Advocates called for “no more homeless deaths” in Washington, D.C. on the drizzly night of December 17. A vigil began at Luther Place Memorial Church on 14th Street to honor 39 men and women who passed away in 2015. Each person’s name had been written on a hand-held poster for participants to carry, along with electric candles. Cities around the nation recognize the deaths of every known homeless man or woman who passed away this year on National Homeless Persons’ Memorial Day.

Washington DC: 41 Homeless Deaths in 2015 from Inciting Media on Vimeo.

“Homeless people are dying,” said Albert Townsend, co-founder of the People for Fairness Coalition (PFC), during his opening remarks. “The single most effective treatment for homeless people is housing.” 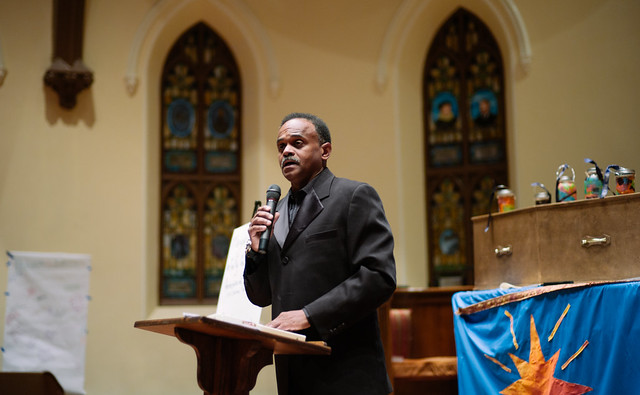 Next, Street Sense Vendor/Artist Ken Martin gave a first hand account of his life dealing with homelessness. Martin suffered two heart attacks in one week, then had been returned to the street immediately after his first heart surgery. “I could have been number 56,” Martin said, referencing the 55 people who were honored at the 2014 vigil.

He went on to reminisce about how he watched a homeless woman seize up, after her complaints of headaches and blurred vision. He lamented the fact that he did not know the woman’s fate and if she was one of the 39 homeless that lost their lives in 2015. 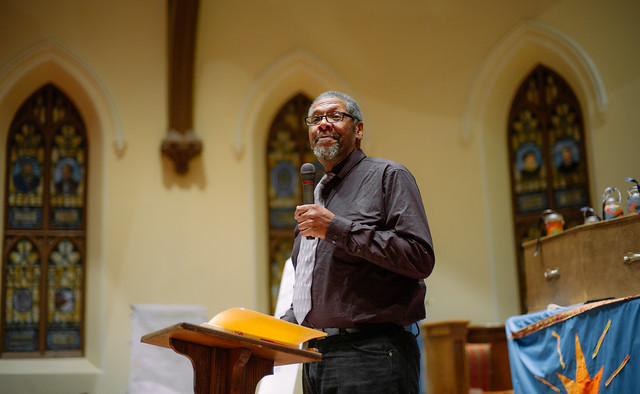 Courtney Pladsen shared the story of David, a homeless man who was able to achieve housing but was also diagnosed with stage four cancer. Pladsen, a nurse practitioner with Unity Health Care, had her own stint with homelessness as a teen. She said David was able to die with dignity in housing, surrounded by those who loved him. He was not one of the 39 people who died while homeless this year.

“People who experience homelessness die 20 to 30 years before their peers,” Pladsen said. 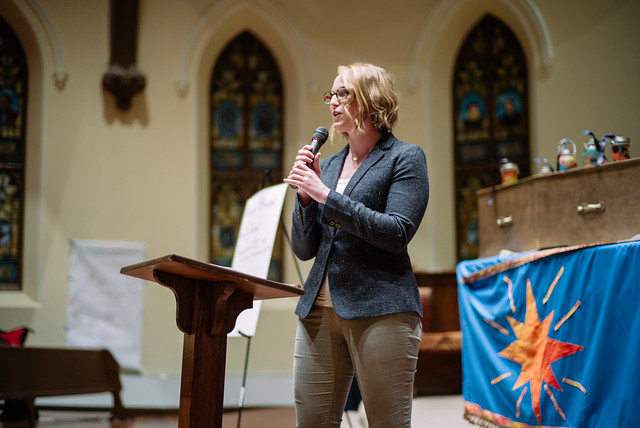 D.C. Department of Human Services Director Laura Zeilinger was the last to speak. She urged the crowd to recognize the humanity in everyone – including the homeless.

“No one chooses to be homeless,” she said. 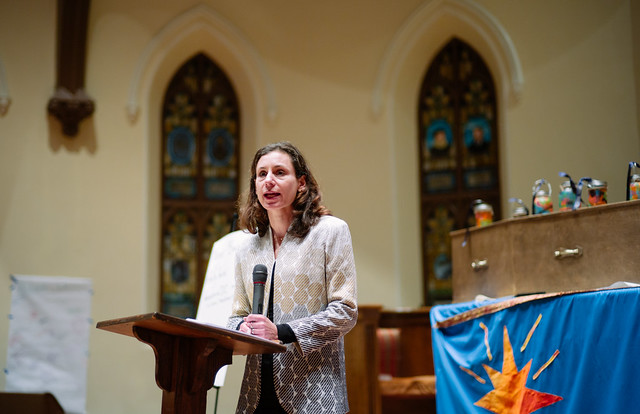 The more than 50 attendees were then led down 14th Street to Freedom Plaza with an empty casket carried by People for Fairness Coalition Coalition members. Along the way, the once-somber group vigorously chanted sayings such as “housing saves lives” and “no more deaths.”

“What do we want?” called Reginald Black, a PFC member, from the front of the line.
“Housing!” responded the marchers.
“When do we want it?”
“Now!”

After everyone arrived at Freedom Plaza, dinner began inside a heated tent. “Tonight’s event is both to memorialize the people who died on the street but also to call for change that will make it so that people will no longer die on the street,” said Elizabeth Falcon of CNHED. “The biggest ask is for the Mayor to continue to fund the plan to end homelessness in D.C. I’m here particularly in support of the investments in affordable housing and permanent supportive housing which provides long term solutions for folks.” After dinner, an open mic event began, welcoming anyone to speak about their experiences while homeless. Or to sing and recite poetry. Freedom Plaza is directly across from the Wilson building, where the D.C. Council meets. It is also in the shadow of the United States Capitol building. Both buildings were highly visible when standing just outside the tent, and both federal and local legislators were addressed during the evening’s open mic event. Ward 1 Councilmember Briane Nadeau was the only D.C. council member to attend the Thursday night events. She thanked community members for being there and told them to keep coming back and demanding that homelessness be a priority. 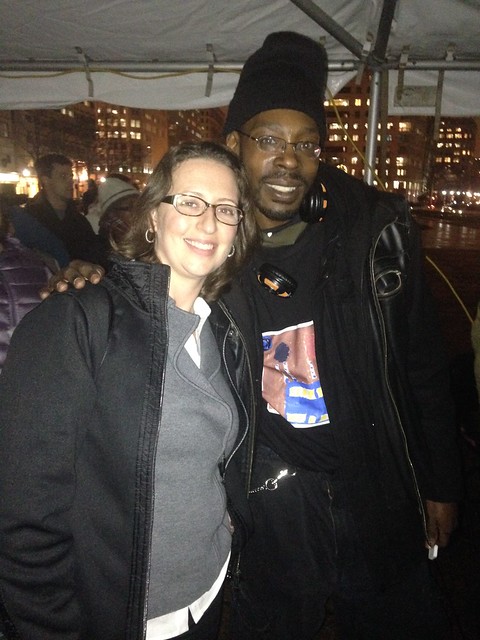 “If we can get City Council and those folks down the street [at the Capitol] behind us, we will save lives,” Robert Warren, co-founder of People’s Fairness Coalition, said.“If we’ve saved one life, just one life, we’ve saved the whole world.” It was expressed throughout the event that both the government and individual groups cannot solve homelessness alone, they must work together. “Even as we were marching down here, we were still walking by people who were sitting out in front of stores, who were visibly homeless…” said Mark Thomas of District Displaced in an interview with Street Sense. “The problem is huge. More people need to get involved. Like they said at the talk, the government can’t just do it, the activists can’t just do it.”

Washington DC: 41 Homeless Deaths in 2015 from Inciting Media on Vimeo.

Marine Corps veteran and Street Sense vendor Robert Williams spoke about the issues unhoused veterans face, including PTSD and lack of employment available to veterans. Williams urged those in attendance to see the homeless as people, not as a “zoo or a showcase.” “Don’t come to help if you just want to make your résumé look good…Homeless people are people and should be treated as such,” Williams said. Angie Whitehurst read an original poem “Wake Up Dead” at the open mic. Her poem expressed the feelings of hopelessness and abandonment she faced when she experienced homelessness: “Woke up dead, from exposure and death/Cold and ill from no house–a home or a place to heal./The cost too high for my town to meet/Now, I am not here for you to touch and see.” Whitehurst’s poem had a hopeful ending: “I hear our Mayor is going to fix it/so there will be no throwaways on the street of human life/Awakened-up-dead, like me!”

While the open mic continued, outreach groups left Freedom Plaza around 8:30pm to distribute hats, gloves, and scarves to unhoused people around the District. Marcia Bernbuam and Kevin of People’s Fairness Coalition went to Franklin Park to bring those experiencing homelessness warm clothing.

“It’s a good feeling, reaching out and helping,” Kevin said. Kevin has been homeless off and on for two years, but has recently found housing through Rapid Rehousing. His experiences and his faith have drawn him to give back to the homeless community in the District.

“My sponsor said ‘in order to keep what you have, you gotta give it back,’” Kevin said.

At Franklin Park, Marcia and Kevin distributed all of the winter clothing items they brought with them. They also invited a dozen people back to the tent at Freedom Plaza, many of whom joined the event.

Around 10 p.m., members of the Foundry United Methodist Church sang Christmas Carols in the tent. Hot chocolate, cookies and donuts were available to everyone in attendance.

By 10:30pm, community members in the tent began to prepare to spend the night at Freedom Plaza. 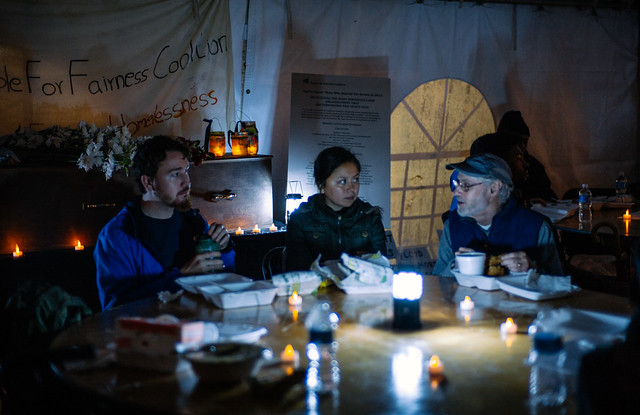