A trombone solo of “Amazing Grace” kicked off the small but high-spirited inaugural Walk 4 Recovery event on the National Mall. Rhonda Johnson, a self-described survivor of D.C.’s crack epidemic, organized the May 12 rally to celebrate recovery from substance abuse and bring hope to those struggling with it. May is Mental Health Month; another event is being planned for Recovery Month in October. Johnson said the walk is the only drug-awareness rally organized locally. 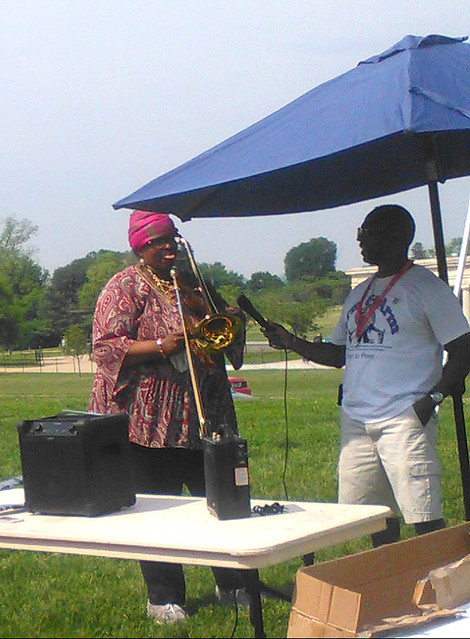 “I’m a native Washingtonian, and we had to make some noise,” she said with a laugh. “We’ve done something no other organizations have done. That’s got to be the game-changer.”

Wearing sunglasses, long wooden earrings forming the letters J-E-S-U-S, and a stylish strand of turquoise in her hair, Johnson stood on a hill with a megaphone and riled up the crowd of 40 next to the National Museum of African American History. Her voice echoed over the mall, turning heads of tourists at the Washington Monument behind her.

Having overcome depression and crack addiction, Johnson is now a peer counselor and proud grandmother. Her three grandbabies were among the handful of kids running with pinwheels and riding in wagons.

Johnson offered a microphone to survivors to share their stories, and to Kelvin Manurs, executive director of Arm and Arm, a community-based nonprofit offering peer support to returning citizens. Manurs led the group in prayer and passed out small American flags.

Except for a slight scar on his cheek, nothing about Manurs hinted at his former life as a drug dealer. He was also incarcerated and homeless for a time. Manurs said that love of his daughter and his wife, Cynthia, is what stopped him from committing suicide in prison and compelled him to go to his third bond hearing. Although he lost — a victim of Clinton’s “three strikes you’re out” policy — the Bible he saw on the mailbox when dropping in a letter to his daughter was his epiphany.

“I wanted to help people deal with the issues that lead to incarceration,” Manurs said.

Now he is a Virginia-certified peer specialist, recognized by the governor for his reentry work and awarded the title of “Recovery Champion” by the city of Alexandria. 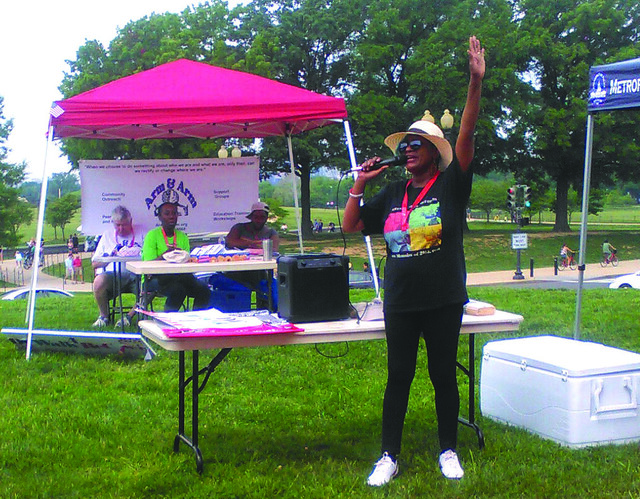 Rhonda Johnson, co-organizer of the event. Photo by Sarah Tascone

Mental-health and substance-use disorders often go hand-in-hand, and sufferers are statistically vulnerable to homelessness. Ten of the 25 cities surveyed by the U.S. Conference of Mayors in 2014 reported that “substance abuse and lack of needed services” was one of the top three causes of homelessness for individuals.

Veterans are highly susceptible to all three conditions. Arm and Arm works with ex-offenders and veterans, who are often one and the same, according to peer counselor John Davis, a Vietnam vet and former felon.

The reasons veterans become homeless are complicated. While substance abuse, usually alcohol, is a large factor, causes of homelessness tend to vary by age. Kids coming back from Afghanistan often go right from their parents’ house to boot camp and are not prepared for living on their own. For many Vietnam vets, according to Davis, it’s a choice.

“They have no intention of coming back to society because as far as they’re concerned, society abandoned them,” Davis said.

Substance abuse is a coping mechanism for dealing with trauma, he said, but it’s also a result of boredom with civilian life.

“It’s the military training. It’s ‘Do what you need to do to live.’”

Montgomery Recovery Services of Rockville was one of the groups conducting outreach at the rally. Program Coordinator Angela Caldwell said she had to laugh when people talked about the recent “opioid crisis,” because she has been dealing with it for 20 years. In fact, D.C.’s crack epidemic is misconstrued as having ended with the 1980s, she said, although it in fact merely decreased. 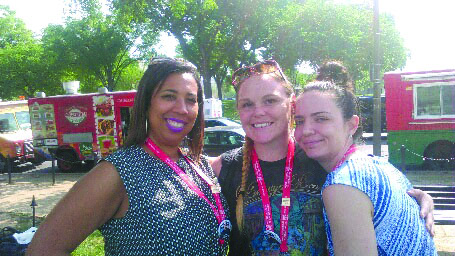 Because the opioid crisis affects young people and suburbanites, it has gained attention, Caldwell said.

“Unfortunately, that’s who is valued the most,” Caldwell said. “It’s like, ‘Wow, a kid on the lacrosse team died of an overdose.’ People realize addiction doesn’t discriminate.”

The contrast between treatment of mostly Black crack addicts, who were often incarcerated, with mostly White opiate addicts, who are being given funding for treatment, is not lost on either woman. But both show generosity of spirit.

“We gotta overlook that,” Johnson said.

Caldwell believes today’s more enlightened and compassionate view of addicts will extend to everyone, and she hopes young people are demanding addiction be viewed as a disease and not a moral failing.

At the mic, Amanda, who described herself as a “sex-trafficking survivor,” told her story of coming to D.C. at age 19, leaving her husband for a “clown” and subsequently becoming a homeless addict. She ended by announcing that her daughter had graduated from Gonzaga High School and was proudly serving her country.

“Just look at where I am now!” Amanda shouted. Everyone cheered.