As it enters a new year, Washington may be on the right track when it comes to helping homeless families. On December 23, Integrated Community Solutions in Partnership with Angels and Associates began to launch what the group is calling “the homeless eradication movement.”

Angels and Associates is a Department of Behavioral Health contractor through the Addictions Prevention and Recovery Administration that provides financial assistance to the most vulnerable people in the city struggling with skyrocketing rents. People like Monique Staley, who has been homeless since losing her job at a home health agency. Staley had been homeless with her three children, ages 12, 9 and 2, for two years. They lived at the Quality Inn on New York Avenue.

“I stayed with my cousin for a few months,” Staley said. “You’re really, like, kinda unsure of what’s going to happen.”

She felt their stay at the motel was a pleasant experience. “It hasn’t been as bad as other people’s experience has been.”

“I had to make sure I went on the coldest night,” she said. “If you don’t go on a hypothermia day you might get turned away. It was a little frustrating.” 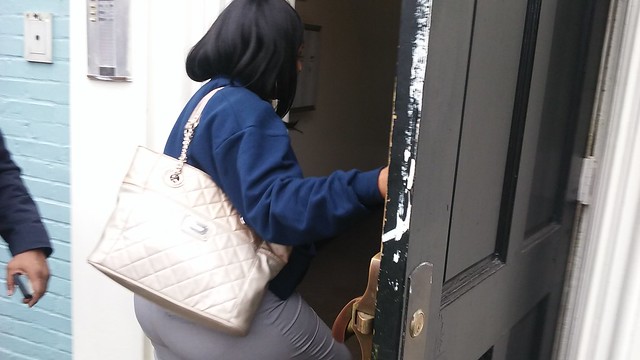 Working with Virginia Williams Family Resource Center to achieve placement was not a smooth experience. But overall, Staley said she couldn’t complain about having a clean place to go.

“I feel like the case managers are not doing a good job of communicating with you,” Staley said. “I made the best of it.”

She moved to Washington from her hometown of New York City in 2001, following the September 11 attacks.

“New York is very fast and if you can’t keep up, if you not doing the right thing, you could get into a lot of trouble,” Staley said.

After being placed, she found the Federal City Recovery Services’ job-readiness program.

“It helped me realize that so many people are going through the same thing I’m going through,” Staley said. “I’m so pleased words cannot describe how pleased I am. This has been a hard journey with my faith, but everything happens for a reason.”

People like Monique Staley can now find housing within the city. On December 23, Staley moved into a condominium through the rapid rehousing program. Ward 8 Councilmember LaRuby May was present to award Staley the keys to her new dwelling.

“I’m eager to learn about the program and celebrate Ms. Staley’s homeownership,” said May.
She also had a few things to say about where she wants to lead the ward in dealing with housing instability.

“I’m very focused on 801 [East men’s shelter],” said May, who claimed to be working with the Department of General Services to improve the grounds on the shelter’s campus.
May also criticized the organization contracted by the city to run the 801 East shelter, Catholic Charities.

“I saw them doing the floors and the bathrooms, but I didn’t see anyone that looked like my brothers. I had an issue with that,” said May in reference to a lack of diversity in the Catholic Charities employees she observed staffing the shelter.

“You need to be thinking about more than just making money off housing them.” she said. “We can’t forget our brothers in 801.”

May also said the unsheltered in her ward could benefit from a daytime service center and indicated that a neighborhood in Ward 8 has accepted one of the small family shelters that will be built in all wards to replace D.C. General family shelter. Ward 8 also does not have an urgent care clinic, she pointed out.

Some of May’s legislation in 2016 will create “social equity zones,” she announced, or areas where anyone can afford to live and thrive, regardless of skin color.

“The best way for anyone, white or black, to leave a legacy is property,” said May. “We would be able to protect our long-term residents.” 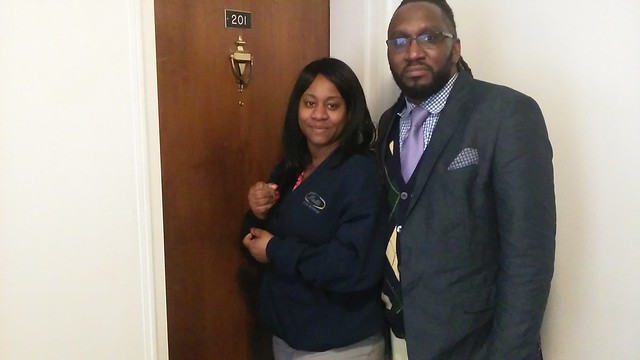 “I believe that some of the residents that live in Barry Farm will be able to come back as homeowners,” she said. “People in Barry Farm need to be able to trust this government. The fight isn’t about ‘I don’t want to leave,’ but about having a decent place to live.”

May also expressed that she is committed to eradicating homelessness. She said that people with money do not always treat people without money well unless they are forced to.

“What good is a job if you don’t have a safe place to go back home to?” said Williams. “Homelessness is a moral issue on every level. This is a homelessness eradication movement.”

Integrated Community Solutions in Partnership with Angels and Associates is looking to eradicate homelessness everywhere, according to Williams, starting right in Ward 8. His vision includes safe affordable housing, access to medical services, and more.

“I’m just a conduit, I try to mix and match all your needs,” Grant said. “That’s what this is about: you pour into other people’s lives and it comes back.”