The day that Martin Luther King Jr. Memorial Library closed, March 4, a group of at least a dozen homeless residents and their supporters gathered outside. Their goal was to draw attention to the reduction in options for the city’s homeless population during daytime hours, and what they viewed as a too-little, too-late response from the city.

D.C. Library began asking the community at large to help “imagine” the renovated library in early 2014. With ample time for planning, homeless advocates such as Eric Sheptock, who organized the rally, felt the Feb. 2, 2017 public announcement of the official closing date for the downtown library and the Department of Human Services’ interim service plan released less than a week before the closing date, was not enough.

Street Sense vendor and homeless advocate Reginald Black reported confusion on his first ride of the new shelter shuttle van route on the morning of March 7. The van arrived to a morning breakfast program after the program should have closed and did not include a downtown drop-off location on its route, according to Black. That evening, workers charged with executing the new plan demonstrated efforts to account for this confusion. At the Church of the Epiphany downtown pickup location, replacing MLK Library in the interim, United Planning Organization workers who operate the vans said they intended to pass by the former MLK Library pick-up stops on the off chance that uninformed clients were still lining up there. One UPO employee said the new plan is a work in progress and will be tweaked as needed to meet the community’s needs.

“We asked them to think about this for three years,” Black said in an interview with Street Sense. “We asked you to include us in your thinking process.” According to him, the library needs insight from the homeless community that it was simply not seeking leading up to this transition.

City officials agreed on that point during a debrief of the interim plan preceding a March 7 D.C. Interagency Council on Homelessness quarterly meeting.

“No excuses, communication could have been done better.” Kathy Harris said bluntly. Harris is the point person for DHS’ interim plan after being hired as the agency’s family services administrator in September. By the end of the debrief, brainstorming to create a peer outreach team to work with D.C. Public Library on connecting with homeless patrons had begun.

Kristy Greenwalt, director of the ICH, pointed out that the library is not a homeless services center.

“But it is a homeless center,” one meeting attendee interjected, describing the reality of the situation. With the closing of the library, the lack of public restrooms in the downtown area was again highlighted by the People for Fairness Coalition’s Downtown D.C. Public Restroom Committee. John McDermott, committee member and PFFC co-founder, said many homeless patrons of the library did not know where next to go. One man resorted to going behind a tree and was then ticketed $100.00 for public urination, according to McDermott.

Another PFFC representative said the Restroom Committee recommended further outreach to the Metropolitan Police Department to relax penalties for public urination and defecation while the library and its public restrooms are closed until other arrangements are in place. PFFC first proposed this to DHS at a February 14 ICH committee meeting and followed-up the next day with an e-mail outlining their recommendations, which included reaching out to the nearby Smithsonian National Portrait Gallery regarding relaxation of the bag size policy for homeless patrons seeking restrooms.

The March 7 ICH meeting was the first time MPD was made aware of this proposal, according to Communications Director Dustin Sternbeck. There are no plans to relax enforcement in this way.

Greenwalt went on to point out that DCPL simply provides services to all patrons, some of which are particularly useful to homeless patrons. Ultimately, the informal ICH group concluded what has previously been determined, that a downtown homeless services center is needed. This has been on the city’s agenda for several years, held up by the search for an adequate location. “It is our number one priority,” Harris said.

In the meantime, ICH will continue to work more closely to cement communications between DCPL and other agencies that help serve the homeless community.

Back at the MLK branch’s official closing, Sheptock said there was evidence of outreach from the city to make sure the library’s homeless daytime users knew their options going forward. Still, he was concerned that the shutdown was happening in the middle of a winter cold-spell when people without shelter can be at-risk of daytime hypothermia.

Saturday was very cold, so the city kept shelters open during the day, resulting in what one rally-goer described as a “ghost town” atmosphere in the library on its last afternoon. Others noted that some homeless people with knowledge of the shelter’s impending closure may have already moved on to a new daytime routine. Either way, it resulted in a slightly diminished turnout as rally-goers chanted, “Hey, man, what’s the plan? The homeless matter!” 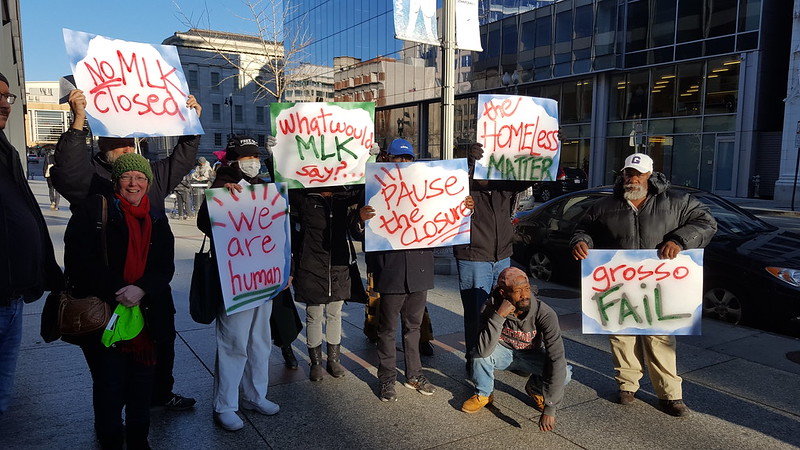 Protestors at the March 4 closing of MLK Library for a 3-year renovation. | Photo by Andrew Siddons

Sheptock said that the city was preparing branch libraries for an influx of homeless visitors and was providing sensitivity training to library staff, and that the Adams Place Day Center was installing more computers and extending hours in anticipation of greater use. The day center and Dorothy I. Height / Benning Neighborhood Library, both in Northeast Washington, will attempt to fill the void for homeless support services during the day. The full extent of this plan has been posted on the DHS website to address the interruption in services and ensure that the closing of the library does not mean a complete loss of services to the homeless community in the area. DHS says the interim plan will be replaced with a long-term strategy when it is developed.

For now, transportation will be provided from 6:30 a.m. to 8:00 p.m. Monday through Saturday, according to fliers circulated by DHS. The shuttle will begin its route at 801 East Men’s Shelter in Southeast and travel to the day center, where individuals can access laundry facilities, eat breakfast and connect with housing and employment opportunities. The third stop on the loop will be at the intersection of Minnesota Avenue and Benning Road NE, between The Department of Employment Services, Benning Neighborhood Library and a Unity Health Care clinic.  The final stop on the loop will be at Church of the Epiphany in downtown D.C. This stop is designated as a drop-off and pick-up location, in place of MLK Library, for people who want to be in the downtown area during the day. The church does not offer public restrooms and water fountains as DHS previously claimed.

Catherine Manhardt from Church of the Epiphany said though the church is unable to provide any new services in the wake of the library closing, such as restroom access, Epiphany will continue to do what they have been doing for the homeless community for many years: keeping the sanctuary open from 10 a.m. – 3 p.m. daily and offering community programming on scheduled days, such as the Street Church group that gathers on Tuesdays for worship and lunch at Franklin Park. Other programs include art therapy, bible study and Sunday breakfast.

The church agreed to be a stop on the transit loop on a trial bases, but Manhardt said other than that, they do not have the staff or the resources to do more in the wake of the library closing. DHS has listed other churches in the downtown area that will continue to provide support to D.C. residents experiencing homelessness. New York Avenue Presbyterian Church, Metropolitan African Methodist Episcopal Church and Foundry United Methodist Church, are all places where individuals have access to public restrooms.

Catholic Charities confirmed it will continue to provide meals on Wednesday evening, across street from the now closed library. Their offices are also open Monday through Friday 10 a.m. to 4:30 p.m. to assist in connecting homeless individuals with other resources. So Others May Eat will continue providing meals seven days a week, twice a day.

For more detailed information on DHS’s interim transportation and services plan visit dhs.dc.gov. The Shelter Hotline can also be contacted for updated information at (202) 399-7093.

While the city will provide transportation to those locations from city shelters, some members of the homeless community view the lack of daytime options downtown as evidence that the city wants people without homes to be relegated to the periphery. “Sooner or later we’ll be in Baltimore,” Sheptock said to emphasize the point.

This article has been updated to include new information regarding community feedback to DHS on public restroom access and how that input was followed-up on by the department.