It is 10:30 a.m. on a Thursday at the NoMa encampments, several communities of people living in tents at the K, M, and L Street underpasses in Northeast D.C. The roar of a Lamborghini echoes down First Street NE and pedestrians hurry by during the morning rush hour as encamped residents break down their tents and help each other gather any belongings before the garbage trucks come. Most everyone seems to know the drill, this happens almost every two weeks.

As the trucks park and the workers step out, it is straight to business. In silence, the workers pick up and dispose of anything within the cleanup zone, which is marked off by caution tape. Police officers stand by, vigilant yet similarly quiet.

According to the city’s encampment protocol, the District aims to “assist these individuals to better stabilize their living conditions by conducting outreach and offering certain support services, including temporary shelter and permanent housing placements when they are available, applicable, and the individual is interested in receiving these services.

Yet residents say the only support system they truly have is each other. 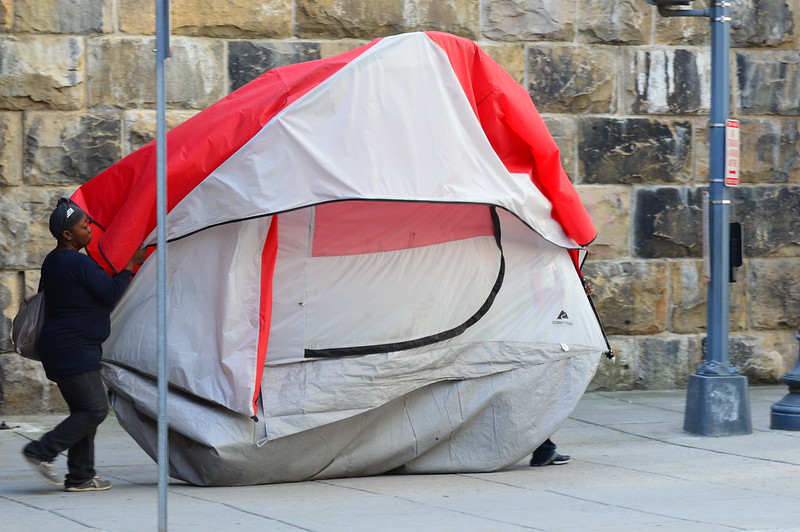 Two people living on M Street NE move their tent ahead of the cleanup. Photo by Sean McBride

“The last cleanup, they removed all of our s*** and just came and swept; they didn’t do no power washing, none of that,” said one resident, who gave his name as Micheal and was helping others collect their belongings. “They talk about the urine smell, but they had a porta-potty out here for three months and didn’t do no maintenance.”

[Read more: What is so complicated about homeless encampments in the District?]

Deputy Mayor for Health and Human Services Communications Director Sward Tondoneh said the NoMa Business Improvement District, which provides the power washing services, does not have enough capacity in a power washer to wash all three streets. “We do power wash when we’re in NoMa, it just might not always be all three underpasses,’’ she said. “One of the issues they run into is that people return so quickly after we do our cleanups they don’t even have the ability to do all the streets. They’ll run out of water in the tanks, when they go back to fill the water up and come back, they can’t power wash any longer because residents have already moved all their belongings back. We are working through some other options both for NoMa and citywide to be able to increase the amount of power washing we’re doing.” As for the porta-potties, Tondoneh said there are no plans currently to implement them near encampments.

Residents of the encampments have to deal with extreme weather conditions as well, including occasional temperatures upwards of 100 degrees and, soon enough, cold weather conditions that can lead to health issues such as hypothermia. 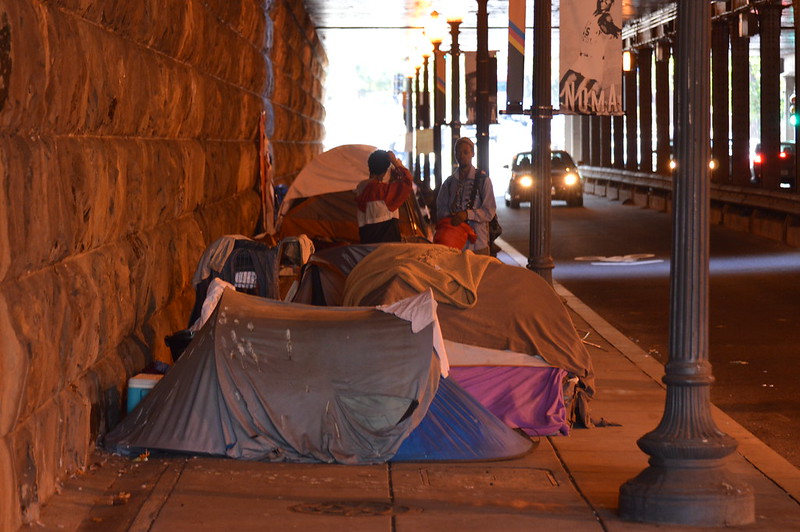 One solution for encampment residents would be to go to a shelter, which would provide safety as well as further assistance towards permanent housing.

But several residents who had stayed in D.C. shelters said they are now purposefully avoiding them because of substandard conditions, such as bed bugs, lice and scabies infestations, off-putting odors, violence, and theft.

[Read more: The District is overhauling its shelter system, starting with family facilities]

“A lot of shelters are very, very dirty, leading to a lot of fights, people stealing stuff, and they don’t have a lot of storage space,” said a former shelter resident who gave his name as Jeff and said he has been to multiple shelters in D.C. He said the city’s family shelters — which he has been in with his wife and son — are “way better” than single shelters “because they have staff that help you find resources, it’s cleaner [and there are] more services for permanent residency.” 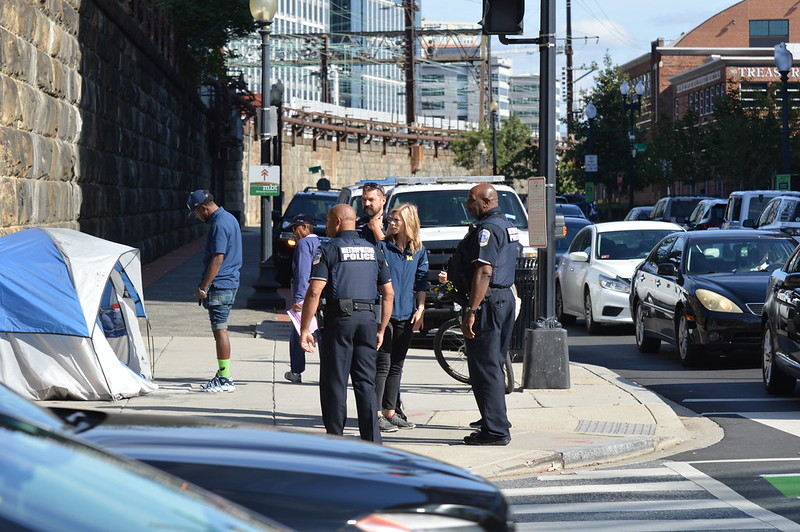 Another camp resident criticized the low-barrier shelter hours, 7 p.m. – 9 a.m., saying they require the need for multiple trips across town to and from the shelter.“I don’t approve of them,” said Ray, a NoMa encampment resident who only gave his first name. “That’s why we out here, because you want us to come in there but you don’t help us out.”

In response to these complaints, Tondoneh said the administration is putting a lot of capital dollars toward the redevelopment of the low-barrier shelter system. “We are in the process right now of building a new shelter at 801 East,” she said. “We went through a really aggressive engagement process around the development of that shelter, doing focus groups, different meetings, town halls, and even outreach … in encampments.” They explicitly asked unsheltered residents what would need to change in city shelters to make them a viable option, according to Tondoneh.

One Department of Public Works employee working the clean up that day said local officials are at fault for the encampments’ existence. The employee’s name has been withheld for privacy. “The city could do more than what they are doing for these homeless people,’’ they said. “It’s a lot of them out here that wouldn’t be here — believe you, me — if they had someplace to go.”