The number of children in DC foster care is going down. This is how one unique organization helps that trend.

Several years ago, a single mother faced an impossible choice while staying in a shelter. She had to go to the hospital but had no friends or family to watch her two daughters.

Out of options, she picked up the phone and did something unexpected –– she called Child Protective Services on herself. Her children were taken into protective custody as wards of the District.

The woman was eventually reunited with her kids through an initiative called DC127. The project’s community-based support of families has kept 95% of families out of foster care within a month of services since early 2015.

Prevention programs — such as DC127 — are one of the main reasons for this decline and the push for it to continue. The report said that these programs have gained greater support after President Donald Trump signed the Family First Prevention Services Act in September, which provides these programs with federal funding.

DC127 began as a project to provide loving foster homes through members of District Church, a congregation co-founded lead pastor Aaron Graham in 2010. The foster care program branched out as its own nonprofit in 2015 and the prevention program was started when they were approached to create the initiative by Brenda Donald at Child and Family Services Agency. CFSA did not respond to requests for comment.

DC127 is the only prevention program in the area that provides both temporary hosting, where parents sign up to house children in need for extended periods of time, and a support system of volunteers for birth parents. There are other programs that provide one or the other, said Chelsea Geyer, the executive director of DC127.

It also provides host services to children of all ages while some other agencies have a cutoff.

“That’s been a real signature program of ours,” said Amy Graham, who co-founded the organization alongside her husband and Geyer. “There’s no other program like it.”

The Grahams have two young adoptive children and have fostered a teenager. They said their Christian faith encouraged them to undergo the process of both fostering and adopting.

“In heaven, we’re all adopted, there are no orphans in heaven,” said Aaron Graham, Amy’s husband. “[So] if there are no kids without a mother and father in heaven, then there shouldn’t be [any] here on Earth, especially in our nation’s capital with as many resources as we have.”

This faith, Geyer added, makes DC127 unique because it recruits volunteers from churches.

“Churches and people that go to churches already have the belief that they should love their neighbors,” she said. “We’re able to give them the tools to carry out loving their neighbor in radical ways.”

Thus, Geyer said, the people the organization serves are provided with compassionate people who are immersed in helping others. Geyer grew up with three foster siblings herself and jumped at the chance to support DC127’s mission.

“We are providing people with volunteers that hopefully go past volunteership and are able to support them in true friendship,” she said.

Jessica Castro first got involved with DC127 after she and her husband moved to D.C. and started attending  District Church. They serve as a host home.

They are currently hosting a 2–year–old boy for a young mother that is aging out of foster care. On Friday afternoons Castro’s husband picks the boy up; they spend the weekend together and drive him home on Sunday night,  giving the mother, who takes the children everywhere, a break so she could focus on other needs.

The Castros have hosted once before ––  two toddler boys on weekends over the span of four months. They keep in touch with the first parent even though their volunteer time has ended, taking the kids for occasional weekends when needed and attending the kids’ birthday party.

“It’s rewarding to be able to help someone out, whatever they’re struggling with,” Castro said.

Providing stability for birth families is the best way to help prevent foster care, according to Margie Chalofsky, executive director of the Foster and Adoptive Parent Advocacy Center.

“Parenting is very hard,” Chalofsky wrote in an email. “Parents need not only a curriculum to improve their skills, but the support from others to fill their own emotional ‘gas tank’ so they have enough strength to provide stable homes for their children.”

She wrote that even though these numbers have decreased, providing stable homes remains a critical need.

To decrease the number of children going into foster care, “we have to commit to increasing the stability of [children] who are not coming in through comprehensive, sustainable, wraparound support,” Chalofsky wrote in an email. “By focusing on the parents as early as possible, we serve as the first line of prevention for the entire family.”

Sarah Bell, another host parent recruited from District Church, has four kids of her own. She has hosted eight children over the last four years, both in respite and full time capacity, for months in some cases and years in others.

Bell’s family also spends holidays with past families they have served.

“I felt like it was a clear call [from God] not just in our family but those in the greater faith community,” she said. “One of those ways we feel called is opening up our home.” 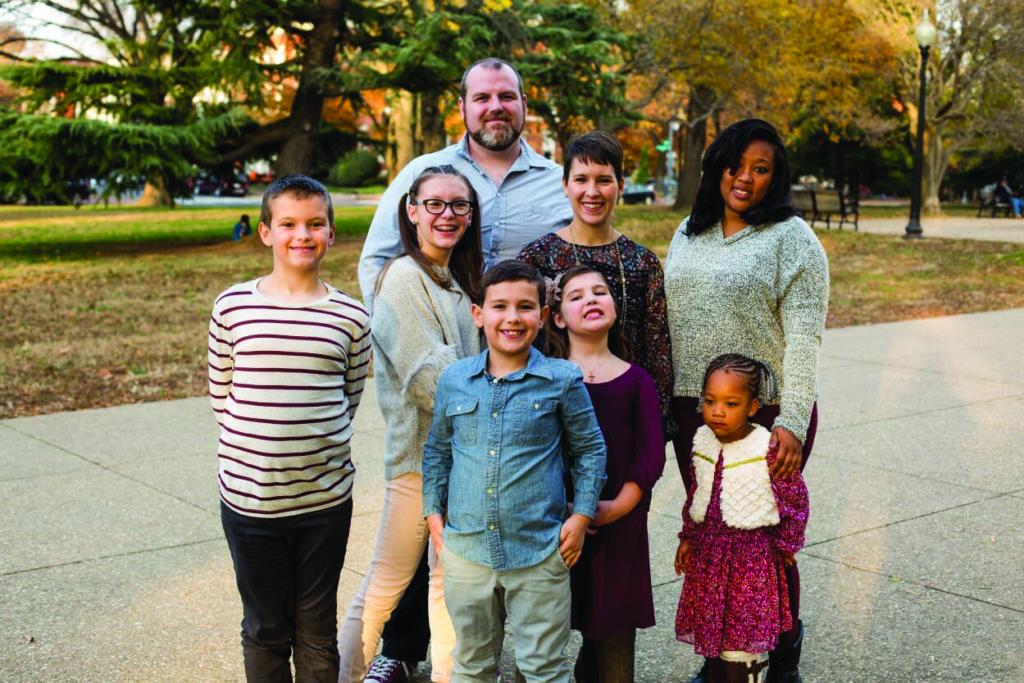 The Bell Family stands with the mother and child they served through the Communities for Families program. Photo courtesy of Sarah Bell

Both Castro and Bell said they would recommend hosting to others.

“Anyone who has a heart for children, a heart for service, for helping families and being engaged in the communities, if you have that type of desire, then you can be equipped to do it,” Castro said.

For Bell, hosting helps her understand those who live different lives than her own.

“My eyes have been opened by being involved in the lives of these families and these children, to broken systems within my own community,” Bell said. “Everybody has something to give.”