Blessings by the Bowl

Michael Bennett pushes a shopping cart laden with boxes of Cocoa Puffs and Fruit Loops down Massachusetts Ave. A crowd of homeless people follows close behind him, dragging their bags. It’s the second time the security guards outside of the Union Station Post Office have asked him to relocate, and he’s hoping the third time will be the charm.

“This will do,” he says, as he parks his cart several yards down from the guards. The crowd gathers around him as he unloads cereal and milk and juice by the gallon onto the cement curb, which for the next couple hours will function as a table.

Bennett has been running his own feeding and supply program for the homeless for the past ten months. Every Sunday morning, he pushes a shopping cart full of food and supplies from his house to Union Station, about a half hour walk. It operates as his portable closet and pantry to whoever stops by, stocked with everything from sneakers and razors to bagged bologna sandwiches. 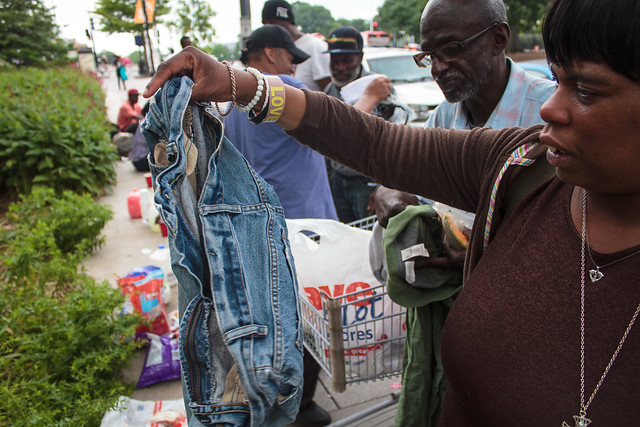 But it hasn’t always been an easy life for Bennett. It used to be him out there on the streets, living under a bridge in New York City and sleeping on a mattress surrounded by a cardboard box. In 1992 he was able to get out of his homelessness, which he calls a blessing.

“I didn’t want to live like that anymore,” says Bennett. “I left and I didn’t go back.”

Bennett’s personal experience with homelessness has given him insight into what the homeless need. And he has discovered that sometimes all you crave is something comforting, like a big bowl of something nostalgic from your childhood. He believes this is cereal.

“Everyone likes cereal because it is something we have grown up on,” says Bennett. “A lot of the shelters don’t offer it.”

Bennett finishes laying out the spread of milk and cereal ,and the area soon turns into a whirlwind of homeless people pouring themselves bowls of Fruit Loops and cups of juice. They sit on the curb, happily munching on spoonfuls of cereal in Styrofoam bowls. As they eat, Bennett starts to hand out supplies.

A woman approaches him and asks for a razor.

“I was saving this pink one just for you,” he says as he rummages through his cart. She looks delighted.

Bennett then notices a man sitting off to the right of him whose sneakers are tattered and falling apart. He pulls out a pair of brand new neon green sneakers from a bag and hands them to the man. He slips them on his feet. It’s a perfect fit.

Regulars have come to know Bennett and rely on his Sunday breakfast. 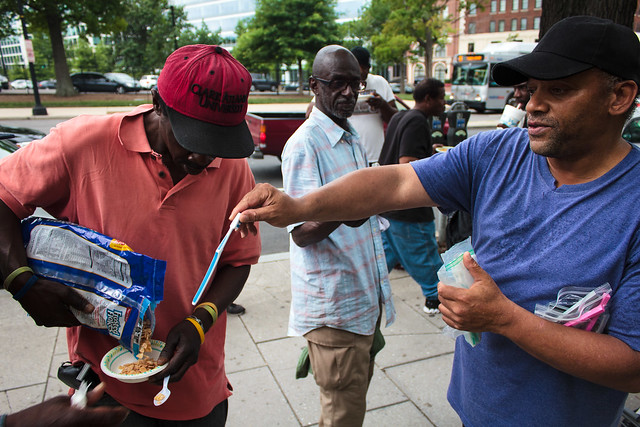 “This guy is a blessing to the homeless,” says a man by the name of Terry ,pointing to Bennett . “He does us a fantastic service.”

After the first half hour, a majority of the crowd has dissipated, though a few folks linger and talk. By the end, Bennett tries to get them to grab more sandwiches or have another helping of cereal.

“When I run out of something, that’s good. I don’t want to take this stuff home with me,”he says.

Bennett finances all of his own food and supplies, which he often finds challenging on top of paying rent.

Finally, everyone has been fed. All that remains of his morning supplies are a couple of fallen Fruit Loops, floating in a puddle of milk on the curb.

Bennett knows he is doing the right thing.

“This is what I am called to do in my life, so I know it will work out,” says Bennett. 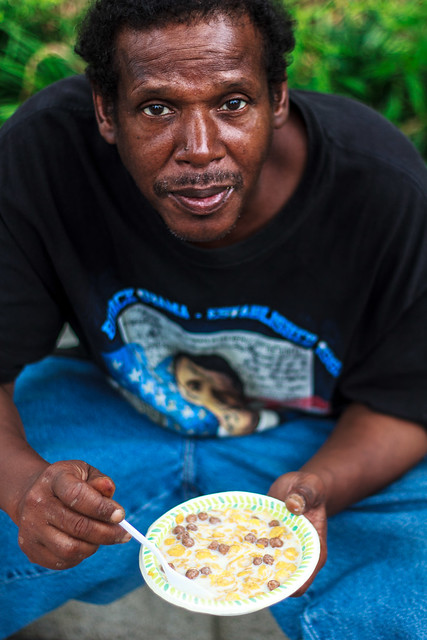