After a night sleeping on Freedom Plaza’s cold pavement, homeless advocates marched to the Wilson Building to present their concerns and recommendations for the next budget to city councilmembers.

Ward 2 Councilmember Jack Evans arrived to his parking space in front of the building as the group crossed the street. He was quickly approached as he opened his car door. The advocates launched into their speech to convince Evans to support several financial priorities they outlined, which included fully-funding the city’s 5-year plan to end homelessness.

“Your ward has the most homeless people unsheltered in it,” said Jesse Rabinowitz, an advocacy specialist at Miriam’s Kitchen.

“There’s a reason for that, it’s the downtown ward,” Evans replied.

Evans agreed with the advocates that it is important to help everyone get off the street, and noted that he supported the mayor’s Pledge to End Homelessness. He suggested the group speak to Chairman Phil Mendelson. 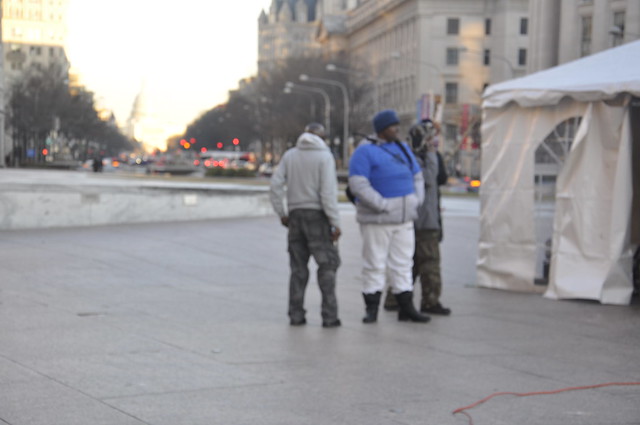 People for Fairness advocates setup their tent across from the Wilson Building., | Photo by Gwynette Smith

After Evans was given a single rose and informational flyers, the group moved on to meet Mendelson. They arrived at the Wilson Building when it opened at 9 a.m. and were joined inside by Michael Stoops, a longtime advocate and former director of community organizing at National Coalition for the Homeless. Stoops was assisted in a wheelchair by social worker Julie Turner to attend every meeting with councilmembers that day.

Inside the building, Ward 5 Councilmember Kenyan McDuffie and Chairman Mendelson stood together in Mendelson’s office and listened to the group’s suggestions, which included investing $8.5 million for 535 permanent supportive housing (PSH) units, investing $5.2 million for 425 targeted affordable housing (TAH) units; investing $3.7 million in 343 rapid re-housing (RRH) units for individuals; and support for adding homelessness as a protected class to the D.C. Human Rights Act of 1977.

Robert Warren of the People for Fairness Coalition told Mendelson and McDuffie about a 70-something-year-old man who had passed away living on the street. Warren lamented the horror of an older man dying on the in those conditions, to which McDuffie said “It doesn’t matter how old you are, no one should die living on the street.”

Both men were sympathetic to the cause, but neither pledged to support the group’s suggestions. “It’s more than just funding,” Mendelson said, “it’s about improvement and how we spend the money.”

The group then visited Councilmember Anita Bonds’ office. The councilmember was not in, but her staff met with the advocates, who spoke both about their budget suggestions as well as the importance of adding homelessness as a protected class. One staff member for Bonds asked why homelessness should be considered a human rights issue if the advocates wished to see homelessness as a temporary, fleeting situation. “Until we can talk about homelessness, we have to protect people who don’t have a voice,” Townsend said, “let’s protect people while they’re walking through this walk. This Act helps people while we’re trying to find money in the budget [for housing].” Bonds’s staff thanked the group for visiting and took a rose and flyers to pass on to Councilmember Bonds. The last stop for the group ended up being Councilmember David Grosso’s office, which overlooks Freedom Plaza. “Let’s get you somewhere to sit down,” Grosso said as he invited the entire group to come inside. He had a copy of Street Sense on his lounge coffee table, which excited the group. The councilmember listened to their requests and read over the list of 46 people who passed away while unhoused. He shook his head at the number.

The group informed Grosso of the importance of adding homelessness as a protected class under the Human Rights Act.

“You shouldn’t have to be arrested for trying to use a restroom,” Reggie Black of the People for Fairness Coalition said, “that’s not humane.”

“Why is it we haven’t amended the Human Rights Amendment?Let’s work on this,” Grosso said to his staff, who nodded in agreement. He said the group could count on him to support the $8.5 million request for permanent supporting housing funds as well, which prompted advocates to break into applause.

Grosso was the only councilmember the group spoke to that pledged support to their budget and legislative recommendations. The group did not speak to any other councilmembers during the morning visit. “We’re on a time crunch,” Albert Townsend said as he boarded an elevator to the building’s lobby, “We have to get organized for the march.”

After leaving the Wilson Building, the group processed to New York Avenue Presbyterian Church for the daytime memorial service, carrying signs displaying the names of the 46 people from D.C.’s homeless community who passed away in 2016.