Paulette Matthews, one of D.C.’s more than 20,000 residents who live in public housing, often testifies at the D.C. Housing Authority’s  Board of Commissioners meetings, and thus is the person many other residents turn to when they face issues ranging from rat infestations to mold to holes in the floor. When Matthews reports these issues to DCHA, she usually does not get a response. And when she does hear back about a complaint, it is often too late.

Matthews said she has been trying to get her fence fixed for over a year, and was told it would be done by February 2020. When she needed to get her locks changed during an emergency, it took over a week. And there is a rat infestation in her building that has not been addressed. Often maintenance will come to fix something months after it is reported and enter her living space without her knowledge. She constantly feels unsafe in public housing.

“[DCHA] doesn’t have the manpower to get this work done,” Matthews said. “We’re going to keep seeing what we are seeing, which is needed repairs that are backlogged and little things turning into big problems.”

“It is a small victory in a sense that there has been money allocated to public housing, but there is not nearly enough to meet the needs that are out there, especially during a pandemic that has perpetuated the health issues that many people in public housing were already living with,” said Daniel del Pielago of the nonprofit Empower D.C., which organizes low-income communities.

“Thanks to the actions of the council and the administration in the creation of the rehabilitation and maintenance fund, DCHA has received an infusion of capital over the past three years that has made a significant impact, ” Garret said during an oversight hearing this year.

He noted that HUD has made it clear additional federal capital funds are not likely to be provided to address the growing need. The $40 million of local funds available for rehabilitation and maintenance this year was expected to go toward unit renovations, “site work” and roof replacement, and other upgrades.

“While these funds are a tremendous resource to address immediate challenges, the long-term of the properties will still require investment,” Garrett said. A slide presented by DCHA Director Tyrone Garrett at the March 4 Committee on Housing and Neighborhood Revitalization oversight hearing. Courtesy of DCCouncil.us

“With such a large sum, it may feel as though this endeavor is impossible to achieve. I cannot sit here to say that we have all the answers today, but what I can tell you is that all signs indicate that funding for public housing is going to continue to decline,” Garret said. “Maintaining our housing stock, as it continues to age, requires more and more funding.”

Poor conditions like those described by Matthews are all too common in D.C.’s public housing, according to Stephanie Sneed, the executive director of Fair Budget Coalition, a group that advocates for budget and public policy initiatives in the District. She said lead poisoning and mold are other major issues as well, and many residents have had to go to the hospital because of environmental hazards in their living spaces.

DCHA is aware of these hazards in their properties and the need to fix them. In addition to the issues mentioned by Matthews and Sneed, the housing authority’s “transformation plan” for their properties identified nonfunctioning smoke and carbon monoxide detectors as well as deteriorating pipes and electric panels.

“It’s an incredibly dangerous situation that D.C. residents are forced to be in right now,” Sneed said. “Dedicated funding for public housing repairs is a must.”

These issues are only exacerbated during the COVID-19 global pandemic when residents are forced to quarantine, according to del Pielago.

“By the D.C. Housing authority’s own admission, a majority of their housing is uninhabitable,” del Pielago said. “Imagine having to quarantine in an apartment or a house that is in a horrible condition. The only other option is going outside where you risk contracting this virus.” 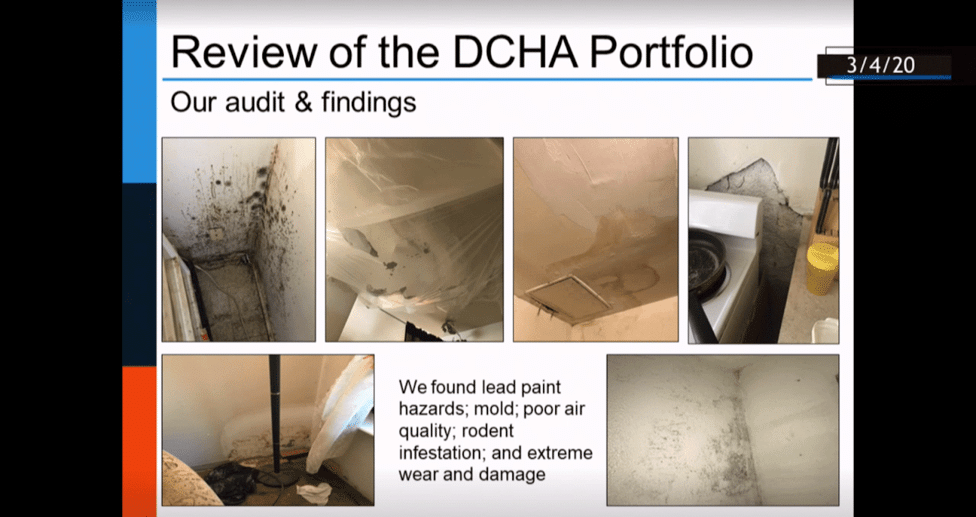 A slide presented by DCHA Director Tyrone Garrett at the March 4 Committee on Housing and Neighborhood Revitalization oversight hearing. Courtesy of DCCouncil.us

DCHA Director Tyrone Garrett testified in March that 14 public housing properties had been identified as in “extremely urgent condition” and could soon present physical and environmental hazards to the families that live there if not addressed. According to a slide displayed during Garrett’s testimony, those 14 properties account for 2,603 units that house 5,047 residents.

A recurring fund for public housing is not only necessary to make existing spaces habitable. It could allow for investment in new projects if DCHA has a reliable source of income to fall back on, according to del Pielago. He stressed that any new projects the housing authority invests in need to be resident-led.

When DCHA moves forward with new projects that are not resident-led, this can be actively harmful to residents, del Pielago and Sneed agreed. For example, critics have said the District government is overriding residents’ concerns at the Park Morton public housing development that was scheduled to be torn down and renovated while its residents were housed in a new nearby building. While opposition from neighbors has delayed construction of the replacement housing, D.C. has continued to press on with the renovation plans, forcing some residents to accept housing vouchers to move elsewhere in the city. Ward 1 Councilmember Brianne Nadeau pushed for the project to be put on an “accelerated timeline” this week. She tweeted that there is now a hearing scheduled for Sept. 17, though it is not yet posted on the council’s calendar.

Advocates have asked for funding to be shifted to public housing from the extension of the D.C. streetcar from H Street NE to the Benning Road Metro station. At-large Councilmember Robert White tried to pass a motion to shift $35 million from this project to public housing repairs during the first vote on the budget but the motion did not pass.

“This gives us some real insight into the values that are guiding the budget and guiding the government in general where the priorities are out of skew and the streetcar is being valued over the lives of people who need help,” del Pielago said. “We believe that people’s lives, especially Black lives and public housing residents’ lives, should have more weight.”

Public housing has historically been funded at the federal level. But there has been massive disinvestment in recent decades, leaving almost no money for repairs. The U.S. Department of Housing and Urban Developments’ budget authority went from $83 billion to a little over $18 billion between 1978 and 1983, according to a fact sheet published by the Western Regional Advocacy Project. It has continued to decrease by 2% each year. Advocates are increasingly focusing on local funding sources to make up the difference.

Local funding is going to be needed even more in the upcoming year as the federal government continues to decrease funding for public housing. President Donald Trump announced in February that he would cut funding for the Department of Housing and Urban Development by $8.6 billion, or 15%, in the FY 2021 budget. This would eliminate all funding for public housing capital repairs, according to the National Low-Income Housing Coalition. The House and Senate appropriations committees are still marking up the president’s proposal.

D.C. Council’s final budget vote was scheduled to take place yesterday but was deferred by Chairman Phil Mendelson until tomorrow.

Mendelson walked away from a 3% tax on advertising he proposed and the council was asked to determine an additional $18 million in cuts, behind closed doors and prior to the public legislative meeting, to balance the budget.

This article previously stated that the Mayor’s proposed budget allocated $25 million for public housing repairs for Fiscal Year 2022. That figure has been corrected to $15 million.