Behind the Story: Meeting a Superhero

I have the greatest respect and admiration for the Honorable John Lewis. He has wisdom, experience, vision and resolve. He is my hero because of his humility, strength and ability to stand tall — not just in verbiage and lore, but in everyday life. He serves us all as a living, stellar example of achievement on behalf of all people through, peaceful dialogue and nonviolence.

It was about to be one of the biggest days of my life.

I’ve met foreign dignitaries, great musicians, entertainers, other congressmen, street legends, people of great wealth and knowledge. I have even met icons. But to have a conversation with a civil rights icon? To have the honor of photo documenting the event? Me?

Of course, it was not the first time I’d seen him in person. I was a gopher college intern during a D.C. march for the missing children of Atlanta. I got relatively close and was even a “parade marshal.” But that was over 30 years ago, a blur… And nothing like this.

Butterflies galore. I knew going in that this man of modest stature is a GIANT among men and has proven the heart of a lion. 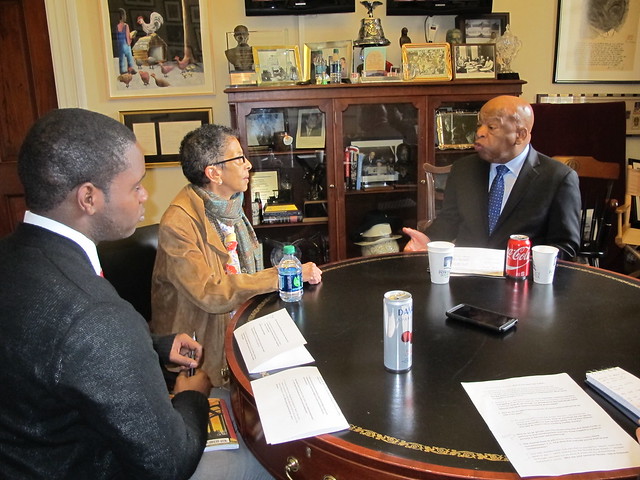 This living legend was about to further the impact that he had made upon my life. Impact that includes nearly every right and privilege I have enjoyed as a Black male in America. I knew that because of him and the other proud men with whom he traveled — names like Lowery, Randolph, Young, Jackson, Wilkins, Rustin, Gregory, Farmer, Abernathy and King — I could be a man of substance and dignity. A contributor to my society, my community.

This was my chance to let him know on a personal man-to-legend level, as it were, just how much his work means to me. It changed and continues to change our country for the better.

He has received all kinds of honors, so he has heard it all before, I’m sure. It is probably routine for him. But for me? To meet and shake the hand of a man who took a brutal beating so that I might not have to… A man who has dedicated his life to the service of his, no, OUR country? A man who even today is berated by the ignorant minds of this land while toiling unselfishly for the greater good of humanity.

Huge is too small a term for what this meant to me. John Lewis, and me?