Street Sense Vendor Anthony Crawford has been getting his customers ready for Valentine’s Day. With the help of Second Story Cards, a startup project run by his longtime friend Reed Sandridge, Crawford has been making cards for the occasion. The final products have designs on the front ranging from a simple stamp of a heart to a catchy slogan about love.

When he doesn’t have a specific holiday in mind, Crawford designs cards with funny slogans for a variety of life events. The front of one of his recovery cards reads, “Feel better. If the meds don’t work, polish off a bucket of fried chicken and a half gallon of ice cream.” 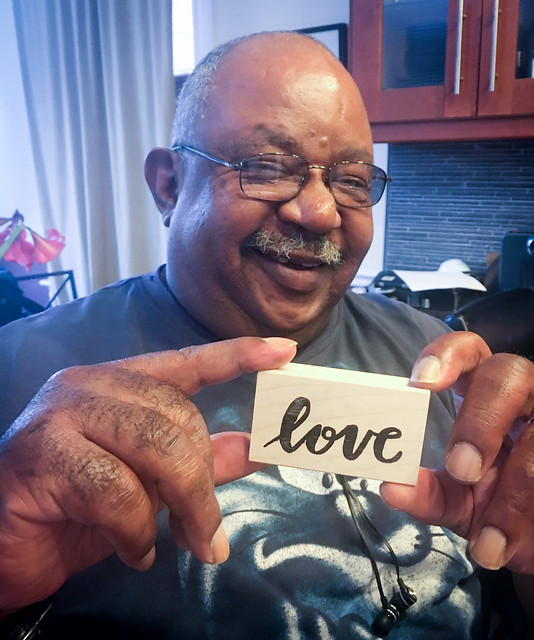 In terms of his inspiration for phrases like these, Crawford said that he looks for the comical aspects in everything around him. Finding reasons to laugh has always been an essential part of dealing with the challenges he has faced. “I can think of a whole lot of reasons to cry. But to laugh, it takes a good heart to do that,” he said.

Crawford began making cards around New Year’s, shortly after Sandridge started the project. He enjoys the process of making them. “It shows you the creativity you have,” he said. The cards are produced primarily through embossing and stamping, both of which demand a steady hand and intense focus. The slightest movement of the paper can cause smearing. “They don’t always come out perfectly, which I think is the beauty of Anthony and other people making the cards…they’re perfectly imperfect,” said Sandridge. Second Story Cards currently operates out of his apartment. “It’s really in the startup phase of the process,” Sandridge said. He is working on setting up a website where customers can purchase cards online.

Since long before he began card-making, Anthony has been selling Street Sense papers on the corner of 19th and M St in Northwest D.C. For 13 years, Crawford has witnessed the continual flow of people and their lives on those streets. “I see them come, and I see them go,” he said. His established position there has gained him loyal customers for Street Sense papers, and now his cards. “He’s the Mayor of 19th and M,” joked Sandridge. “He’s there everyday on the corner, so people know him.”

It was on this corner that Sandridge and Crawford first met in 2009. Sandridge was in the first months of his “Year of Giving,” during which he gave 10 dollars to someone he passed on the street everyday. Anthony was one of the recipients, and from their initial encounter a lasting friendship formed. The pair met frequently for coffee, and in 2013, Sandridge helped Anthony navigate the complicated process of finding housing. “I almost gave up on it. It wasn’t moving fast enough for me. Reed kept encouraging me to hang in there, hang in there, hang in there,” Anthony said. This was how, after 20 years of homelessness, Anthony found a place to call home in 2013. 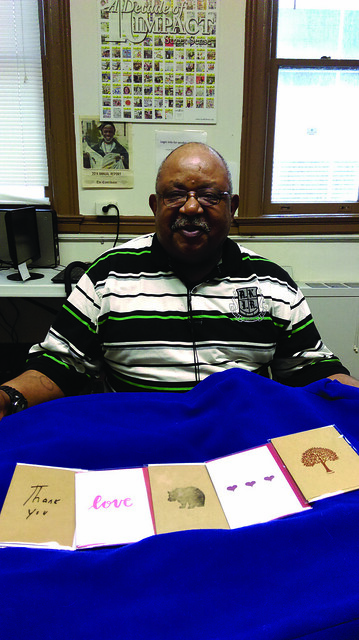 Sandridge’s idea to start Second Story Cards grew out of his, “passion for letter writing” and his recurring collaboration with men and women experiencing homelessness or extreme poverty. Sandridge has observed that people faced with these circumstances often lose their self-esteem and confidence. He views card-making as a form of entrepreneurship that can help people gain this back while also earning an income. “Creating something is very powerful,” Sandridge said. “When someone purchases one of Anthony’s cards, that means something. He’s able to think, ‘this is something I created and you want it.’ This is something he can feel proud of.”

Anthony agreed. A short paragraph about Anthony’s life story is printed on the back of every card he makes, and seeing people read this when they receive a card makes him happy. “I have made a step up in life. I don’t live on the street anymore. I’m putting myself back together, like I should,” Anthony said. The creativity involved with card-making and the rewards of seeing the final product brings much-needed joy to his life. Last year, Anthony suffered two strokes. “It wasn’t fun. It took something away from me. And this way, I’m gaining it back,” Crawford said. 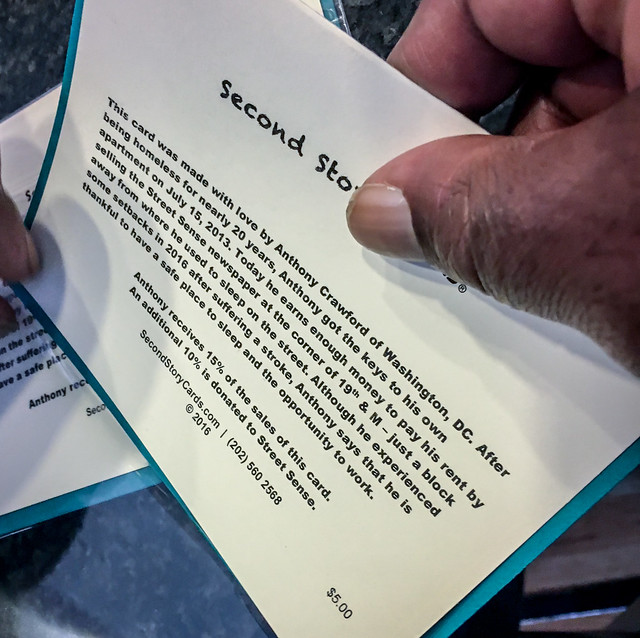