College is expensive. Financial aid and merit awards can cover most of the cost of tuition and housing for qualifying students. However, expenses such as food, transportation, books, and clothing can add up quickly — especially if a student comes from a low-income household.

At American University, one resource that addresses this issue is The Market, a food pantry for students that is run by student volunteers in partnership with the Office of Campus Life, AHealthyU, and the Health Promotion and Advocacy Center. It is located in the basement of a residence hall, where it is easy to access but discreet enough to protect students’ privacy. Users can access it 18 hours a day with their student key card.

The Market was created after a student was unable to consistently afford food and went to the Office of Campus Life seeking a solution, according to Tony Hollinger, who oversees The Market. This student helped to create a survey looking into food insecurity on AU’s campus and found that in 2016, 44 percent of students went hungry once a semester, 18 percent went hungry three to four times a semester, and 59 percent of students knew someone who did not have enough food. By the 2017-2018 academic year, The Market was up and running.

The food pantry at AU was largely inspired by The Store, a student-run pantry at The George Washington University that was formed about a year before The Market. Like The Store, The Market does not employ a full-time staff. “It’s very much based on an honor system… it really is about students being mindful of each other,” Hollinger said. When leaving The Market, users are simply expected to report what items they are taking on a sign-out sheet. Hollinger says that the system is effective, and he has never seen a situation where a student has taken significantly more than they needed.

To access The Market, students do not need proof of their financial situation and must only fill out a short form online with their university ID number and email address. According to Hollinger, “we don’t have any qualifying criteria… for the privacy of the users, we don’t know what their personal circumstances are.” 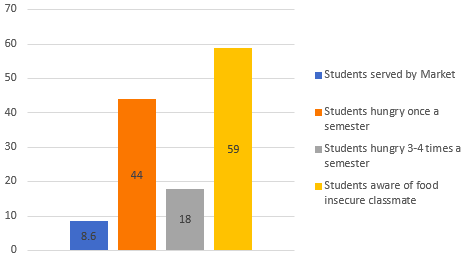 Much of the food at The Market comes from Capital Area Food Bank, which has locations in D.C. and Virginia. Other groups on campus also collect donations and, at the end of each semester, money that is left over in student meal plans also goes towards food for The Market. The Market stocks mostly non-perishable food and snacks. There are two refrigerators stocked with fresh food but Hollinger said it is difficult to balance student demand with the rate at which fresh food expires.

Next to the door, there is a box where students can submit feedback or suggestions on how to improve The Market. “[The Market] seems to be highly effective based on the feedback from students,” Hollinger said. “We need to increase the awareness of it, to make sure that everyone who might need it knows it’s here as a resource.”

The Market is an active member of the College and University Food Bank Alliance, which has over 700 members nationwide. According to this group, about 30 percent of college students are food insecure, and of these food-insecure students, 56 percent are working, 75 percent receive financial aid, and 43 percent have a meal plan — all of which are insufficient to cover their needs. The food bank alliance provides universities with informational “toolkits” to set up their own food pantries, which give advice on how to find sponsorship and how to calculate student need. According to, 55 percent of their members were able to successfully open a pantry in less than one year.

Many universities in the DMV area have on-campus food pantries, including American, George Washington, Georgetown, Howard, University of the District of Columbia, Johns Hopkins, Trinity Washington, University of Maryland College Park, George Mason, and Bowie State. Some of these pantries, such as George Mason’s “Patriot Pantry,” also offer toiletries and school supplies.

As of now, about 600 students have requested access to The Market at American University, but fewer use it regularly. The university has more than 7,000 undergraduates, meaning The Market serves fewer than 8.6 percent of students, just a small proportion of the survey respondents who had reported going hungry. As Hollinger put it, “Food insecurity on campus is something that the whole nation is really just starting to more proactively engage.” Students and individuals involved in this effort, like Hollinger, hope awareness and creative solutions like The Market will be able to make a big difference. 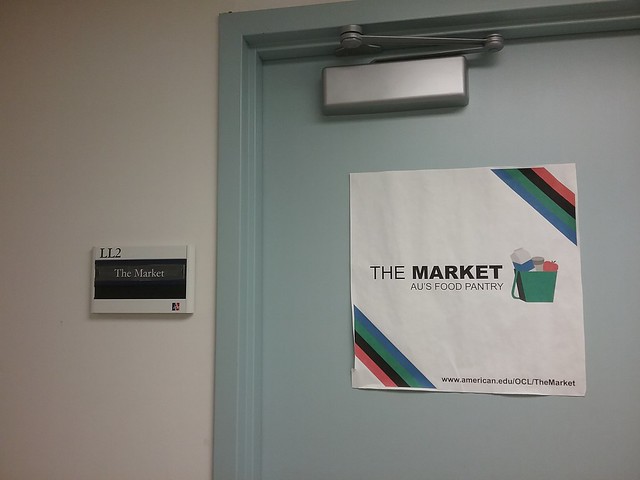 The Market is designed to be as private as possible in order to reduce any stigma that may prevent students in need from choosing to use it. Photo by Grace Collins