Affordable housing advocates from across the country protested in front of D.C.’s Trump International Hotel on June 27 against the president’s proposed rent increases for tenants and budget cuts to the U.S. Department of Housing and Urban Development.

The National Association of HUD Tenants, an advocacy group comprised of HUD-assisted housing tenants from across the country, organized the protest as part of its conference in D.C., demonstrators said.

President Donald Trump has been seeking to cut spending on affordable housing from the allocated $6 billion for fiscal year 2018 to $40 million, according to a budget draft obtained by Politico in May.

Passing cars honked their horns as approximately 40 people chanted, “Donald Trump, you’re fired.” Many held signs, including some asking Trump to stop the cuts and one requesting to “SAVE OUR HOMES!” 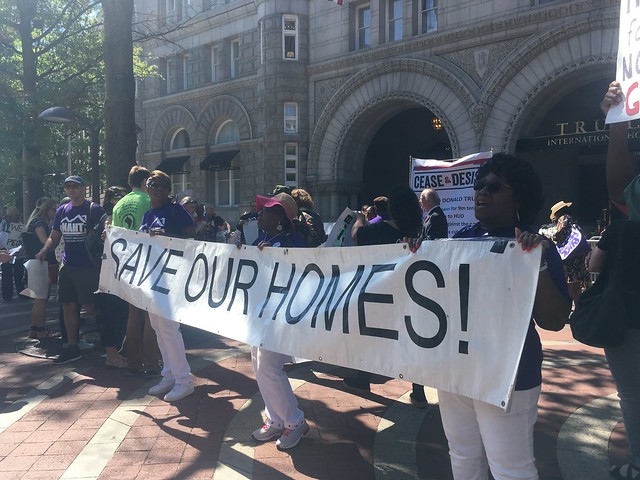 Michael Kane, the executive director of NAHT, said in an interview that the organization aimed to send a message to Trump to stop waging war against the poor in the country.

“People have come from all over the country — raised stray pennies to get here — to go up to Capitol Hill and tell them to just say no to Donald Trump and his immoral unjust vicious cuts to hurt the American people,” Kane said.

Kane added that NAHT was supporting the People’s Budget, a budget proposed by the Congressional Progressive Caucus that would focus on creating jobs, while taxing the 1 percent. 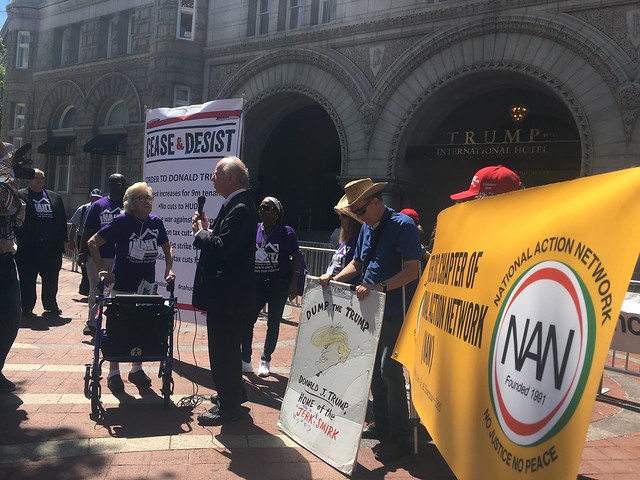 Michael Kane, the executive director of NAHT, addressed the crowd of demonstrators in front of Trump International Hotel. Photo by Justine Coleman

Affordable housing advocates from D.C. also joined the protest. Parisa Norouzi, the executive director of Empower D.C., said one of the priorities locally is to increase the budget and generally improve public housing.

“The chance to unite with other tenants from throughout the country is a good opportunity for us to create more unity in that struggle,” Norouzi said.

Paulette Matthews, a resident from the Barry Farm public housing community for 21 years, said she hopes the demonstration will show the constituents’ dissatisfaction with the housing process.

“I was born and raised here in the District of Columbia, and I feel as though I should be able to afford a place here,” Matthews said. “I shouldn’t be moved out for others to move in.”

After demonstrating from 10 a.m. to 11:30 a.m. in front of the hotel, Kane said NAHT advocates moved to the Capitol to view a presentation by Rep. Maxine Waters, D–Calif., and meet with various Congressional representatives to express their concerns. 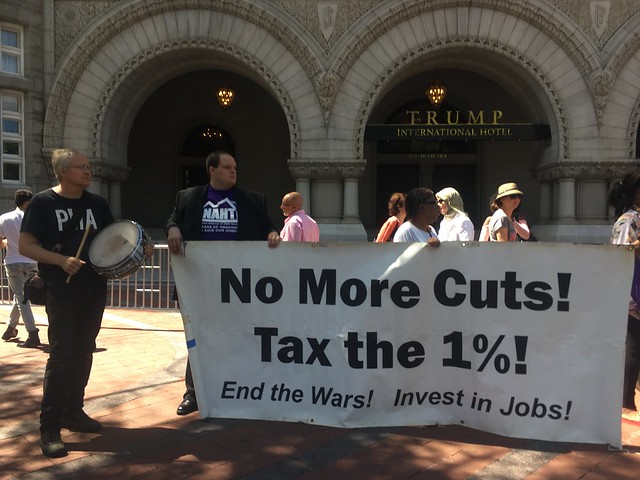