Advocates welcome back D.C. Council, asking how they will address homelessness

More than 30 advocates for people experiencing homelessness asked the D.C. Council whether affordable housing is on their agenda the morning of Sept. 17, the first day of the fall legislative session.

In a recent DCist article interpreting the council’s priorities this season, ending homelessness was not mentioned. This upset advocates from Miriam’s Kitchen, the Fair Budget Coalition, Pathways to Housing, the National Coalition for the Homeless, and other organizations who joined together for the Way Home Campaign’s third annual Welcome Back Council Walk Around in the Wilson Building.

Council Chairman Phil Mendelson’s office did not respond to requests to comment on priorities for the fall.

“Homelessness should have been addressed in their agenda,” said Alicia Gordon, a D.C. resident, “We did a lot of testifying, a lot of lobbying this summer. 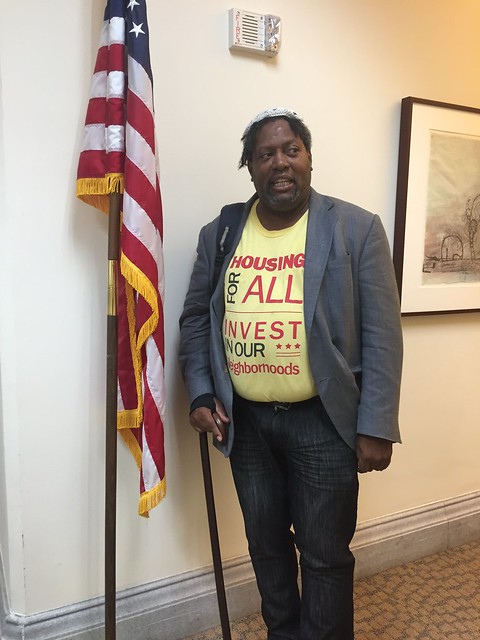 Supporters of the Way Home Campaign gathered and split into groups to informally meet with the councilmembers to ask for their support in ending chronic homelessness. “We are here to show the council that we have been working over the summer, meeting with our campaign partners, national experts, people experiencing homelessness, to really put our minds together to set forth a vision of what it takes for D.C. to end chronic homelessness,” said Jesse Rabinowitz, advocacy specialist at Miriam’s Kitchen.

The Way Home Campaign proposed a 2020 vision to end chronic homelessness to present to councilmembers. Citing data from the local “coordinated entry” system that is designed to match the most vulnerable people to available housing placements, the advocates said there are more than 4,160 individuals experiencing homelessness in D.C. over a one-month period. To fill the gap in housing resources needed to meet this need, the campaign proposed a budget of roughly 71.5 million more dollars put towards Permanent Supportive Housing (PSH), Rapid Rehousing (RRH), and Targeted Affordable Housing (TAH).

Mayor Bowser invested over $54 million in recurring funding to house nearly 2,000 vulnerable individuals through a combination of PSH and TAH during her first term. For her second term, advocates are hoping that council members invest in more proven interventions like PSH.

This is not the first time that The Way Home Campaign has proposed their vision to the D.C. Council. In April, over 100 activists gathered for the “March to Make Chronic Homelessness History,” which also included a trip to the D.C. Council offices in the Wilson Building. While staff members voiced support for the movement, the Council took no concrete action following this event.

“We know that that is a big number,” Rabinowitz said, “but it’s only about .5 percent of D.C.’s budget, and I think that it’s important that we are honest about the scope of D.C.’s homelessness crisis and aren’t scared of big numbers. With a $14.5 billion budget, no one should be homeless.”

While many councilmembers were busy with first day meetings and getting back into the swing of things, advocates were able to pass their proposal on to each office and speak to some staff members.

“You are preaching to the choir. We get it,” said Michelle Loggins, legislative counsel in the office of Brianne Nadeau, who chairs the Committee on Human Services. “But we can’t do it if we don’t have the budget. Tell the other councilmembers to put the budget towards human services.” 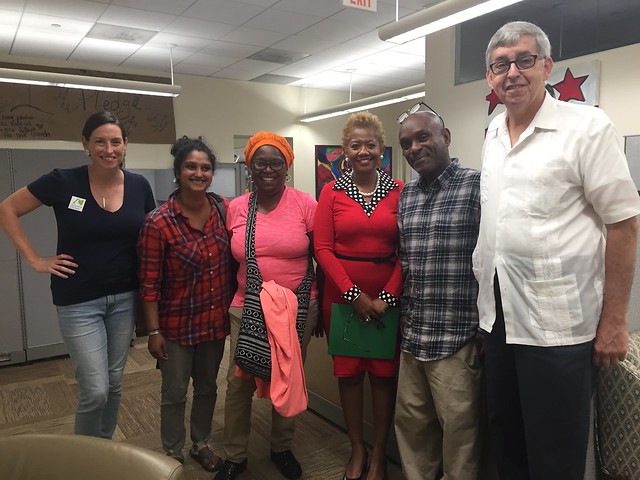 Other staff members echoed the same sentiment, taking the materials and expressing interest in hearing what advocates had to say. While some advocates left hopeful, others were more jaded.

“You hear the same story over and over,” said Ivan Rose, an advocate experiencing homelessness. “You know the story. They can do so much, they are going to propose this, the mayor will propose, etc. All this money the mayor has- I’ve been going to the meetings and hearings so many times.”

Staff members of Anita Bonds, Trayon White, and David Grosso said they would like to set up future meetings to address these issues and solutions.

“We got 5-7 councilmembers who basically support us, then you have those other councilmembers who are kind of neutral on a lot of issues,” said Robert Warren, a member of the People for Fairness Coalition and a Street Sense Media vendor. “A lot of times, those neutral councilmembers kind of hinder us.”

While Bowser’s first term resulted in an overall decrease in homelessness, a success, Rabinowitz and others who attended the demonstration stressed that there is urgent work to be done.

Other advocates echoed the same sentiment, emphasizing that not only is it urgent, it will save the city money. The Way Home campaign has already met with officials in the mayor’s office and nearly all of the D.C. Council offices. They plan to continue to attend hearings, schedule meetings with council members, and craft a full budget proposal, asking for more money for specific housing interventions to end chronic homelessness.

“It is so much cheaper to house people than to keep them in a state of survival mode,” Warren said. “We’ve already lost members at Street Sense [Media] this year. This is really hardening to me.”