Under a chilly morning sky on Dec. 22 at Freedom Plaza, activists woke up to coffee and bagels after sleeping that night on the plaza in a white pop-up tent. Members and supporters of the People for Fairness Coalition’s overnight Homeless Memorial Vigil sat down for a “teach-in” led by Monica Kamen, of the D.C. Fair Budget Coalition. About twenty people prepared to lobby D.C. councilmembers for more funding and action to end homelessness in the District.

Kamen quoted the late Martin Luther King Jr. to stress the need for the community to not think about budgets and funding as solely the government’s money: “A budget is a moral document.” 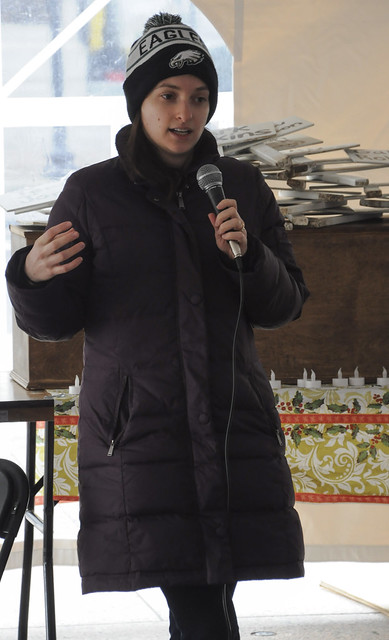 Monica Kamen speaking in front of the symbolic coffin and a pile of signs bearing the names of each person being remembered that day. Photo by Ian Erasmus

She said that the vast majority of government funds come from regular people, like those attending the training that day. “It’s your money, you want to know how it’s spent because it’s yours,” Kamen said. Looking over statistical information packets, the group looked at how the budget does not match the rising need of its most vulnerable constituents. Kamen pointed to the District’s “Rainy Day Fund,” a surplus from collecting more in taxes and revenue than what is used in order to keep the local government running, in case of a federal government shut-down.

“But it’s been pouring for a lot of people in the District for a long time,” said Kamen. “We cannot call it a success to house 250 people when we need to house 8,000.”

Jesse Rabinowitz, an advocacy specialist with Miriam’s Kitchen, reiterated a message he had presented when the vigil began the previous night.

“$31 million may seem like a lot,” he said, outlining how much money is needed to end chronic homelessness. “But that’s actually only 0.3% of the budget.”

Rallying together, a crowd of about twenty people marched over to the Wilson building and were met by festively decorated halls that were silent and empty. The D.C. Council Committee on Human Services had already left for the holidays.

But the Wilson Building grew loud with the cheer and focused energy of homeless individuals and supporters alike. Faced with closed doors, they slipped folders outlining the People for Fairness Coalition (PFC)’s budget recommendations. In the offices that were open, the group piled into the small reception rooms and spoke to staff members. 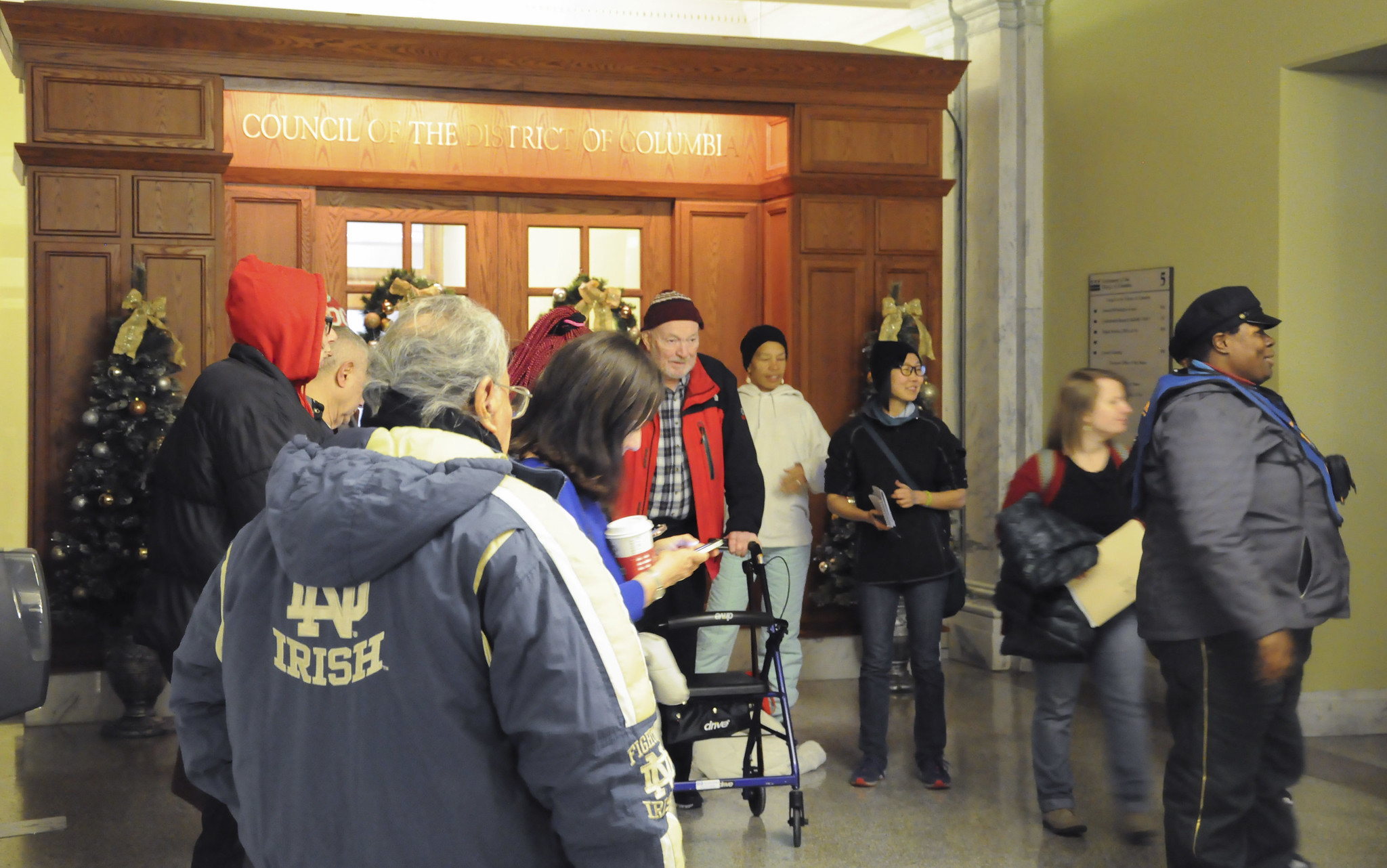 Advocates in the hallway outside of D.C. Council offices. Photo by Ian Erasmus

Reginald Black of PFC, who has been experiencing homelessness for more than a decade, emphasized again the $31 million in funding needed to end chronic homelessness and house over 1600 people. “That’s a drop in the bucket to help us,” he said, bringing up the paltry 0.3 percentage needed of the District’s budget. Black is also a vendor and contributor for Street Sense Media.

Jennifer McLaughlin of PFC addressed the need for a Downtown Services Center to help provide services such as case management, meals, laundry and shower facilities, especially in the light of the MLK Library 3-year closure for renovations, a building that had acted as a de facto refuge for many of the District’s homeless.

Townsend also highlighted the need to think “holistically” about homelessness and housing discrimination. “When folks are getting housed, how can we make sure that they’re not being discriminated against?” Townsend remarked how it has been an “uphill battle” to pass The Michael A. Stoops Anti-Discrimination Amendment Act of 2017 (B22-0397). The bill that has been sitting inactive in the Committee on Judiciary and Public Safety chaired by Councilmember Allen since At-Large Councilmember David Grosso introduced it in July. 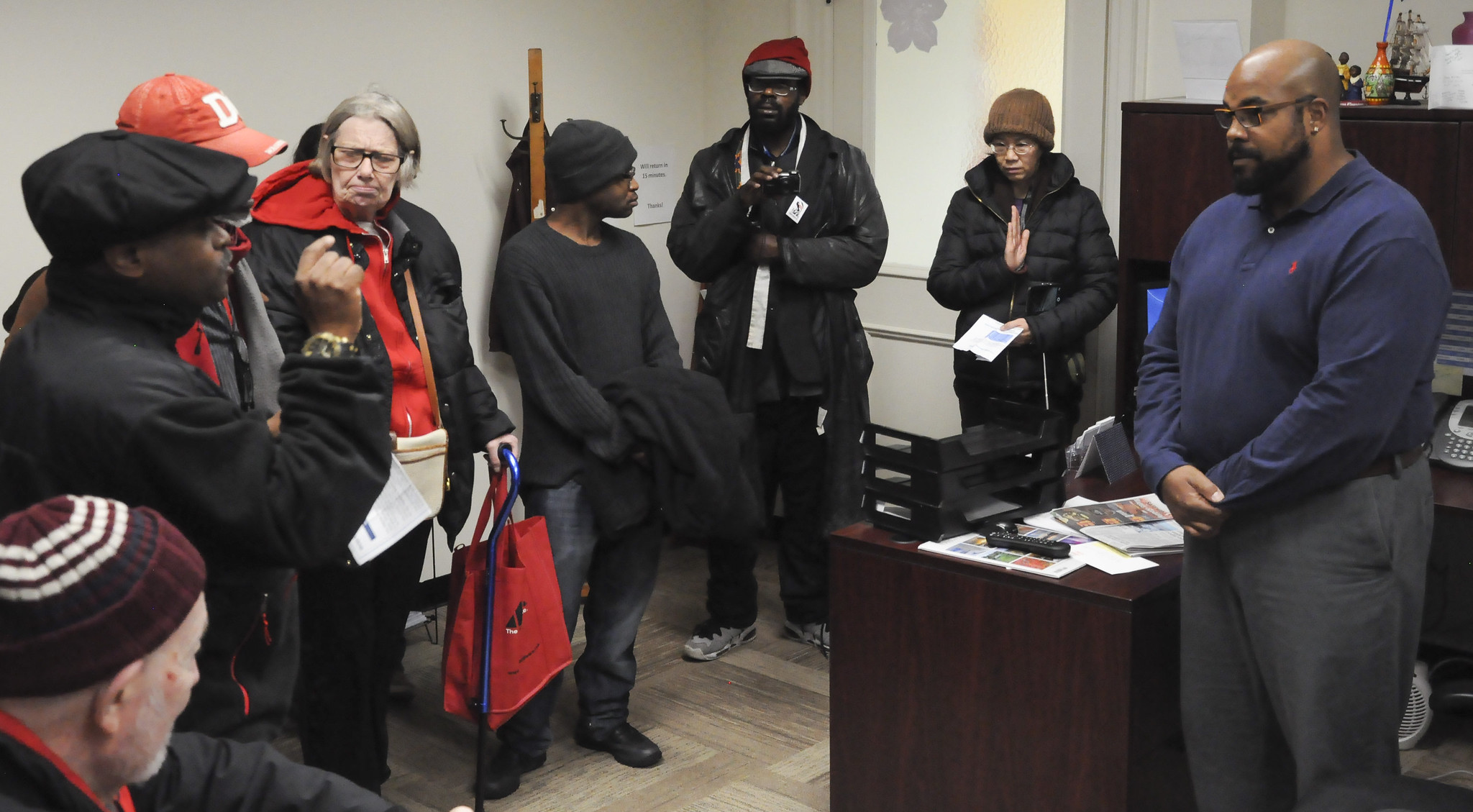 Upon hearing staff answers of how the advocates must take their issues to the specific D.C. Council committees, Townsend sharply responded, especially to Councilmember Allen’s staff representative: “You blew me off with that answer, we’re asking for you to at least relay the message–why do we always have to keep coming around and keep beating down the doors? You’re the constituent person; represent us!”

Robert Warren of PFC also lamented that, among the 45 people who “died without the dignity of a home” this year, at least 5 were veterans. “What a shame it is,” said Leo Lawless, a PFC supporter, “for our veterans to be dying homeless in this country’s capital.”
Rachelle Ellison, speaker and advocate for the National Coalition for the Homeless, shared her story about how she had slept in Franklin Park and Freedom Plaza for “seventeen years straight.”

After gaining housing in 2009, she was able to turn more attention to her health. She scoffed that only then was she seen by others as a “productive member of society.” Ellison became a D.C. Department of Behavioral Health certified peer specialist and works to help others struggling with various mental health issues.

“I will always be a part of this community. This is my family,” Ellison said.

Concluding their walk through the Wilson Building, the demonstrators returned to the white tent in Freedom Plaza to collect the symbolic casket and placards bearing the names of the deceased for a march to New York Avenue Presbyterian Church. A meal was provided ahead of an interfaith memorial service. 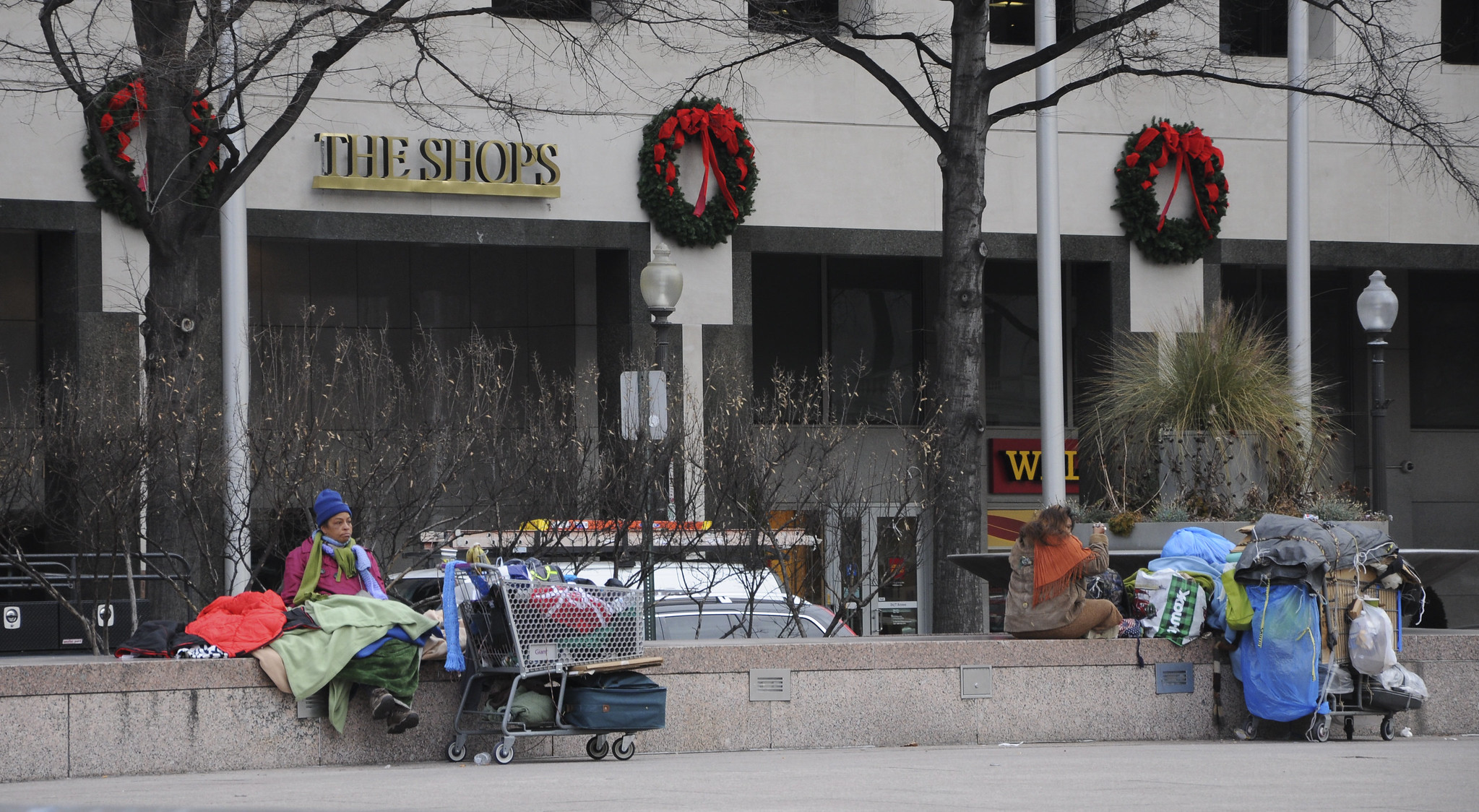 Faith leaders from Jewish, Muslim and Christian congregations spoke about honoring and remembering the dead. Candles were lit by attendees as a physical attempt to do so. Each speaker drove home the importance of coming together to support one another as a community, especially for the sake of people who are struggling.

A special dedication was given for Michael Stoops, whose portrait was displayed next to the symbolic casket. Stoops passed away in May after battling complications related to a stroke he suffered two years prior. “No one had more love for the homeless,” said Steve Thomas, a formerly homeless man who works with the Faces of Homelessness Speakers’ Bureau, founded by Stoops. The group pays homeless and formerly homeless people to share their stories with students, business leaders and other such audiences. It is a program of the National Coalition for the Homeless. “[Stoops] gave his entire adult life to helping others,” Thomas continued. 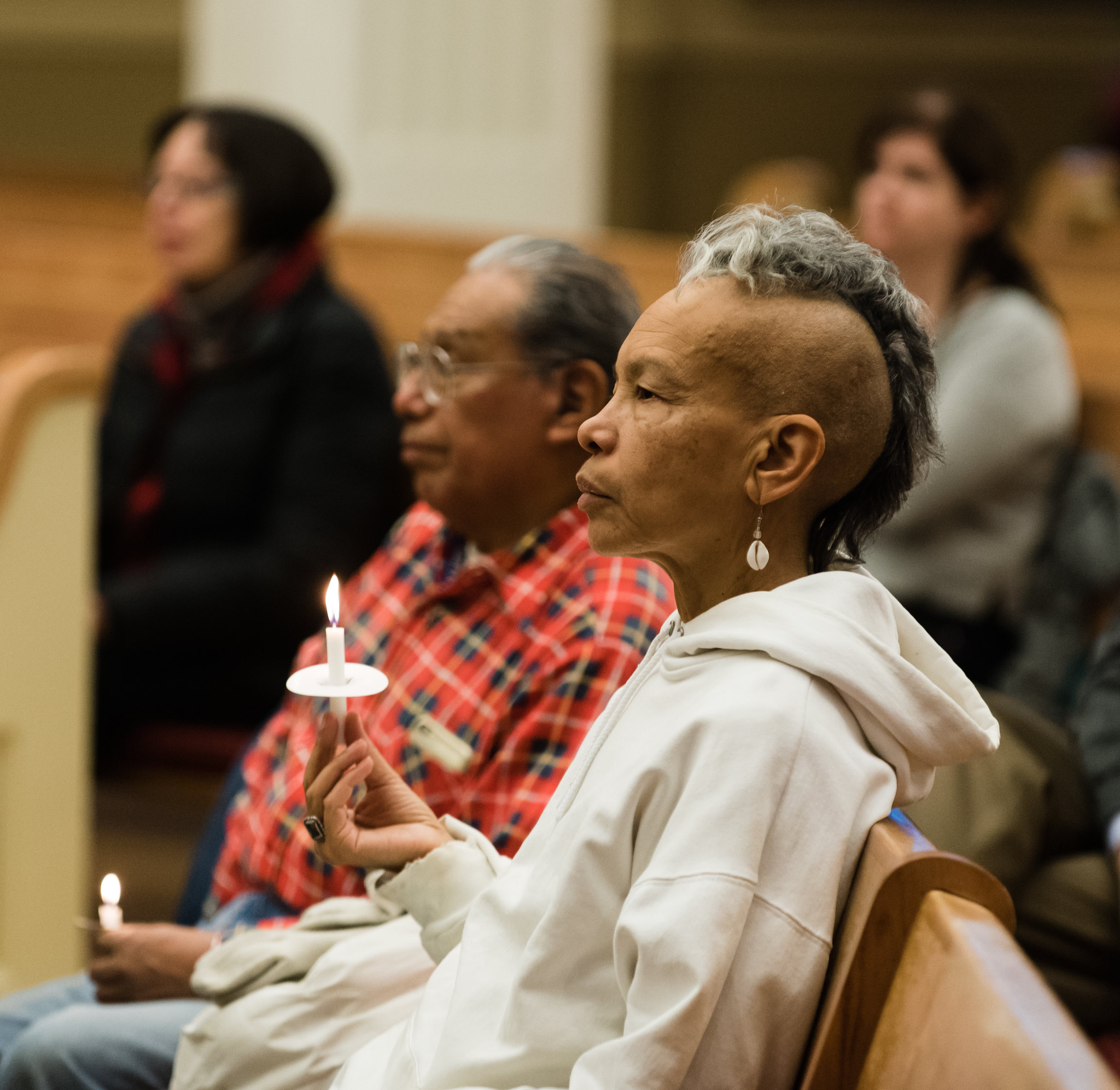 Candles were lit and held during a moment of silence and prayer for those being remembered. Photo by Rodney Choice

Stoops’ work with the National Coalition for the Homeless included establishing National Homeless Persons’ Memorial Day and serving as a founding board member of Street Sense Media.

After the memorial service, a handful of demonstrators who had participated in the overnight vigil carried what name placards they could back up 14th Street to Luther Place Memorial Church. The signs were driven into the ground there, to remain for several days.

“We let them die too,” said Reginald Black. He surveyed the names, sat down in front of the temporary memorials and turned to look each person in the eye. “We have to hold ourselves accountable, just like we try to hold these elected officials accountable … You let them die, homeless like me. I let them die too.” 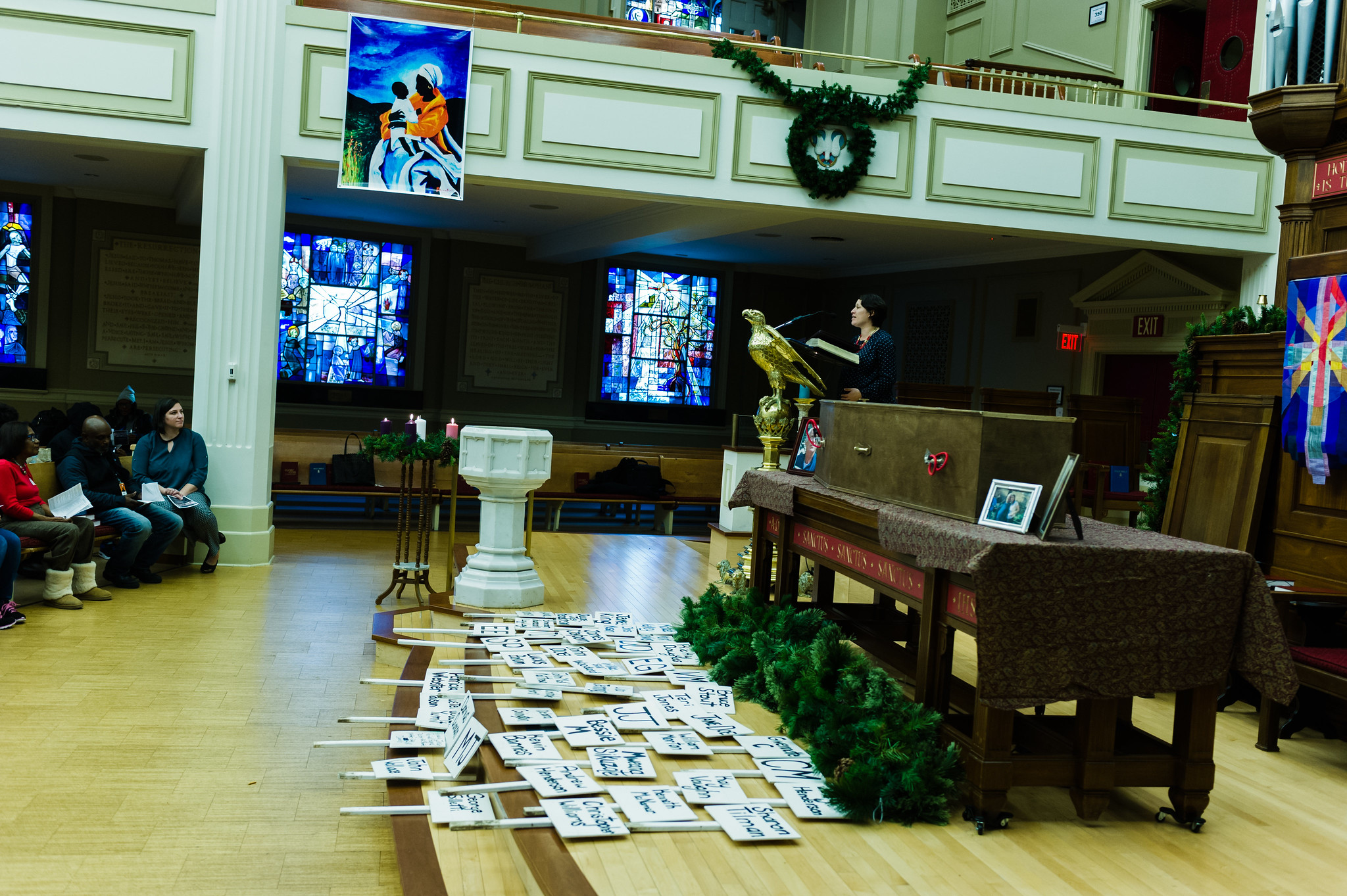