Activists began the eve of Homeless Persons’ Memorial Day gathered in Luther Place Memorial Church to remember the forty six people known to have died while homeless in Washington D.C throughout 2016.

Albert Townsend of the People for Fairness Coalition (PFFC) and Miriam’s Kitchen opened the event and introduced the first speaker, Monsignor John Enzler, president and CEO of Catholic Charities. Enzler said the most concerning aspect of his job are people who live on the streets. He reflected on a trip he took to Calcutta, India twenty years ago. He was struck by the number of people living on the streets and felt called to change that reality where he could. “Mother Teresa said it’s not right for people to die alone…to be abandoned,” Enzler said, going on to highlight concern for people surviving outside in the cold winter temperatures.

Enzler called the 46 people being mourned a “moral problem” of the city. The next speaker, PFFC Director Robert Warren, said that four of his organization’s members passed away this year while unhoused.

“A lot of these folks are middle-aged and are dying of preventable things,” Warren said, “If they were shown just a little more love, they would still be with us.” He said that many of the people he knew who passed away received vouchers shortly after their death, including Kanell Washington, whose housing voucher was approved 24 hours after his death.

“Housing is healthcare,” she said to the crowd. “Housing provides a safe place to go and be protected against the outside elements… housing provides a safe place to store medications.” One of Crosland’s patients received housing this year after thirty years on the streets. He reported that his breathing complications, caused by Chronic Obstructive Pulmonary Disease [COPD], have subsided now that he is indoors.

Crosland also spoke of the safety housing provides against the increased vulnerability to violence those on the streets face, including one of her former patients who was shot while unhoused.

“I’d like to honor today, not just those who have been unfortunate to lose their lives, but the walking wounded in our city,” Crosland said.

She told the crowd about a man she saw during her rounds of D.C.’s streets. He had been run over by a bus and had taken shelter in a Georgetown park, his crutches tucked under the picnic table he rested on top of. He did not want to leave the community of friends he had built in the park, and remained there even in freezing conditions.

“On a given night in D.C., over 1,500 individuals experience homelessness,” said Jesse Rabinowitz, an advocacy specialist at Miriam’s Kitchen. “Through historic racism and oppression, the overwhelming majority of these individuals are people of color.”

Rabinowitz said the best solution to chronic homelessness is permanent supportive housing, and ensuring all people have a home is a step towards racial equity. As he and other organizers learned this year, that also means ensuring that housing assistance works quickly.

Local advocates broke down the 46 names to be remembered to identify anyone who had been awarded housing assistance, but died before move-in:16 men. “I didn’t realize that so many people were dying after they were being matched to a voucher,” Rabinowitz said in an interview the day before the event. He expected many more had died prematurely in housing, saying that homelessness knocks 15 to 20 years off your life.

“With a budget of thirteen billion dollars…it is a moral failure that people are living and dying on the streets of D.C.,” Rabinowitz said. 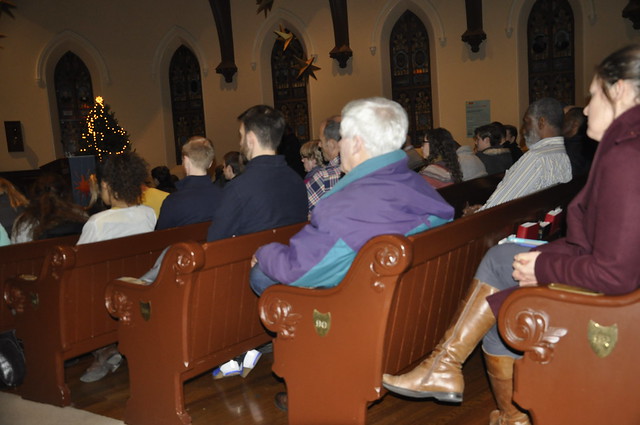 The crowd during speeches. | Photo by  Gwynette Smith

PFFC recommended specific budget priorities for the next fiscal year: 535 additional units of permanent supportive housing; 425 targeted affordable housing; and 343 units of rapid rehousing. These additional units are estimated to make up $17 million in the budget. Robert Warren said Mayor Bowser was invited to speak at the memorial, but could not attend. The group would visit city councilmembers the next morning.

“What I love about this vigil is it doesn’t let people forget,” said Steve Glaude, president and CEO of the Coalition for Nonprofit Housing and Economic Development.

*Two additional names of men who died in D.C. were added to the 46-name list during the memorial service that occurred the day after this event.

For ongoing coverage of the D.C. Homeless Persons’ Memorial Day activities and others around the country, including videos of each speaker at Luther Place, follow our Storify.