An interdenominational service was held at noon on Dec. 21, National Homeless Persons Memorial Day, to honor the local men and women who had died without a home over the past year. The memorial service took place at New York Avenue Presbyterian Church, where lunch had been provided for all attendees ahead of the service.

The grandiose sanctuary had high ceilings and a gold eagle podium. Demonstrators placed an empty coffin on the altar, carried through the street from the vigil held overnight at Freedom Plaza. The casket, and the 46 signs, each adorned with a name, signified members from the local homeless community that had passed away since last year’s memorial service.

Associate Pastor Alice Tewell thanked the crowd for coming and told everyone that she felt honored to be with those that call out for justice among homeless people. Homelessness can afflict anyone.

Rabbi Susan Landfield and Rabbi Hannah Spiro reminded everyone that just because someone is homeless does not mean that they are invisible. Spiro sang in Hebrew “El Malei Rachamim,” a prayer typical of Jewish funerals.

All faith-based leaders drove home the fact that no matter anyone’s religious background, everyone had the right to be housed.

“A lot of times when you’re homeless, you tend to forget that you have worth,” said Steve Thomas, speaking to the crowd about his 17 years spent homeless and his gratitude for the love and support he received during that time. “Every year I thought it would be the year they said my name [at the memorial],” 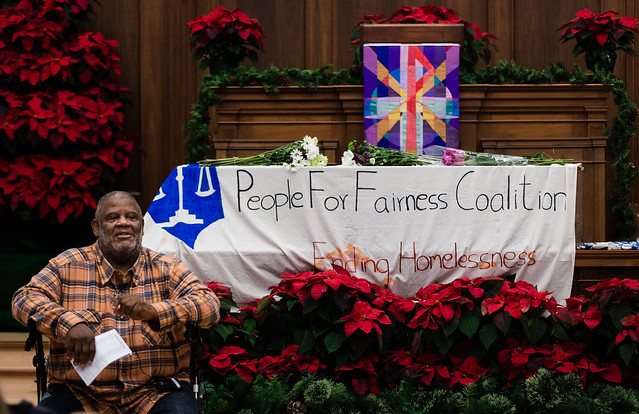 Reverend Beth Braxton of The New York Avenue Presbyterian Church ended the memorial with “go from this place thankful for the love of strangers.”

Attendees then lumbered outside in spurts of two or three people at a time. The crowd had dwindled significantly from the previous night and those who remained were sore and stiff. The signs naming the deceased were divided amongst those remaining for a final procession back to Luther Place, where the vigil began the night before.

On the walk, chants and songs erupted from the few walkers. As much noise that could possibly be mustered from the group emanated through the city streets.

The two-day National Homeless Persons’ Memorial observance came to a close on Dec. 21 when the name placards were placed on the symbolic gravestone commemorating many D.C. community members, including famed activist Mitch Snyder.